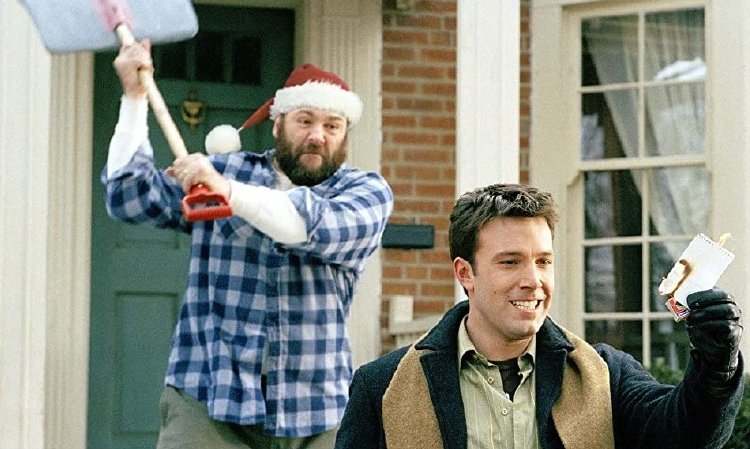 It is Christmas time and wealthy advertising executive Drew Latham (Ben Affleck) suddenly realizes just how lonely he is. After a tiff with his girlfriend he decides to return to his boyhood home to try to recapture the old Xmas spirit. But, it’s not his family’s home any more. Now, the house is owned by the Valco family. Undeterred, Drew offers them a not-so-small fortune if he can use the family to have the treasured holiday his way in “Surviving Christmas.”

Drew has had problems over the years with celebrating the yuletide holiday. This year he offers his girlfriend, Missy (Jennifer Morrison), the chance to fly to Fiji for Christmas but she balks at the thought of being away from her family on that special day. Despondent, he tries to corral Missy’s shrink, Dr. Freeman (Stephen Root), who is trying to get away on his vacation, for advice. The doctor tells him to write all of his grievances about family on a piece of paper, go to a place from his childhood, set the paper on fire and say, “I forgive you.” Drew sets off to his old former homestead to heed the doc’s advice.
Tom and Christine Valco (James Gandolfini and Catherine O’Hara) see Drew skulking around their house and, as he sets fire to his list, Tom beans him with a snow shovel. The Valcos are about to call the police when Drew makes them an offer they cannot refuse – for the tidy sum of $250000, he will become their “son” and celebrate Christmas the old fashioned way. A
contract is drawn up, giving Drew carte blanche over the Valco household until 11:59 PM on Christmas day. With visions of sugar plums and a big wad of cash forthcoming, the Valcos accept Drew with open arms. But, not so for Alicia (Christina Applegate), the Valco’s home-for-the-holidays daughter.

Drew’s list of requirements to recapture the Christmas spirit begins with shopping for a Christmas tree. On the way, he hands Tom a Santa hat to wear (which he reluctantly dons), selects a huge tree and, once decorated, makes his new “dad” sing “O, Christmas Tree.” From here, Drew’s demands for holiday spirit become increasingly intrusive, including snowball fights, tobogganing, a trip to see Santa, Christmas shopping and roasting chestnuts. Through all this, Drew blissfully ignores the fact that there are marital problems flaring between Tom and Christine.

Director Mike Mitchell and a gaggle of screenwriters create an amusing little Christmas tale that, unfortunately, is second tier to such modern Xmas classics as “A Christmas Story.” Ben Affleck gives a forced, almost desperate performance as a man trying to recapture a time in his life when things were normal and happy – until we learn his truth. James Gandolfini puts aside his Tony Soprano persona as Ted Valco and puts on a working-class demeanor, using a classic slow burn as he slowly and steadily becomes increasingly aggravated by his new “son.” Catherine O’Hara does a decent job as Drew’s reluctant surrogate mom but has done better in other films, especially as a member of Christopher Guest’s ensemble players in
“Waiting for Guffman,” “Best In Show” and “A Mighty Wind.”

Christina Applegate plays the dual role as Drew’s opponent and romantic interest, most of the time looking disgusted with her father’s greed and Drew’s intrusion in her home at Christmas. Josh Zuckerman, as Drew’s temporary brother, Brian, plays the teen as put upon by his parents and “brother” and suffers the most from the intrusion. Bill Macy gets a couple of chuckles as Drew’s rental grandfather, Doo-Dah, as does Sy Richardson as Doo-Dah’s understudy. Udo Kier, as an advertising photographer called in to photograph the made over Christine, gets to chew the scenery, if only for a few brief minutes.

Techs are on par with the film – nothing great, but nothing bad, either. Production designer Caroline Hanania does an exemplary job in showing the garish, over lighted and over decorated idea that Drew has about a traditional Christmas.

“Surviving Christmas” is a mildly amusing concept that never gets above its two-dimensional nature. None of the characters comes across as real and the manufactured script never draws you in. I guess this bodes for an early start to the holiday movie season. Like the holiday itself, this one comes along too early