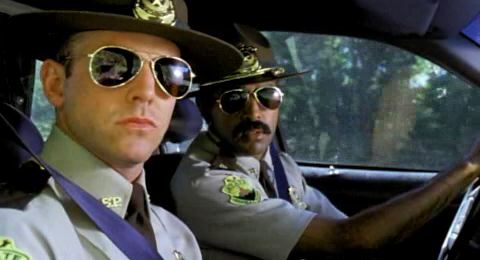 On a remote stretch of highway in Vermont "somewhere near the border" the members of the state trooper barracks are over-enthusiastic and under-stimulated. To pass the time, they play head games with the road denizens that transit their turf and, generally, have a good time. But the threat of state budget cuts by Governor Jessman (Lynda Carter) may put the staties' jobs in jeopardy in comedy troupe Broken Lizard's film debut, "Super Troopers."

Vermont State Trooper Captain O'Hagan (the hilariously game Brian Cox, "L.I.E.") is under a lot of stress. Under normal circumstances, he's in charge of a team that favor unusual methods of law enforcement when they're not chugging maple syrup or getting into scraps with the local Spurbury Police, but now budgets cuts mean his unit may be facing extinction. With a visit from Governor Jessman (Lynda Carter, TV's "Wonder Woman") imminent and a recent homicide pointing towards local drug trafficking, O'Hagan must prove his team's worth in "Super Troopers."

Written by and starring comedy troupe Broken Lizard, "Super Troopers" shows evidence of talent and ability, but is too inconsistent in the comedy roundup. While this one gets off with a good natured warning, future Lizard endeavors will need to adhere more closely to the laws of laughter.

Director/star Jay Chandrasekhar is incredibly assured in front of the camera and keeps his ensemble on the line between control and anarchy. His Thorny, bearing a remarkable resemblance to Richard Pryor, is the most level headed, albeit no less wacky, member of the gang who is partnered with new guy Rabbit (Erik Stolhanske), while Foster (Paul Soter) finds ingenious ways to get in a little fishing while on duty.

The film's opening sequence is it's funniest when Thorny and Rabbit play head games with a trio of stoners. As the back seat kid swallows evidence (2 bags of pot and some mushrooms), Thorny and Rabbit seemingly let them off only to continually reappear. Once they get the kids in their car, they're forced to call in Foster to assist with a high speed chase, which turns out to be their colleague Mac (Steve Lemme) cashing in on a practical joke. Mac is the group's complete and utter lunatic. The group's last member, Farva (Kevin Heffernan), is an overweight, obnoxious screw up who's been consigned to dispatch duty.

As O'Hagan goes up against Spurbury police chief Grady (Daniel von Bargen, "The General's Daughter"), Foster falls for one of their officers, Ursula (Marisa Coughlan, "Freddy Got Fingered") while his colleagues play games with some Euro-kinkies caught in a stolen Porsche, test bulletproof athletic cups at the shooting range and rip up fast food establishments that slip unappealing extras into their burgers. Their shenanigans reach a climatic point when the whole drunken team, led by O'Hagan clutching an empty whiskey bottle, find their foes in a compromising position.

"Super Troopers" has its moments, with Cox, Chandrasekhar and Lemme providing the bulk of them, but too many of its jokes were arrested in development.

With the proposed promise, from the press material, of a "joke every six seconds" the stage is set to challenge the likes of "Airplane!" and "Animal House." "Super Troopers" starts off with a bang as a trio of tweenies head toward the Canadian border for some "French fries and gravy" while doing a big doobie on the ride. Suddenly, cruising along beside them is a state trooper cruiser with a pair of very serious looking cop. The boys panic and force one of their numbers to eat their entire stash, including some magic mushrooms. The fast paced head f**k is a wry, funny sequence that harkens back to drug-addled antics of Cheech and Chong and promises much more than the film, in the end, delivers.

When the action moves away from the highway hi-jinks of Lieutenant Thorny (film's director Jay Chandrasekhar) and troopers Mac (Steve Lemme), Foster (Paul Soter), rookie Rabbit (Erik Stolhanske) and misfit Farva (Kevin Heffernan) it slows down to more conventional levels. The "plot" involves state fiscal problems that threaten to shut down the troopers' station in favor of the hated locals, the Spurbury police department. The rivalry for control of the coveted 50-mile stretch of state road has caused a rift between the two law enforcement organizations led by trooper commander Captain O'Hagan (Brian Cox) and Spurbury Police Chief Grady (Daniel Van Bargen).

Then, the day-to-day routine of busting speeders is altered when the local cops find the body of a dead woman in a Winnebago, along with an angry pig, and the staties bust a truck loaded with bales of pot with a strange monkey logo. The state troopers think that the bust will ensure that their station will remain on the active books but that is not the case. Fortunately, circumstance plays in their favor and the requisite happy, goofy ending ensues.

The joke quotient doesn't hit the promised "every six seconds" as the story pulls away from the visual gags of the troopers playing head games with civilians and each other. The plot devices of saving the barracks from fiscal cuts, solving the murder and busting the dope dealers overshadow the earlier, rapid-fire joke machine that started the movie. The Lizards even throw in a romance between one of their numbers and a pretty local policewoman - the rivalry between the two forces doesn't include the opposite sex and Ursula (Marisa Coughlan) takes sides with the troopers. The filmmakers should have taken a page from the "Airplane!" school of comedy and pushed the plot farther back and concentrate on keeping the joke flow going full blast. Instead, the stream becomes a trickle as the "plot" takes hold.

Visually, the film maintains a high quality and looks good from a tech viewpoint. Broken Lizard has a good deal of comedy talent and all of the members, especially Jay Chandrasekhar, have a good comfort level in front of the camera. The troop has a ready made audience in the college community and "Super Troopers," while not a great film, does establish the group's big screen credentials. There are laughs, though not as many as it needs, and, if you're in a mind set for goofy comedy, the troopers will entertain with their gross outs, bawdy comedy and head games. It should open some doors for the Lizards, too.