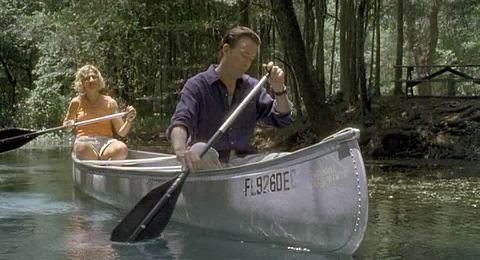 As Plantation Island's Chamber of Commerce rep Francine Pinckney (Mary Steenburgen, "Life as a House") tries to create a tourist-drawing tradition with "Buccaneer Days" week, resort developers have formed a pincer attack on the two sides of the island. On one side is Marly Temple (Edie Falco, "The Sopranos"), who hates running the Sea-Vue restaurant and motel her legally blind father (Ralph Waite, "Cliffhanger") proudly owns. On the other is the black community of Lincoln Beach, where disgraced beauty queen Desiree Perry (Angela Bassett, "Passion Fish") has returned to make peace with her mother after many years in writer/director John Sayles' "Sunshine State."

After delving into the socio-economic problems of an Alaskan fishing town in "Limbo" and a Texas border town in "Lone Star," Sayles repeats his formula in a faded Florida beach town with distinctly lesser returns. After setting several storylines sprawling, the screenwriter concludes his story by figuratively wadding up what he's written and throwing it into the wastepaper basket.

Marly's story is the most interesting, mainly because of the actress who's playing her. Fed up with running the family business, Marly is nonetheless loyal to her dad and antagonistic to the oily developers sniffing around. She can't help but be interested, though, in the landscape architect they've brought along. Jack Meadows (Timothy Hutton, "Beautiful Girls") explains that he remolds the terrain to bring out its natural beauty and has a similar effect on Marly, who peaked early as a mermaid at a roadside attraction. Now, Marly waddles about in cutoffs and halter tops taking advantage of the local happy hour, but her forthrightness is refreshing.

Desiree's appearance, however, makes no sense from the onset. Bringing along her new, uncomprehending, husband from Boston (James McDaniel, TV's "NYPD Blues"), she professes to hate who she is in her hometown, not trust her mother (Mary Alice, "Malcolm X") and wishes to leave soon after arriving. So just why is she there? To reconnect with the man who sent her scurrying at the age of fifteen - Flash Phillips (Tom Wright, "Passion Fish"), a former football player manipulating his former neighbors in pursuit of the almighty dollar.

Sayles throws a multitude of characters into his mix, but most of their storylines go nowhere. As self-absorbed Francine grimaces through one lame Buccaneer event after another, her banker husband Earl (Gordon Clapp) alternately attempts suicide or embezzlement. Marly's mom and bartender speak supportive words about her ex (Richard Edson, "Stranger Than Paradise"), but when we meet him, clearly he's a buffoon. Marc Blucas makes so little of Marly's golf pro boyfriend, that we hardly notice him leave the picture. A Native American Indian laborer has a scene or two that illuminate nothing. Desiree's elderly mother boards a young arsonist, one of whose crimes opens the film, to give McDaniel something to do. Activist Dr. Lloyd (Bill Cobbs, "Random Hearts") sanctimoniously pesters Desiree and the residents of Lincoln Park. At least Delia Temple (Jane Alexander, "Testament") realizes the futility of her community theater efforts - she's the East Coast liberal intellectual Sayles must have felt a need for, Dr. Lloyd's counterpart.

Alan King's golf game is like stand up punctuating the action. After a beautiful and symbolic underwater shot of Marly swimming, the perfect ending for this film (after the stunningly abrupt and ridiculous wrapup that precedes it), Sayles makes the horrible decision to cut once more to the golfing geezers for a coda that visualizes his real estate themes. He makes a brief appearance to almost get hit by their golf ball which would have been poetic justice.

"Sunshine State" feels flabby and looks as ugly and run down as the Sea-Vue. Sayles does attract fine actors, though, and Edie Falco's Marly is particularly memorable.