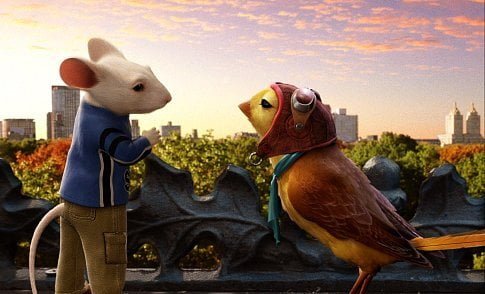 "Stuart Little 2" is the rare sequel that betters the original movie. As we already know these characters, the filmmakers put us immediately into the action, often shown from Stuart's point of view. Establishing both George Little's newly fractured attention span and a new mode of transport for Stuart, our intrepid mouse mistakenly takes off from the dining room table in a model biplane when George dumps the project in favor of videogames. Mrs. Little opens her front door to be buzzed by her diminutive son and becomes hysterical. Stuart crashes in Central Park. George is dismayed by the wreck.

When Margalo drops into Stuart's car and must be saved from Falcon (James Woods), the predator following her, Stuart is smitten and invites the homeless bird to stay with the Littles. But just like the heroine of "Vertigo," the movie they watch from a makeshift drive-in, Margalo is not what she seems. First Mrs. Little's diamond ring disappears, then the bird. Stuart, suspecting nothing, blackmails Snowbell (Nathan Lane) into helping him save Margalo from the Falcon.

"Stuart Little 2" showcases solid themes of friendship, loyalty, independence and striving for one's dream. Stuart's need to cut Mrs. Little's apron strings is reflected in Margalo's desire to fly south. While kids should be delighted by the colorful, quick-paced adventures, parents are kept entertained by adult references to stripped cars and the Hitchcockian recreation of Jimmy Stewart's limbs akimbo fall.

The superior production design spins some new twists within the Little's Utopian Central Park brownstone. Stuart now has an 'upper bunk' from George which is more like an entire dollhouse bedroom. A backyard birdbath becomes ideal for mouse-size skateboarding, a kitchen sink drain a cavernous challenge. Costume design is also notable, from Stuart's soccer-themed pj's and mouse ear-shaped yellow rain hat to the elegant ensembles worn by Geena Davis.

"Stuart Little" received an Oscar nomination for its special effects and so should this one. From the muscle movement around Stuart's eyes to the intricacy of feather movement on Margalo and Falcon to the CGI used to make Snowbell and his buddy Monty (Steve Zahn) talk, animation is flawlessly executed. When Stuart applies the brakes in a school corridor, red brake lights reflect upon the tile floor. The live actors are seamlessly integrated with the created ones.

David and Laurie are more endearing and enjoyable this time around, while Michael J. Fox, Nathan Lane and Steve Zahn all repeat their wonderful characterizations. Melanie Griffith is breathily feminine as the femme fatale who falls while Woods always rewards when cast for villainous voicing.

"Stuart Little 2" is as big as it feels, and its heart is delightfully big.

In 1999 a young mouse named Stuart (voice of Michael J. Fox) was adopted by the Little family and the diminutive guy found himself a home. Now, Stuart drives to school, plays soccer and has a good life, except his big brother George (Jonathan Lipnicki) has found a new friend, leaving his adopted brother on his own. When a pretty little injured bird named Margalo (voice of Melanie Griffith) quite literally falls into Stuart's lap, he learns that life is an adventure in "Stuart Little 2."

I was pleased as punch when the first Stuart movie hit the big screen as it presented the E.B. White character in a technical tour de force that blended live action and computer-generated animation to create a believable fantasy world. Now, three years later, the sequel, helmed by the original's director, Rob Minkoff, comes to the screen and it is superior in nearly every way.

Stuart is firmly entrenched as a member of the Little family but, since his baby sister was born, his adopted mom (Geena Davis) has become even more overly protective of her middle child. Mrs. Little frets that Stuart, who has a liking for soccer, will get hurt playing with the big boys, but dad (Hugh Laurie) knows that his rodent son needs to be empowered despite the dangers of being a little Little. When brother George makes friends with a neighborhood boy, Will (Marc John Jeffries), he leaves Stuart to fend for himself.

Stuart, lonely but resourceful, is driving his tiny car home from school one day when Margalo unceremoniously lands in the front seat. The attractive, petite bird has an injured wing from the fall, after being chased by a mean old falcon (voice of James Woods), and Stuart offers his home until she can recuperate. But, Margalo has a secret past and, once better, disappears with a precious family heirloom. It becomes Stuart's mission, with the reluctant help of housecat Snowbell (voice of Nathan Lane), to rescue his new friend from what he knows is danger. It is an exciting adventure that takes to the skies over Manhattan in an aerial battle the likes of which have never been seen before.

"Stuart Little 2" is superior to the original in all ways (except the idea isn't all brand spanking new, now). The filmmakers have taken the computer imagery to new heights as they seamlessly meld it with the live action into a lively, exciting fantasy world. The attention to detail, the flow of Stuart's hair or Margalo and Falcon's feathers, is realistic. The bird movements have obviously been studied closely to create believability in the newest critters in "Stuart Little 2." Other techs - cinematography (by Steve Poster), costume design (by Mona May) and production design (by Bill Brzeski) - are right up their with the F/X in the quality department.

The characters, both live and imagined, are first rate for the subject matter. Michael J. Fox gives voice to Stuart in a lively, endearing way that makes the mouse not a mouse but a person - albeit a furry one. This time around, Geena Davis and Hugh Laurie are even more kind, understanding and supportive as Mrs. And Mr. Little, providing the necessary balance of parental protectiveness and empowerment for their kids. Nathan Lane reprises the voice of Snowbell and has an expanded role in "Stuart 2," providing copious comic relief as the pampered fraidy cat that Stuart has come to trust. Melanie Griffith puts an affectionate spin on the voice of Margalo so you can understand why her new friend would have a crush on her. James Woods is dead on as the sinister Falcon. Steve Zahn gets good laughs as alley cat Monty who helps Stuart in Snowbell in their quest to find Margalo (and gets a pleasant surprise in the end).

The screenplay by Bruce Joel Rubin (from the story by Rubin and Douglas Wick) does an excellent job of carrying forth E.B. White's fantasy tale, providing original and imaginative material for the sequel. There is maturity here that goes far beyond the bounds of a children's movie. Reference and parallels to Alfred Hitchcock's "Vertigo," used to compliment the budding romance between Stuart and Margalo, will go right over the kids' heads. This aspect, and other adult themed nuances, proves to make "Stuart Little 2" the kind of flick that I can recommend to us big people that don't have children. If you are an adult that enjoys CGI and other special F/X, and appreciate intelligent writing (even if its principle target audience is the under 10 crowd), I can heartily recommend this tale of a mouse with a heart as big as all out doors.

This charming, intelligent, entertaining and fun flick represents true family entertainment that will give pleasure to all ages.