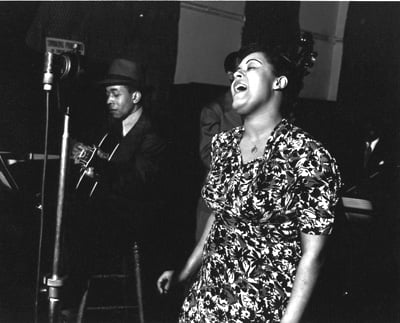 In a one hour running time, Katz explores how a white Jewish schoolteacher came to write the song which Holiday claimed, incorrectly, was written for her and which was later adopted by the Civil Rights movement. "Strange Fruit" combines elements of the biopic with an exploration of the birth of New York's jazz clubs and the history of Southern lynching. This film would make a terrific companion piece to "Amandla!," the documentary about Apartheid protest music or "The Murder of Emmet Til," which gives an account of the murder of a young black boy in the south which may have been the event which sparked the Civil Rights movement.

Abel Meeropol, who is also known as the man who adopted the children of Julius and Ethel Rosenberg after their execution, originally wrote the lyrics as a poem, "Bitter Fruit," for a teachers' union. The Tin Pan Alley movement, where Black music was being produced by white artists like Irving Berlin and George Gershwin, gave him the idea to set the words to music. Billy Holiday, who was currently a sensation at New York club Cafe Society ('the wrong place for the right people'), was approached to record the song and it became her lynch pin, even after having been recorded by many other artists, Nina Simone and Carmen McRae included. Its lyrics were read at Congress in support of Federal anti-lynching legislation which failed to pass in the years following WWII, then became a backdrop for the Civil Rights movement, resurfaced in the 1970s for 'Rock Against Racism' and was played at Meeropol's funeral in 1986.

Katz uses archival footage, horrifying documents of lynchings, still photographs and charming old reel-to-reel recordings of Meeropol entertaining his children to create his song history, but most powerful of all is the song itself. Peter Seeger states 'sometimes a short song all of a few minutes can have as much impact as a long novel,' which Katz vividly portrays with his smooth cutting among different singers performing the song. Although Holiday is presented as unfairly claiming more than her due for the song's genesis, old BBC footage of her singing makes a powerful statement.

When Katz moves into the present day at the end of his film, its focus is diffused, but he rebounds with a sharp observation by Meeropol's son, who states that 'until the last racist is dead, "Strange Fruit" is relevant.'

"Southern trees bear a strange fruit,
Blood on the leaves and blood at the root
Black bodies swinging in the southern breeze
Strange fruit hanging from the poplar trees"

These poignant words were written in the late 30's by liberal, Jewish, New York educator Abel Meeropol (under the name of Lewis Allan) as a song to protest one of the worst examples of human behavior - the lynch mob. In 1939, singer Billy Holiday recorded these words in what would become her signature piece until the end of her all-too-brief life.

Documentary filmmaker Joe Katz takes this one song and tells the stories of Meeropol's fascinating and little known life, the rise and fall of the Lady, Billy Holiday, and the protest movement that was created by the words to Meeropol's haunting song, Strange Fruit.

Using the recollections and reminiscences of first-hand participants in the anti-lynching movement from both the white liberal and black society of the 30's and beyond, Katz effectively fills this less than an hour long documentary with a wealth of information about a little-known, but powerful, song and the movement it spawned. The song was first performed by Meeropol's wife at a school function and came to the attention of black musicians, especially Billy Holiday, who brought it to national attention. Since then, the song has been performed many times and caused the lives of those involved to change, sometimes drastically, as in the case of folksinger Josh White, whose career was destroyed by the McCarthyism of the day for his performance of the protest song.

Talking heads interviews by protest folksinger Pete Seeger, Amina Baraka, Abbey Lincoln, Cassandra Wilson and Meeropol's sons, Michael and Robby, are effectively used to convey the meaning of the songwriter's words and the impact they had upon both white liberal and black society in America during those turbulent racial times. Katz also injects the political mood of the time with the Red Scare that whipped the country into a frenzy to find Commies everywhere. The accusatory tone and vivid, poetic words of black suffering that Strange Fruit evokes gives credence to the statement by Seeger - "There are no great movements that do not have great music" at their core.

"Strange Fruit," at about 57 minutes long, will fit an effective niche in the PBS world and should be mandatory viewing by all students old enough to understand the meaning and importance of the haunting song.