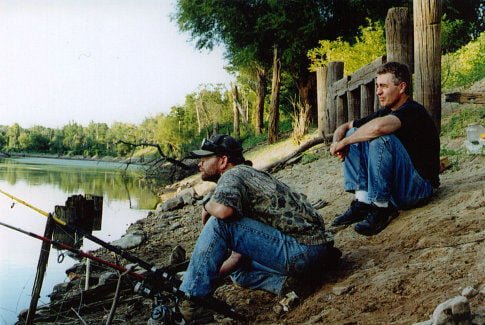 'The past is never dead.  It's not even past.'  - William Faulkner

Steve James brought us into the hearts minds of budding young basketball players in his acclaimed documentary film "Hoop Dreams." With his latest documentary, he starts off to resolve some longstanding loose ends from his past as he journeys back to Pomona, Illinois, where, many years ago, he became an Advocate Big Brother to a troubled young boy. What James thought was going to be a personal catharsis turns into something quite different for the filmmaker and for his subject, "Stevie."

In 1982, "Hoop Dreams" director Steve James became a Big Brother to Stephen Fielding at the urging of his social worker wife Judy. James left for the big city to pursue his film career, vowing in his journal to maintain contact with the boy. He broke the vow. Ten years later, James returned to Pomona, IL to begin documenting how a man was shaped from the troubled boy known as "Stevie."

James meets a twenty-three year old who looks older than his years. He's been married to an older woman and divorced, is engaged to a slightly disabled woman, Tonya Gregory, and lives with his grandmother-in-law Verna. Verna never wanted her son to marry Stevie's mother Bernice, who was already pregnant with the boy when she met Verna's son, and Verna's hatred for Bernice has been so instilled in Stevie that he likes to brag about the time he tried to kill his mother by cutting her brake lines. Just as James has caught up with the past decade of Stevie's life, he's interrupted by unforeseen events and doesn't return for another two years. Now Stevie is charged with sexually molesting his 8 year old cousin and James finds himself a character in his own documentary, which has taken a decidedly unexpected turn.

Stevie is an intriguing documentary subject and James does a beautiful job of presenting him and all his opposing influences. The boy who was beaten and abandoned by his mother (although she lived next door as he grew up) and raped in foster care also had a staunch defender in half sister Brenda, a loving grandmother and wonderful memories of his first foster parents, who he responds strongly to when James arranges a reunion. It is pretty clear that Stevie is guilty of the crime he is accused of, yet we never lose sympathy for the man, no matter how exasperating his behavior.

But Stevie is not the only focus, as James fully fleshes out the people who have shaped his life and shades the background with peripheral citizens of Pomona. As Verna fades into the background, Bernice begins to reconnect with her son. She clearly feels guilt (as does the filmmaker himself) over both Stevie and his crime. Brenda, an amazingly grounded individual, has her own issues with Bernice. As James follows a subplot of Brenda fighting to conceive, she and her loving husband Doug provide generous tough love to her half-brother. Tonya continually surprises by her astute analysis of situations as she devoutly stands by her man, even when a trip to Chicago devolves into destructive behavior by Stevie and strong criticism from Tonya's friend.

James and his coeditor William Haugse carefully shape this portrait, balancing humor (Stevie catching, and losing, fish bait) with harsher realities (Stevie's stubborn inability to take sound legal advice). Initial impressions of bad teeth, tattoos and trailer home tackiness are quickly gotten past as the filmmakers submerge their audience into this compelling story. Where "Stevie" is lacking is in establishing the relationship of James and Stevie circa 1985. We only learn that James's expectation of Big Brotherhood as spending time kicking a ball around were confounded and that Stevie's birthdays were routinely celebrated with pizza parties. What did James's withdrawal mean to Stevie's development? Would his continued presence have made a difference?

Still, one must admire James for rolling with the punches. When documentarians find their subjects veering off their expected course, some adapt to changing paradigms with powerful results ("Paradise Lost"), where others seem to freeze up in confusion ("Startup.com"). James wasn't expecting to be breakfasting with Stevie's family before his sentencing, yet captures a surreal moment where we're unsure if Verna is addressing Stevie or their dog. Possibly looking for a personal catharsis, James gets a whole lot of heartbreak, yet still presents an unblinking portrait of a complex personality.

Helmer James has created an interesting hybrid of a documentary film as he not only chronicles his subject, he participates in his former Little Brother. This is not something I usually appreciate in a documentary film - the filmmaker should not intrude on his subject. But, with "Stevie," James is in the thick of the action and it is a moving, deeply felt analysis of himself and, especially, the focus point of his work, Stevie Fielding. When he first took on the Big Brother role with 11-year old Stevie, he thought it would be going to ball games and playing catch and having fun. But, Stevie was a troubled young boy from a dysfunctional family and had an abused past. He never knew who his real father was and his mother, Bernice, and stepfather abandoned him to the care of his step grandmother Verna when he was just a toddler.

Stevie was always in one kind of trouble or another and, even when Steve James first came along, the boy's dysfunctionality was already firmly set. Steve always had pangs of guilt over abandoning the boy when he was needed most and, in the beginning of his return years later, sets out to banish his demons. When James first arrives at Stevie's door he is shocked by the redneck, hateful, threatening nature that spawned from that boy he knew long ago. He doesn't return to Pomona for two years until after Stevie is arrested for predatory molestation of his eight-year old niece. The bulk of "Stevie" deals with James's interaction with the young man, his fiancée Tonya, Verna, Stevie's estranged mother Bernice, his half-sister and brother-in-law, Brenda and Doug Hickham, his first foster parents and his Aryan Brotherhood friends.

"Stevie" is an intelligently crafted work with its camera-as-roving-eye work by cinematographer Dana Kupper making the viewer an over-the-filmmaker's-shoulder observer of the doings of the very strange title character. Stevie marches to his own drummer and, when James and his camera return again, he is in the throes of criminal legal proceedings. This is where the film concentrates its attention as James lets us get to know his subject and develop empathy for this troubled soul who seems far older than his 24-years. James does this with a wealth of interview material of those around Stevie. The camera also follows the title character through his daily existence as he must deal his past actions, consult with his public defender, find Christ and prepare for his inevitable incarceration for his crime.

The diversity of the camera's followings helps to justify "Stevie's" near 2.5 hour run time. Besides the day-to-day life of Stevie, there are several sidebars that make this work a bit of Americana a la Grant Wood for the dysfunctional. His sister Brenda, who grew up in a considerably more normal household than her half-brother had, is happily married, cares for her brother and dearly wants to have a baby of her own. James follows Brenda through her considerable efforts to get pregnant, birth the baby and cope with the harrowing troubles of bringing a child into the world.

There is the also the story of Stevie's reconciliation with his mother after their many years of estrangement. Bernice reportedly beat Stevie black and blue as a child and abandoned him to Verna's care. Stevie is quoted, more than once, that he would like to kill his mother, but you soon learn that he doesn't mean what he says as his mouth moves faster than his mind. Another interlude that is memorable involves Stevie's first foster parents, a couple who cared for their ward but, unfortunately, did not make the difference for the boy that they might have, if given more time with him. Fishing expeditions with his friends reveals their link to the Aryan Brotherhood as Stevie is advised to seek their help when he goes to prison. There is much more to "Stevie" as we watch the train wreck his life has become.

I hope "Stevie" has a long-term life from theater to video to PBS outlets and art-TV channels. It deserves it and should be watched by any aspiring documentary filmmakers as a standard of excellence.