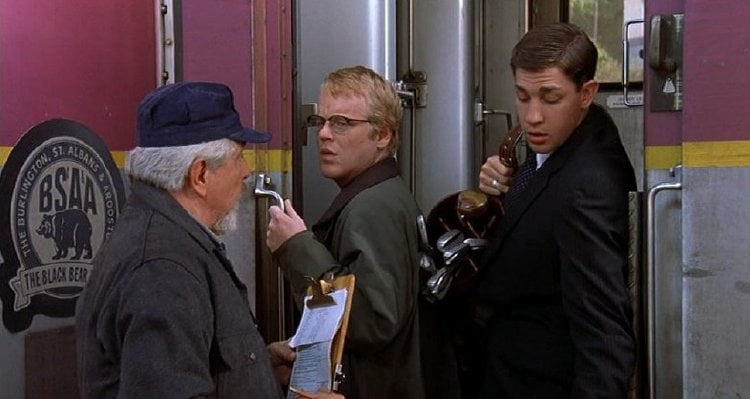 Hollywood invades small town New England when a film production company, led by producer Walt Price (William H. Macy), comes to Waterford, Vermont to shoot the film, "The Old Mill." The problem is the town's old mill burned to the ground three decades ago and that's just the beginning of the troubles in a movie about making a movie, David Mamet's "State and Main."

After getting unceremoniously thrown out of the state of New Hampshire, the Hollywood cast and crew of "The Old Mill" descend upon Waterford, Vermont, largely on the merits of its authentic old mill and firehouse. Screenwriter Joseph Turner White (Philip Seymour Hoffman) will face a crisis of conscience when he's asked to lie about witnessing the presence of an underage local in star Bob Barrenger's (Alec Baldwin) car at an accident at "State and Main."

Writer/director David Mamet takes a pot shot at Hollywood corruption with his latest, "State and Main." While his screenplay features many pithy lines (usually coming from the director/producer due of William H. Macy and David Paymer), "State and Main" plays pretty flat.

Director Walt Price (Mamet vet Macy) arrives with his signature cross stitched pillow ('Shoot first, ask questions later') and sets up camp. His and producer Marty Rossen's attitude is obviously condescending to the locals, who themselves are soon retaliating by filling Evian bottles with tap water. Soon they discover that the local, hoped for titular, old mill burned down years ago, their ever randy star is fooling around with the local deli guy's underage daughter (Julia Stiles, "Hamlet"), their female star, Claire Wellesley (Sarah Jessica Parker) is balking at nudity even though it's covered by her contract and the locals are all tied up in a local stage production and unavailable as extras.

The central focus of the story, though, is Mamet standin, screenwriter Joseph Turner White (Philip Seymour Hoffman), adapting his own play for the big screen for the first time. He meets local bookshop owner Ann Black (Rebecca Pidgeon, "The Winslow Boy" and Mamet's wife) who tries to keep him on a true course as he navigates the ways of Tinseltown while an innocent romance blooms.

Even as Mamet provides clever dialogue ('Everybody makes their own fun. If you don't make it, it's entertainment.' 'You believed that? It's so biased! So's our electoral process, but we still vote.') and situations (placing a computer product placement in a film set in 1895), his film never takes wing and flies. His oddly assembled cast runs the gamut from Macy, delivering his lines as if he were on stage instead of in a film, Seymour Hoffman, miscast as a naive romantic lead, and Alec Baldwin, convincing as a pampered star with a fixation on nubile young girls. Macy and Paymer enjoy repartee, but Hoffman and Pidgeon never really connect. A subplot where Mayor George Bailey (Charles Durning as the "It's a Wonderful Life" namesake) cowtows to the Hollywood celebrities in order to score a society dinner for his wife Sherry (Patti LuPone), so rife with comic possiblities, is just about abandoned. No effort is made to make the film-within-a-film appear the least bit interesting.

Technically the film is adequate. Overall, "State and Main" has the appearance of a film that was a lot more fun to make than it is to sit through.

Playwright/screenwriter/director Mamet has created celebrated and controversial tales from "Glengarry Glen Ross" to "Oleana" to "The Winslow Boy." Mamet, the writer, has produced an eclectic body of work that often delves deeply into the human psyche. With "State and Main," the helmer takes on a fast paced comedy in a movie about making a movie in small town America. In this one, though, the talented Mamet stumbles.

When the production team for "The Old Mill" lays siege to the unsuspecting Vermont town, it is with a checkered past. A scandal forced the entire production crew to be turned out of their previous location in a New Hampshire town because of a propensity for young girls by the film's star, Bob Barringer (Alec Baldwin). Now, ensconced in their new location, with only days to go before principal photography starts and no budget left, Walt Price has multiple disasters to contend with. As mentioned before, the mill that is the focal point of "The Old Mill" is gone. Barringer's co-star, Claire Wellesley (Sarah Jessica Parker), refuses to do her contracted nude scene unless she gets a bunch more money. The film's lunatic cinematographer wants to destroy a stained glass landmark so he can "get the shot." Finally, playwright turned screenwriter Joseph Turner White (Philip Seymour Hoffman) is suffering from a monumental case of writer's block.

And these are just some of the problems that must be faced. White falls for the pretty fiance of a local politician while struggling with his changing career. Bob Barringer gets in trouble, again, with a local teen girl (Julia Stiles), forcing a cover-up to avoid getting everyone tossed out of town. And, a replacement still has to be found for the damned Old Mill!

All of this is fun stuff from the pen of a talented writer and it probably looked really good on paper. Especially with the large, talented ensemble cast available to breathe life into their characters. Unfortunately, the execution of these amusing ideas falls flat with too much going on with too many characters. There is also a problem with who is the "bad guy" here. Is it the intrusive strangers from Hollywood? Or, is it the town folk who do everything they can to take advantage of the bucks that the production crew brings to thew town? As the lines of definition blur between the outsiders and the residents, the people of Waterford take on the same greedy air as the folks from Tinseltown.

The lack of distinction between the outsiders and insiders is complicated by the choice of some of the principle actors. Philip Seymour Hoffman has impressed me, considerably, in his past performances - see him as Freddie in "The Talented Mr. Ripley" as a marvelous example of his acting ability. But, as the sensitive, angst-ridden, romantic figure? It is just not the Hoffman's cup of tea. Mamet seems to be using the actor as his own alter ego in the film. Sarah Jessica Parker, as the movie star to whom modesty has just become an issue in her career, is little more than a pampered prima donna that usually gets her way. Alec Baldwin simply has nowhere to take his self-center matinee idol.

There are some good roles coming out of "State and Main," though. William H. Macy, one of the finest character actors in the business, plays the cocky producer to perfection. He, and David Paymer as the film's high-powered "money man," put a good spin on portraying filmmakers used to having their way on location. They plead, threaten and pout to get their ways with their crew and the town's people. Their perfs only make up a portion of the movie and it's not enough.

Tech credits are adequate, but nothing remarkable.

I have come to look forward to most of David Mamet's films and, usually, am not disappointed. There are exceptions, though, and "State and Main" is one. For a movie about making a movie, there isn't enough movie-making stuff to the story.