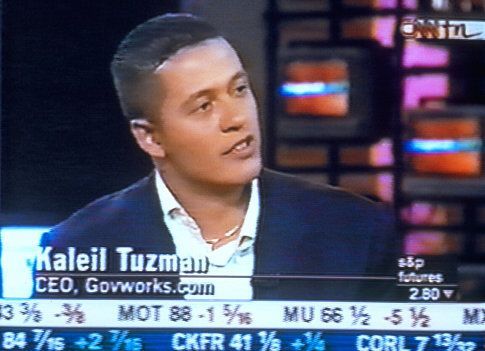 Just after Jehane Noujaim quit her MTV job to take up filmmaking, her roommate Kaleil Tuzman left a job with Goldman Sachs to team up with friends in founding a dot.com. Documentarian Chris Hegedus ("The War Room") met Jehane while looking for a project on the Internet and the two teamed up to co-direct the rise of govWorks.com from ground zero. They didn't get what they had expected, but they did capture drama aplenty in "Startup.com."

As much the story of the rise and fall of a dot.com as of the unraveling of a lifelong friendship, "Startup.com" focuses on govWorks cofounders Kaleil Tuzman and Tom Herman. Friends since childhood, Kaleil is the darkly exotic, charismatic money man who convinced multiple venture capitalists to invest millions of dollars in govWorks.com while Tom is the all American kid who
stayed in the background guiding development. Kaleil's ruthless, workaholic drive contrasts so sharply with Tom's laid back, trusting nature we know we're in for major conflicts. The cracks begin to show early on, when Tom's enthusiasm for the technology during an investment meeting causes Kaleil to accuse him of being unfocused. On the flip side, Tom makes design decisions without waiting for Kaleil to return from one of his countless business trips.

The film is frequently, often unintentionally, funny. Reporting from an early meeting in the Silicon Valley, Kaleil sputters on about how their proposal was criticized for being presented in hardcopy rather than computerized presentation, for their lack of IT experience, lack of startup experience and for being 2-3 years behind the curve. 'He just doesn't get it!' Kaleil remarks on the obviously prescient investor. Later on, when their company's grown to over 50 employees, they're all trooped
out to Tom's parents' Camp Interloken retreat for a mandatory morale weekend. Tom hikes them into the woods where he tells them he likes to meditate - the wind whistling through the pine needles is particularly inspirational he tells the awe-struck group as the video camera records
utter silence. Occasionally, we're treated to Kaleil's girlfriend Dorita complaining about his refusal to understand that just one phone call from him can 'keep her going' for up to three weeks (another relationship hitting the skids).

Kaleil 'I refuse, reFUSE, REFUSE to lose!' Tuzman's chutzpah knows no bounds, as he invites competitors to visit their office (Atlanta's ezgov.com eventually beats them at their own game) or slips President Clinton his business card right in front of CNN's cameras. On the eve of their launch, though, govWorks' search engine is declared a dud and the company never regains its
footing. Tom gets philosophical and is sacked by Kaleil, who can't believe Tom no longer trusts him when Tom begins to protect his own self interests.

"Startup.com" is conventionally filmed on video by a filmmaking team with exceptional access to their subjects. While they've captured the story of a generation who surfed the Internet wave with dreams of untold wealth, when their own subject was one of the ones who wiped out, Jehane and Hegedus seem to reel with them. The documentary has a long and dramatic build, marking time with the build up in govWork's employee base, yet suddenly, it all drops off. Tom's ejection is given weight, but the gradual disintegration of govWorks is not. The abrupt feel of the film's wrap up
is also a causality of the filmmakers' decision to concentrate on Kaleil and Tom without so much as naming almost any other employee.

Only two or three years ago, a few smart guys with a little bit of capital could parlay an idea into a multimillion-dollar Internet business and have their fortunes made. Docu filmmakers Chris Hegedus and Jehane Noujaim rolled their camera at the birth of just such a company and planned to follow the meteoric rise of its founders, until the bottom fell out of the market in 2000, in "Startup.com."

In 1998, four young entrepreneurs - Kaleil Isaza Tuzman, Thomas Herman, Chieh Cheung and George Fatheree - founded PublicDataSystems, Inc., a firm whose goal was to build a government Internet portal that would ease the public's pain in dealing with the bureaucracy we have all come to know and loathe. Longtime documentary filmmaker Hegedus and newcomer Noujaim followed
their group of web entrepreneurs from the very beginning, at the first discussion of the idea of their business to hiring the first folks into the company to their almost arrival at the top. The plan was to show the rags to riches success of their govWorks.com website and the making of 20-something multimillionaires.

But, in true documentary style, things do not go off as planned and a variety of circumstances happen that signal the end of the ambitious plans for the company. Venture capital dollars are a fickle thing and can dry up without a moment's notice. The company offices are broken into and valuable documents, outlining business and strategies, are stolen. The volatile personalities and differing viewpoints of the founders creates conflict and threatens the future of the govWorks.com. Then, in 2000, the bottom fell out of the Internet marketplace. The rags-to-riches tale becomes the rise and fall of an American dream.

"Startup.com" is a sometimes-interesting document that suffers from a major problem - none of the individuals being followed are likable and, with their arrogance, bickering and techno automaton behavior, create no empathy from the viewer. The makers do a decent job of capturing all aspects of the making of a startup company but they, unfortunately for the viewer, picked
the wrong subjects. There is an attempt to introduce humanity into the mix by showing Thomas taking care of his young daughter and Kaleil having girlfriend troubles, but these are mere distractions and only serve to make an overly long film even longer. Perhaps some judicious editing would help, but the subjects, themselves, are the real problem.

"Startup.com" documents the rise and fall of four guys' dreams, but, in the end, I don't care, and that's not good for a documentary movie.