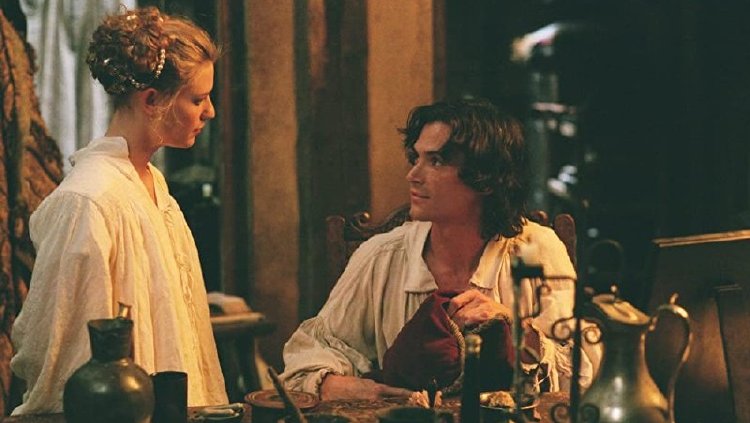 In 1660's England, the most beautiful woman on the English stage was a man, Ned Kynaston (Billy Crudup, "Big Fish"), a true superstar of his age in a time when it was illegal for women to tread the boards. His dresser Maria (Claire Danes, "Terminator 3: Rise of the Machines") adores him and emulates him by secretly playing his most famous part, Desdemona, at a local pub, but Ned does not find imitation the sincerest form of flattery when confronted with a new "Stage Beauty."

This film is already being compared to "Shakespeare in Love," but this is a far weightier examination of gender as role playing and the art of acting. This is more like "Farewell My Concubine" stripped of political hardships under the morally lax regime of Charles II (Rupert Everett, voice of "Shrek 2's" handsome prince). Billy Crudup gives a powerhouse performance as the man trained to repress any sign of masculinity, becoming a magnet for both sexes.

Self-absorbed flirt Kynaston values his dresser as both a confidante and assistant ('I couldn't shed my skin without you.'), but is oblivious to her feelings as a woman. She's outraged when he returns from obliging the curiosity of two female fans, Lady Meresvale (Fenella Woolgar, "Bright Young Things," "Vera Drake") and Miss Frayne (Alice Eve), by letting them 'feel his thingie.' Her heart is broken when she spies him making love on the abandoned stage with arts patron George Villiars, the Duke of Buckingham (Ben Chaplin, "Birthday Girl").

Maria is thrust into sudden fame though, when the King hears of her stunt from his showbiz-inclined mistress Nell Gwynn (Zoë Tapper). Kynaston is appalled - 'A woman playing a woman - what's the trick in that?' he asks, but suddenly his fame is upstaged by the novelty of actresses and Ned finds that he cannot transition into male roles. Kynaston slides into tawdry entertainments, clinging to his female impersonations, but Maria is determined to save him. Maria, a star who cannot act, teaches Ned how to be a man while he, in turn, introduces her to the method.

Director Richard Eyre ("Iris") has made a film that is not only thoroughly entertaining on several levels, but also is an intelligent exploration of how acting pertains to sexual role playing. After his professional downfall, the sexually confused Ned is dismayed to learn that Buckingham (a snobbishly astute Chaplin) fantasized that he was making love to the heroines Ned played on stage rather than to the actor himself. Later, in an erotically charged scene, Maria enquires of Ned how men make love and Ned demonstrates multiple positions with her, informing that even when there are two men, one is a woman. 'Who am I now?' Maria asks throughout as her eyes blaze with inquisitive excitement.

Danes is brilliant foil to Crudup as they exchanges places in the spotlight. This is perhaps her best screen performance to date. Support couldn't be better beginning with the comical Everett as a King whose rule is guided by the desire to please his mistress and newcomer Tapper confidently sparkles as the low-born manipulator of the throne. Tom Wilkinson ("Eternal Sunshine of the Spotless Mind") grounds literal 'behind the scenes' scenes as owner of Kynaston's company. Richard Griffiths, the Harry Potter series' Uncle Vernon, is all powdered pampered bluster as a nobleman of Charles' court who turns his embarrassment at Kynaston's dainty hands into revenge.

"Stage Beauty" is equally randy and romantic, bawdy and witty. Period details cover both the common and regal in scenes that move between dirty streets and richly appointed halls. Eyre and screenwriter Jeffrey Hatcher have transitioned Hatcher's stage play to the screen without losing its theatrical heart. Crudup and Danes give it its romantic one.

The actor doesn’t own a part, the part owns the actor.” So says Edward ‘Ned’ Kynaston (Billy Crudup) who, in 1660’s England, is the toast of the town and the best of the best in theater. His specialty? He plays the female leads in the biggest plays of the day. The Puritan law prohibits women on the stage and Ned has made a tidy career taking their place. But, the Restoration is under way and King Charles II back in power after 20 years in exile. The king is bored with the sameness of theater and decides he wants change – change that will dramatically effect Ned in "Stage Beauty.”

We are first treated, in “Stage Beauty,” to a performance of Shakespeare’s “Othello” where Desdemona is skillfully and femininely played by Ned. After the play, he is acclaimed by all and sought by a pair of comely ladies that want to take Ned on the town – dressed in woman’s finery. He goes along with the game and, when approached by lecherous Sir Charles Sedley (Richard Griffiths), he playfully antagonizes the man, who mistakes Ned for a woman, and makes an enemy in the process.

Times are changing in England with the return of the monarchy in the guise of King Charles II (Rupert Everett). His saucy mistress, Nell Gwyn (Zoe Tapper), aspires to act on stage and convinces her lord that the laws need to be changed – women should play woman’s roles and men should be banned from doing so. Ned, who has striven to eliminate all aspects of masculinity from his persona, is suddenly out of work. With the King’s decree, Ned’s life is ruined.

Meanwhile, Maria (Claire Danes), Ned’s dresser, has been studying the actor and has made some underground performances in local taverns, garnering acclaim, and becomes the first woman to do what Ned had previously dominated – portraying women on stage. Maria’s career rises meteorically in a few short weeks while Ned descends into a life of desperate depravity, unable to find legitimate work. But, while Ned wears his feminine roles like a glove, Maria is struggling to master the reigns of acting. She may be the first and famous because of it, but that does not make her good. Ned and Maria realize that they need each other.

Helmer Richard Eyre, who directed 2001’s “Iris,” belies his minimal big screen experience by crafting a film that rivals the other Shakespearian era film, Shakespeare in Love,” and, in my mind, bests it. (I was less than please with the Academy’s selection for best film that year but that’s another story.) Eyre combines his fine cast with exemplary techs to bring us to the London stage at that pivotal artistic time in England’s history.

The actors that make up the characters in “Stage Beauty” are ably led by stars Billy Crudup and Claire Danes. Crudup, who was notable in “Almost Famous” and exceptional in “Jesus’s Son,” commands the role of Ned Kynaston. He envelops himself in the character giving Ned feminine, though not female, movement, a subtle but important difference as an actor playing women. The handsome thespian’s performance reverberates on the screen in all of his various guises – from female impersonator to impresario. Crudup convincingly conveys the sometimes-justifiable arrogance about Ned’s acting skills and other times the despair because of those same skills. Beneath that good-looking, likable exterior beats the heart of a commanding actor. And, his English accent ain’t bad, either.

Claire Danes, too, holds her own with the mainly British cast and plays well opposite Crudup. As Maria/Mrs. Margaret Hughes, she’s a woman leading an intriguing life as she watches and becomes enamored with the stage as Ned’s dresser while breaking the taboo against women in theater. Sir Charles (Griffiths), remembering the humiliation he suffered at the hand of Ned earlier on, uses Mrs. Hughes as the means of getting revenge. With the ear of the king and the support of his mistress, Nell, Sir Charles sets out to ruin Kynaston for good.

The supporting cast is a true embarrassment of British acting riches with the likes of Everett putting a marvelously droll spin on his King Charlie. Newcomer Zoe Tapper, as the king’s bawdy, bouncy mistress injects playfulness into her Nell Gwynn. Tom Wilkinson, as theater company owner Betterton, Ben Chaplin as Ned’s lover and benefactor, George Villiars, the Duke of Buckingham, Edward Fox as the king’s exasperated chief advisor, Sir Charles Hyde, and Hugh Bonneville as philosopher/writer Samuel Pepys all give fully rounded performances and substance to their characters.

Richard Eyre belies his television roots with a skill that makes watching movies like “Stage Beauty” a real pleasure for a film buff. Working with a script by Jeffrey Hatcher, from his play, Eyre recreates the theatrical world where the end of Cromwell’s Puritan rule and the start of the royal Restoration parallel the end of the only-men-playing-woman era to its opposite, only-women-play-women. The story has a nice symmetry about it that makes it feel authentic in heart and soul.

Technically, ”Stage Beauty” is as good a from-stage-to-screen conversion that I have seen in quite some time. Much of the action does take place in the confines of dressing rooms and tiny theaters, but cinematographer Andrew Dunn never lets it get claustrophobic or stagey. The active camera work and soft lighting also give the film warmth. Production designer Jim Clay and art directors Keith Slote and Jan Spoczynski don’t try to recreated Shakespearian theater but, instead, create a period theater environment that plays Shakespeare. Tim Hatley’s costume design, too, exemplifies the overall excellence of the film.

Well-crafted, expertly written, impeccably acted and deftly directed, “Stage Beauty” is the kind of film that deserves popular attention and attendance. It’s intelligence is palpable and acting some of the year’s best in a story that shows the end of unique period in theater history.