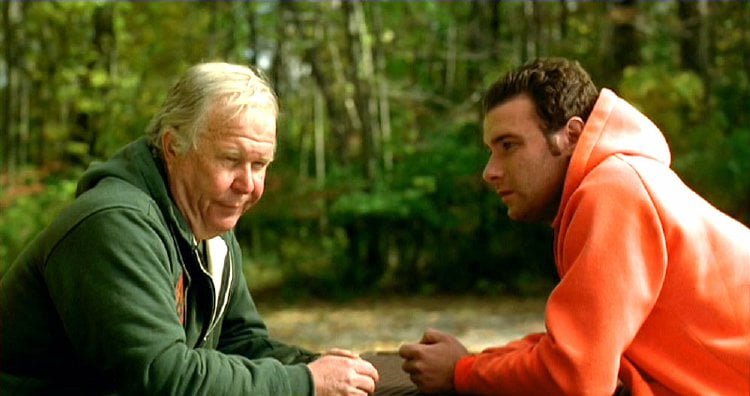 Paul (Live Schreiber) is a young ex-con making a fresh start with the Parks and Recreation department in a small New England town. He is teamed with Murphy (Ned Beatty), an old hand at the job and approaching retirement. The duo gets to know each other and become close friend over a year's time in writer/director Tom Gilroy's feature film debut, "Spring Forward."

When ex-con Paul (Liev Schrieber, "A Walk on the Moon") begins work as a municipal parks worker, he's full of self doubt. He's partnered with the much older Murphy (Ned Beatty, "Cookie's Fortune"), a most unconventional blue collar worker. Over the course of a year and the change of the seasons, a deep and moving friendship will form between the two men in writer/director Tom Gilroy's feature film debut "Spring Forward."

Paul and Murphy begin to bond when the uppity son of a gardening supply store (Campbell Scott, "Big Night," perfectly capturing the unctuous manner of a man born to wealth unused to being challenged) tries to manipulate them into shoveling the manure his father's donated to the city. Paul, emboldened by Murph's refusal to back down to Frederickson, calls Frederickson a vicious
name and is rebuked by Murph for his language. Frederickson claims Murphy's reaction is because the term could be applied to Murphy's son, a gay man.  Paul is devastated that he's caused Murphy hurt.

"Spring Forward" progresses through six additional, real time scenes each punctuated by a seasonal interlude in the author's home town of Ridgefield, Connecticut. Paul and Murph discuss religion and get high. Murph takes Paul to a house where there are puppies for sale by a woman who might need companionship as much as Paul does ('Frasier's' Peri Gilpin).  Murph tells Paul about the hurt caused by a lifelong neighbor who refused to stand up for his son, then the two meet that same neighbor (Bill Raymond) at Murph's son's wake. The two find a hysterical woman and her terrified daughter by the side of the road.

"Spring Forward" is above all an actors' showcase, particularly for Beatty and Schreiber who are simply sublime together. Beatty's Murph looks like a blue collar everyman on the verge of retirement, but has an unexpectedly sensitive soul and Beatty never once makes us doubt this unconventional package. Schreiber's Paul has more beneath the surface than one would expect, having substituted voracious reading for institutional education.  He too, seems like a potential redneck who's instead opened his mind beyond where his background should have led him. Their verbal sparring and generational gap give the film a gentle humor.

Gilroy has provided these character riffs in his writing. Murph has a habit of making bakery allegories rather than use foul language ('I'd have been frosted too,' 'He's got a cupcake mentality'). Paul expounds on Asian spiritual concepts, and, just when he thinks he's flown over Murph's
head, Murph sums up his ideas with a simple cliche - the concept of karma is translated into 'What goes around, comes around.'

Gilroy's playwright background is stamped all over his film debut to its detriment, however. Gilroy's decision to film over the course of a year was a plus for the actors, allowing them to form their bond gradually.  Yet, every moment is jam packed with a philosophical or heavy moment, never giving his characters a chance to breath or his film to form more naturally.

Newcomer Gilroy shows his stage-bound roots in his first attempt at making a movie. The stagy nature of the film's structure - seven episodes, chronologically over the course of a year, bridged by idyllic sequence of small town life in the Northeast - could have been painful to watch in the
small budget film. Except for a pair of big-budget performances by Beatty and Schreiber.

The trite little story of the once fallen and now found Paul, whose criminal past stemmed from financial desperation and not a mean streak, coming into the life of the near-retirement Murphy. As each talky episode unfolds, we learn more and more about the two, who they are, what their
desires and needs are (Paul, early on, declares his "need" to get laid), and just what makes 'em tick. There's talk about being a better person as Paul floats his newly learned ideas of karma and religion before Murphy.  Murph tells his young colleague about his gay son, Bobby, who, off camera, is dying of an undisclosed disease. (You figure it out.) They even smoke a joint together in a cross-generational bonding ceremony. There is philosophy enough for three plays here.

You can overlook the amateur filmmaking of "Spring Forward" as you watch the two fine performances by the leads. Ned Beatty has had a long career portraying a variety of characters from his "squeal like a pig" victim in "Deliverance" to Otis, the sidekick of Lex Luthor (Gene Hackman) in "Superman," and Sheriff Lester Banks in "Cookie's Fortune." He gives Murphy
the depth you expect from the actor and portrays the man as truly good and kind in a small-town way. Live Schreiber is also proving himself to be able to play a variety of types and he makes Paul a real person. He has a past, but it does not dictate how he will be in the future. His deference to and
respect for Murphy are genuine as the older man's kindness helps to temper Paul's youthful exuberance and sometimes-foul mouth.

Gilroy brings other characters into the mix, but they seem superfluous in what is mainly a two-person play, a la "My Dinner With Andre." Campbell Scott, Ian Hart, Peri Gilpin and others are each brought, briefly, into some of the episodes to flesh out the background. Their appearances,
mostly, take the attention away from the leads without moving the story much ahead. Each appearance is so brief that none of the actors are given a chance to put substance into their stick figure roles.

Techs are all right, especially the soft, nicely lighted lensing by Terry Stacey which captures the look and feel of small town USA. Although the bucolic bridging sequences of folks mowing lawns, stringing Christmas lights and burning leaves kept bringing to mind the TV spots for Country-time Lemonade.

"Spring Forward" won't be high on any best lists come year's end, but the two performances by Beatty and Schreiber make this worthwhile fare - at least on the small screen.