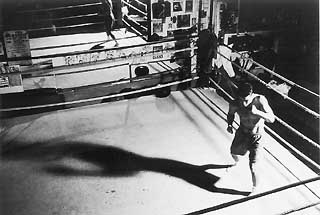 Gabriel Jesus Sandoval Chavez was as an American kid as you can get. He got by okay at school, showed talent as an amateur boxer and worked at McDonald's. When he decided to go along with his new gang friends on an armed robbery, he didn't know that it would end in a 3½-year prison stint. Since his release in 1994, he started a new life and went professional as a fighter, but his struggles weren't over in Marcy Garriott's first documentary feature, "Split Decision."

Winner of the Best Documentary at San Antonio's CineFestival and Best of the Festival at the Chicago Latino Film Festival, Austin based Marcy Garriott's first documentary feature, "Split Decision," is a thought provoking look at overcoming adversity in the pursuit of the American Dream.

Gabriel Jesus Sandoval Chavez was born in Chihuahua, but grew up in a tough Chicago neighborhood from the age of 10. Early on he showed promise as a boxer, competing in his first fight after only two months of training. But he ended up hanging with the wrong crowd and at the age of seventeen was along for the ride when a friend robbed a local store. This cost him a 3 1/2 year prison sentence.

But Gabriel became a poster boy for rehabilitation and moved to Austin on his release from prison in order to start a new life. Two years later he was the North American Boxing Federation super-featherweight champ. But a retroactive INS law cracking down on immigrant criminals forces Gabriel's deportation back to Mexico, even though his parents, brother and sister are all now U.S. citizens.

In Mexico Gabriel is considered a gringo with a funny accent but soon he's established himself as a boxer to reckon with as he continues to hope for reentry into the U.S. and a shot at the world championship.

"Split Decision" uses a fairly standard documentary format comprised of controlled interviews (with Gabriel's family, Mexican grandparents, trainers, promoters and an INS official), musical montages, news footage and Gabriel in his various environs. Shot on digital video and transferred to 35 mm, the film looks sharp, with vivid colors and artful compositions (unlike, say, the
muddy looking "Startup.com"). Garriott has assembled Gabriel's story with economy (the run time is 75 min.), yet captures multiples themes (the support of family, being caught between two countries, the old ways - how to cook a goat! - contrasted with the new, the irony of a truly rehabilitated man being denied the chance to prove himself) as she follows an explosive boxing career.

"Split Decision" would make a great double bill with 1999's "On the Ropes," where we saw Tyrene Manson's quest for a golden gloves title short-circuited by an unjust prison term. While Jesus Chavez actually committed the crime he was accused of, Garriott captures a true role model in her vibrant portrait
of a the young boxer.

Documentary films have been making some inroads into the mainstream of American movies these days, what with such docs as "Sound and Fury," "Keep the River On Your Right: A Modern Cannibal Tale," and "The Girl Next Door." It's a real pleasure to see a newcomer to the documentary film field come along and show a solid understanding of this underrated craft.

Docu-maker Garriott takes an interesting subject - Mexican boxer Jesus Chavez - and builds a story based on the young man's legal plight of deportation while he slowly, steadily assembles a career for himself as a professional pugilist. The documentary style is simple and straightforward - talking head interview footage combined with views of Jesus's day-to-day life and his family, cutaway scenes of his different neighborhoods and, finally, a look at his many boxing matches. Garriott is a woman who takes her craft seriously and has paid close attention to the construction of her work.

There are other aspects that make this 75-minute tome a tight, interesting work. There is a lot of information conveyed about Jesus's life and his battle with the Immigration and Naturalization service that make this more than just a rags-to-riches story. While Jesus may be American to his core, his family came to Chicago, illegally from Mexico, when he was a small boy. Because of his criminal record and a 1996 Federal law that mandates that convicted illegal immigrants will be deported for their crime -regardless whether they are rehabilitated or not - he is deported to Mexico, where he is a stranger in a strange land. Jesus, his managers and, as his prominence in the ring built up, his big-time promoters, spent years trying to reverse the government's unbending position. It's a bout that Jesus is still fighting.

Other aspects of Jesus's story are told by use of title cards to convey important supplementary information to the viewer in a succinct and simple way that progress the film nicely. Music that fits the various locales is also a plus.

I know there are a lot of boxing fans out there and it's nice to be able to promote (pun intended) a movie about a young fighter on his way up the ladder. That "Split Decision" is a straightforward, unadorned documentary about an honest, hard-working young man trying to make it - successfully here - in one of the world's toughest, most violent sports is a major plus for these fans, and others, too.