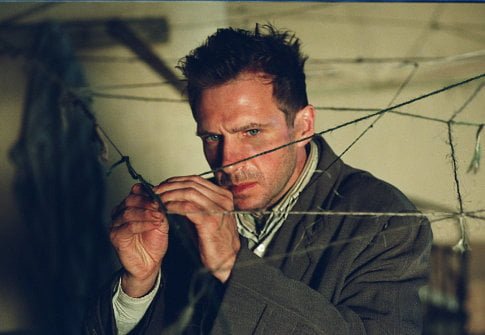 A troubled man in scruffy clothes disembarks a train in London and makes his way to an anonymous row house across the street from a belching gasworks. Mrs. Wilkinson (Lynn Redgrave, "Gods and Monsters") admits Dennis Cleg (Ralph Fiennes, "Maid in Manhattan") into her drab but clean halfway house. There Dennis' exposure to his childhood neighborhood will kick his schizophrenia into high gear and he begins to relive the trauma that landed him in an asylum when he was a young boy (Bradley Hall) his mummy (Miranda Richardson, "The Hours") called "Spider."

Directing from Patrick McGrath's adaptation of his own novel, David Cronenberg delivers a meticulous exploration of schizophrenia which is utterly lacking in emotional or dramatic payoff. A tantalizing triptych from Miranda Richardson, playing Spider's mother as well as his delusional hallucinations and a convincing portrayal of the isolation of mental illness by Fiennes cannot energize a story that moves slowly toward an inevitable and unsurprising conclusion.

Spider shrinks from Mrs. Wilkinson's stern ministrations and listens with admiring befuddlement to fellow outpatient Terrence's (John Neville, "The Adventures of Baron Munchausen") odd but apt adages ('The more the clothes, the less the man,' Terrance observes when Mrs. W. discovers Spider wearing multiple shirts). As he scuttles about the streets of the East End, Spider recognizes the places of his youth and begins to observe (along with the audience) the life of a shy young boy habitually sent by an adoring mum to drag his plumber dad (Gabriel Byrne, "End of Days") home from a pub patronized by blowsy prostitutes.

Cronenberg drenches Spider's world with portentous symbols - broken windows (to the soul?), the gasworks which hover like an alien mothership, Spider's out of control cat's cradle which grows into a web (that presumably gave Denis his nickname). Yet, Cronenberg's biological motifs are oddly absent here, the female breast the only organ on display. His 'ick' factor only appears once, as Bill Creg's paramour, the sluttish Yvonne (Richardson), declares she has something lovely for the boys' tea and plops down a bowl of slimy eels.

Andrew Sanders' ("Possession") theatrical production design is comprised of simple, dreary sets which all include windows and mirrors from which to observe Spider's past (as well as articulate the splintered quality of his mind). Spider's only relaxation comes from escaping into a pastoral picture that hangs in the dingy tea room he frequents. The institutionalized drabness of the real world is juxtaposed against the bright sterility of Spider's asylum, which we see in brief flashback.

Fiennes embodies the people one circumvents on the street, muttering barely audible/comprehensible ramblings and retrieving his belongs from a sock that hangs inside his pants' crotch. He returns from outdoors to hide in his room, crabbed over a journal at his bureau, scribbling scratches, recording who knows what. Yet due to the nature of his illness, once the actor has the patter down, he has nowhere to go with it. Richardson, on the other hand, appears in three distinctly different personas. Mummy is refined working class and protective of her boy. Yet Spider puts her face on guttersnipe Yvonne who replaces his mother in father's bed. Richardson is all bad teeth, low speech and slatternly stance as the horrific mother substitute, at one point matter-of-factly flicking jism at the camera lens. In a much smaller role, Richardson also takes on the ticks of Redgrave's performance, when Spider's inability to cope with reality makes mummy his warden. Byrne has less opportunity to build a character because the script both indicts and absolves Bill Cleg. It's hinted that he's a child abuser, yet a later scene, which plays outside the prism of Spider's psyche, paints him as a concerned, caring dad.

Although one can't help admire "Spider's" craftsmanship, it fails to emotionally engage. A far more riveting experience can be had from inside the head of a schizophrenic in Lodge Kerrigan's disorienting 1995 film "Clean, Shaven," starring Peter Greene.