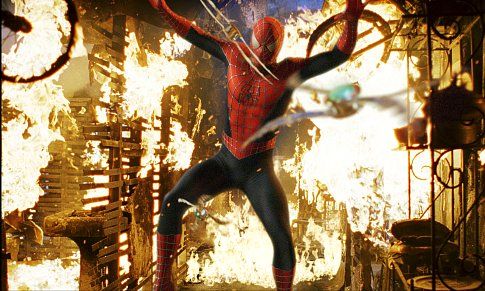 Peter Parker (Tobey Maguire, "The Cider House Rules") is the picture of the 98 pound weakling. The spectacled teen is constantly harassed at school and barely noticed by Mary Jane Watson (Kirsten Dunst, "The Cat's Meow"), his neighbor since the age of six and unrequited love. His only friend is fellow outsider Harry Osborn (James Franco, TV's "James Dean"), son of millionaire scientist Norman Osborn (Willem Dafoe, "Shadow of the Vampire"). When a class trip takes them to a spider exhibition, Norman and Peter jockey for MJ's attention, but Peter instead gets bitten by a genetically altered arachnid in director Sam Raimi's "Spider-Man."

Raimi ("The Evil Dead," "A Simple Plan") delivers a commercial comic that's head and shoulders above the bloated summer blockbusters of 2001, yet he backs away from the edge of exploring the darker aspects of his titular character. Tobey Maguire's perfect reading of Parker's adolescent angst is the most successful aspect of the film.

When Peter discovers his new powers, his first thought is to use them to attain his own ends. Having noted MJ's excitement over her boyfriend Flash's (Joe Manganiello) new car, he spots an ad that promises an amateur wrestling winner $2,000 - the exact price of a used sports car (in whose universe?). He designs a pitiful forerunner of his future Spider-Man costume and holds his own against Bone Saw McGraw (Randy Poffo), but the deceitful promoter will only give him $100, citing a technicality. Peter learns a life lesson when the promoter is robbed and he refuses to stop the robber (Michael Papajohn).

Spider-Man begins acting only for the common good, although his motivations are questioned by the Daily Bugle's publisher, J. Jonah Jameson (J.K. Simmons, hilarious and dead on). When Norman Osborn experiments on himself in order to keep a Government contract, he morphs into Spidey's first villain, the Green Goblin, and puts MJ in harm's way for Peter's displays of heroism. Meanwhile, the villain's son has scooped his best friend's girl.

David Koepp's ("Panic Room") screenplay builds up the parallels between adolescence and the spider transformation. Parker builds muscles, grows hairs and ejects a milky substance that becomes his webbing. The alternate parallels between the transformation of Peter to Spider-Man and Norman to the Green Goblin are less successfully accomplished, and frankly, a bit hokey. The Green Goblin's initial appearance plays like a cross between the Wicked Witch's blitz on the Emerald City and the Penguin's carnival atmosphere destruction of Gotham City in "Batman Returns." The film's final sequences return some much-needed weight, with Harry set up as the sequel's next vengeful villain and Peter denying his own desires ('With great power comes great responsibility.').

Maguire is simply terrific as the conflicted young man, ping-ponging between the joy and wonder of his newfound abilities and the devastation of spurned love and lost family. A red-headed Dunst is an able love interest. Franco plays Harry like he never left that James Dean biopic, but his mopiness is offset by 'dad' Dafoe's exuberant haminess. Rosemary Harris and Cliff Robertson are perfectly cast as Aunt May and Uncle Ben. Bruce Campbell ("The Evil Dead") makes an amusing cameo as the wrestling announcer.

While the actor's are fun to watch, the special effects are often disappointing. Crumbling balconies and buildings look like sets and Spider-Man's bouncing leaps are clearly unnatural. The film's transitional midsection is awkwardly handled, with snippets of Osborn's story edited in (Arthur Coburn, Bob Murawski) to remind us he's there. Danny Elfmann's score plagiarizes his own for "Edward Scissorhands" when it isn't being stock superhero standard.

While "Spider-Man" effectively lays the groundwork for a new series, we can hope the filmmakers smooth out the rough edges the second time around.

For the one or two hermits out there, I'll give a brief description: 98-pound weakling high school student Peter Parker is bitten, while on a school field trip, by a genetically altered spider. The next morning he awakens to find his bod is totally buff and he has the power of an arachnid with super human speed, agility and the ability to shoot webs from his wrists. But, as his beloved Uncle Ben (Cliff Robertson) would tell him, "with great power comes great responsibility" and Peter learns this the hard way in director Sam Raimi's super slick "Spider-Man."

I, for one, had a rip roarin' good time from beginning to end. Helmer Raimi deftly moves his talented actors across the screen with precision and energy. The casting could not be more perfect from top to bottom. Tobey Maguire is Peter Parker. The young actor utilizes his low-key manner to terrific effect as he struggles with his newfound power and learns that his destiny is to fight crime and uphold justice. Kirsten Dunst is girl-next-door pretty and sexy and, in one scene in particular, provides the reason for 14 to 24-year old males out there to go see "Spider-Man." Robertson and Rosemary Harris are dead on as Peter's surrogate parents, Uncle Ben and Aunt May. Willem Dafoe is the ham in a ham sandwich as the Dr. Jekyll and Mr. Hyde like character, brilliant millionaire Norman Osborne who, to save his company, takes an untested human enhancer drug. His turn into the big, bad meanie, the Green Goblin, gives the actor ample opportunity to go over the top and have some fun. Spectacular, in a small but important role, is J.K. Simmons as the publisher and martinet of the town's biggest newspaper (The Daily Bugle), J. Jonah Jamieson. The actor captures the character exactly as I remember him from the days when I read Stan Lee comics.

Techs are very good but not great. There is a noticeable shift from live action to computer-generated F/X. The effects have a slight artificiality, but this is small criticism and I got over it pretty quick. David Koepp's screenplay, with some minor literary license changes, evokes the feel and spirit of Lee's original work. The humor is there and evident and the action is comic book fun.

The high point of "Spider-Man" is the first hour or so as the story of how Spider-Man came to be is presented, including Peter's stint as a pro wrestler. There is a lot of charm and humor in the first half that is supplanted by the requisite good guy versus bad guy yarn as Spidey takes on the Green Goblin. At least two sequels are assured.

It doesn't matter what I or any other critic say about "Spider-Man." From the opening box-office take I suspect you've probably seen it already, anyway