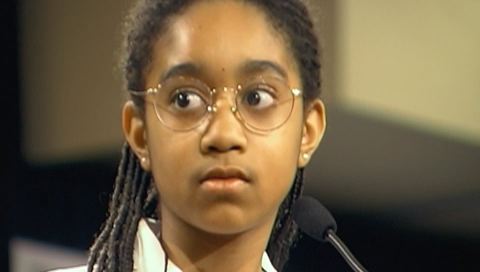 Nine million schoolchildren are given the opportunity to compete in spelling bees, but only two hundred forty-nine make it through their local and regional competitions to the National Spelling Bee in Washington D.C. In 1999, Cinematographer/Director Jeffrey Blitz followed five girls and three boys from Texas, Florida, Mississippi, Connecticut, the District, California, Pennsylvania and New Jersey who are all "Spellbound."

Blitz recognized the emerging popularity of the National Spelling Bee, which draws a large ESPN audience, and came up with a winning documentary subject. While not all of his eight choices are equally engaging, he has picked kids from all walks of life who approach the bee with different motivational factors and aspirations. "Spellbound" is at its best building suspense when the kids are stymied by surprising words (one little girl (see picture above) practically recoils in horror when offered 'chateaubriand') and Blitz has a knack for capturing their entertaining facial expressions.

Blitz also did his homework coming up with his coastal candidates, as the eventual winner is among them, although she is one of the blander subjects. Harry Altman, a geeky motor mouth who admits he could be called talkative, was surely chosen for his entertainment value. Harry's face is made of silly putty and his conversation with himself as he wrestles with 'banns,' a Catholic word the Jewish boy has clearly never been exposed to, is a riot. (Harry's mother Fay equates her son's conundrum to a boy from Texas confounded by 'yenta.') These idiosyncrasies also help to point out that the Bee doesn't necessarily produce the best speller, but the luckiest among a talented group. Neil Kadakia, a boy whose Indian grandfather has hired one thousand chanters to ensure his victory, is almost undone by 'darjeeling,' an irony that seems to be lost on his Indian-born dad who is simply too intent on his boy's winning. Angela Arenivar, the Texas daughter of a Mexican cattleman who speaks no English, can spell eight syllable words but is flummoxed by 'wheedle.'

Emily Stagg is competitive and wants to win the Bee because she is not the best horse rider in her riding group or singer in her choir. Her British dad comments on the sheer Americana of the Bee, a competition that would be of no interest in Europe. This could be due to the sheer perversity of the English language itself - one of the four questions that contestants are allowed is 'What is the language of origin?' Ashley White is a shy black contestant from a District housing project whose single mother decries the lack of publicity and recognition her daughter receives compared to other contestants (Blitz shows a number of congratulatory signs cheering on home town entrants, one amusingly misspelled). What drives Angela besides her mother's pride is almost a mystery as the girl is clearly terrified by the experience.

Ted Brigham's simply the smartest kid in Rolla, MS and he relishes the idea of being around other kids more like himself even if his best subject is math. Nupur Lala from Tampa has her own Greek chorus of three neighborhood boys she was driven to beat. My favorite contestant, April DeGideo, wears glasses and a perpetually serious expression, even when describing her oblivious parents as Archie and Edith Bunker. The DeGideo family dog almost steals the entire movie.

Blitz and his editor, Yana Gorskaya, have fashioned their story very conventionally, however. One by one we're given a geographical location and short piece on each of these kids, their parents and teachers, like the filler bios that run during the Olympic games. Gorskaya gooses the action up a little with some machine-gun paced moments of disqualifications, but the film does suffer from occasional draggy pacing. An attempt to fill in some of the Bee's history by interviewing its first winner from 1925 and representatives of the past three decades seems half-hearted and doesn't add anything of interest. Still "Spellbound" is blessed by its subject matter. It's a crowd-pleaser.

Each and every year, across the U.S., 9,000,000 kids compete for the 249 slots available at the National Spelling Bee held every year in Washington, DC. Documentary maker Jeff Blitz follows eight middle-schoolers on this road as they traverse the pitfalls and dangers of spelling competitions in quest of fame and $10,000 in "Spellbound."

Helmer Blitz does a by-the-numbers job in his Rocky-esque documentary as he follows his eight subjects, intellectual athletes from all walks of life whose only goal is to be America's best speller. It is a diligent work depicting the equally diligent efforts of about-12-year olds who are called upon to spell, under the pressure of the nation's gaze, the likes of apocope, hellebore, repititeur and zwieback.

In straightforward fashion Blitz introduces the principles in this saga of spelling perfection. Angela is the daughter of a Mexican cattleman who, after 25 years living in Texas, does not speak English. His daughter, despite this, has formed her own training regimen and is a savant at spelling. Nupur, from Tampa FLA of Indian parents, is a return contestant with another chance at spelling fame. Emily, from affluent New Haven CT, has a diverse set of interests from riding to singing to spelling. Ted is a genius loner in small town Rolla MO for whom the national bee is a chance to mingle with other kids like him.

Ashley is from inner city DC whose study technique is to read the entire dictionary from cover to cover. Neil, harking from Indian parents living in San Clemente CA, is imbued with the American work ethic of "work hard and you will succeed." April, from working-class Ambler PA, likes roller coasters and coffee and studies 8-9 hours a day - during summer vacation! Harry, a motor mouthed, likable geek from Glen Rock NJ, is the most theatrical of all the contestants.

After the intros of all the contestants, their methods, earlier victories, and interviews with family members, teachers and friends, the action shifts to the drama of the National Spelling Bee. 249 kids enter the arena where Alex Cameron, the seminal announcer for the NSB, provides the words to be spelled as well as the answers to the contestants' four important questions: Can you repeat the word? Can I have a definition? Could I have a language of origin? Can you use it in a sentence?

The kids are an animate collection of characters and are an interesting lot of kids. Expressive Harry Altman steals the show whenever he is given a chance to mug for his audience and the camera. The facial gymnastics that he, of Jewish origins, goes through as he tries to figure out the spelling of a simple, but solely Catholic, word are some of the film's best moments.

"Spellbound" is unembellished, textbook documentary filmmaking that chronicles the lives of eight typical kids vying for honors in the NSB and who happen to know how to spell "logorrhea." (Which means, FYI, "excessive and often incoherent talkativeness or wordiness," according to Webster.)