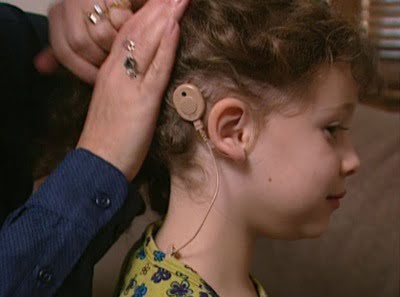 Heather Artinian is a precocious little six-year old who has decided that she wants to change her world from one of being deaf to hearing. The reason for her decision is a controversial medical device, the cochlear implant, which would help Heather to hear. With Heather's desire as a springboard, the fine documentary, "Sound and Fury," explores the struggle for identity of a deaf family in the hearing world. It also attacks the controversial issue of turning our children into robots dependent on the kindness of those who can hear, forsaking their soundless roots.

Cochlear implants are bionic devices which feed sound waves to the brain's auditory nerve. When surgically implanted in young deaf children, the results can be amazing - a child deaf since birth can be speaking completely normally within a couple of years. Sound like a no-brainer of a medical solution? Director Josh Aronson's "Sound and Fury" documents the incredibly complex arguments both for and against the device by following just one family on Long Island, New York.

First we meet Peter Artinian, the deaf father of three deaf children. He states 'I'm happy being deaf. It's very peaceful.' Upon the birth of each of his children he was happy to find they were 'just like me' and his wife (their mother) Nina.

His hearing sister Mary and her husband are horrified to find that her family's deafness has been inheritted by their son and are told about cochlear implants. They witness a five year old girl hearing and speaking like a non-handicapped child two and a half years after receiving a cochlear implant and are convinced that this is the way to go. Peter is not only incensed, he's very 'vocal' about it. Then his eldest, Heather, expresses interest in becoming a hearing child as well. Family battle lines are drawn for three generations.

While the advantages may be obvious, the surprise is that there are compelling arguments made against the procedure, not the least of which is the invasiveness of the surgery and device itself (it must be implanted within the skull and is connected to the ear via a rather large plastic piece plugged in behind the ear). The nature of deaf culture is explored as is the relationship between deaf/hearing parents and their deaf/hearing children. The deaf adults even have some good comebacks when pressed on the educational advantages of hearing.

The filmmakers use some ingenuity to showcase the argument. We witness the silence of deaf communication and then see a signed conversation that is dubbed rather than subtitled to illustrate the difference between the two worlds. 'Talking head' interviews begin with Peter Artinian and are intercut with various family members in various groupings out in the real world - gradually, more 'talking head' one-on-ones are added as the arguments and their offshoots begin to take shape. Irony is allowed to speak for itself, such as when Heather says 'I don't want to sign, I want to speak' - in sign. Peter and Mary's deaf father makes some rather arresting observations. Things get really interesting when Peter's wife Nina, begins to sway to the pro-implant side, even considering the procedure for herself.

"Sound and Fury" is a provocative documentary that is sure to make its audience consider things about deafness and handicaps in general that it might not otherwise.

When one first hears of the subject matter of "Sound and Fury," a cure for deafness in children through surgery and implant, it sounds like a no-brainer. Of course, if a child is born deaf, the best thing, the right thing, to do is to correct that deficiency. The cochlear implant is installed inside the child's skull and is attached to an external connector that, in turn, connects to a Walkman-like device that the child must carry in order to hear. When implanted at a very young age, the device successfully allows the child to hear and, thus, speak. The problem is, as a child gets older in the deaf world, they become assimilated into it, making the value of the implant to decrease, proportionately, with age.

Heather's two brothers and her parents, Peter and Nita, are all deaf. Peter is a near-militant leader of the anti-implant deaf community on Long Island and is stunned by his daughter's desire to enter the hearing world. Nita is initially encouraging, but, when she finds out that implant would not work for her - an adult mind would find it nearly impossible to assimilate the cacophony of sounds that would invade their silent world - she joins Peter in his adamancy against the process. They also fear that their silent world, which revolves around American Sign Language, will grow increasingly isolated as their children are given the chance to leave the realm of the deaf.

So you say to yourself, "Wow, they're right to want to preserve a culture of necessity and keep their children close." Then, docu filmmaker Josh Aronson and his team shift gears. Peter's sister, Mary, and her husband are blessed with the birth of twins, but one of the babies is deaf. The hearing couple learn of the success of the cochlear implant and immediately see the device as a savior for their child. The whole controversy over the implant is focused on the Artinians and their nuclear family, both deaf and hearing.

Peter's adamant anti-implant stance is argued just as strongly against by his mother, who had to learn to adapt to the life of a deaf child and had first hand experience of the pain and the prejudice a deaf person must face in the hearing world. Peter wishes to preserve a world where he can freely communicate with his family. He also sees that the independent and adaptive world of the deaf is going to close in upon him and him and his family. Peter is, I think, justly afraid of being left alone, deaf, in a hearing world.

I find it amazing that a subject that, on the surface, is so cut-and-dried, turns out to be one of the most intelligent and thought-provoking documentaries I have ever seen. It presents both sides of the controversy in a fair, even-handed manner that gives ample food for thought. Each side's case is well represented in this familial microcosm of a process that can, indeed, change the world of the deaf. Unfortunately, the implant will leave those untreatable in a constantly contracting world that will garner less and less understanding or sympathy from the hearing world as time goes forth. Peter argues, too, that the process is extremely invasive and anything but minor, but this argument has to be discounted. As medical technology progresses, other, less invasive, devices will be developed, making Peter's a moot point. The real issue is the isolation and loss of a culture that has lived and survived among us hearing folk for thousands of years.

"Sound and Fury" does exactly what a documentary is supposed to do - open your eyes to another world unfamiliar to you. It does that and makes you do an awful lot of thinking, too.