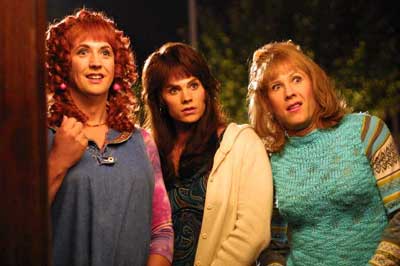 There will never be another "Animal House," so why do filmmakers keep spinning flimsy riffs on it? First time screenwriters Joe Jarvis and Greg Coolidge fold in the now infamous Tom Hanks TV series "Bosom Buddies", although only his less famous co-star, Peter Scolari, appears in a cameo.

Every year, Kappa Omicron Kappa fraternity throws a KOKtail party featuring booze and campus babes on a yacht. They entertain their rich dads who bring business contacts that will set up their sons in cushy jobs for life. K.O.K stud Adam, whose one night stands face a gauntlet in the morning leaving his dorm room, keeps the KOKtail funds in a safe by his bed. But after a routine keg bash where Delta Omicron Gamma students are thrown out by a DOGcatcher and dildos are slingshot through their windows across the street, Adam discovers the money's been stolen. Good thing he secretly videotapes his conquests, because Adam, Dave and Doofer all suspect fraternity president Spencer (Brad Beyer), but he ejects the trio from the dorm before Adam can get to his tape.

"Sorority Boys" takes the expected route from here. One guy, Dave, will fall for D.O.G. president Leah (Melissa Sagemiller), who'll like him (too much) as a woman but despise him as a man. Adam must tackle the loser lothario who's taken over his former room. Doofer, the party animal of the bunch, teaches his new sisters how to let their hair down. They all gain a newfound respect for the female of the species.

The material is crashingly lame, relying on beautiful French women with excessive body hair, high heeled pratfalls and those house acronyms for too much of its humor. "Sorority Boys" stoops to near-sighted shower pairings, tampon fights, wet T-shirts and a fencing match with sexual aids. Credit must be given to Harland Williams, Michael Rosenbaum and Barry Watson, who inject far more good-natured spirit and talent into this project than it deserves.