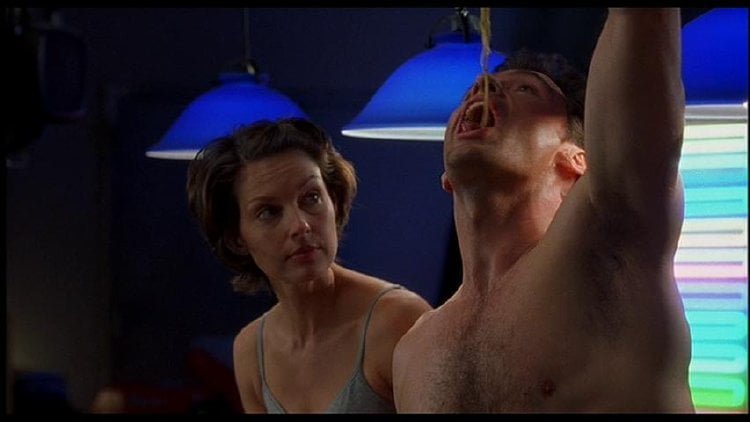 Jane Goodale (Ashley Judd) is a talent booker for a hot new daytime talk show who falls into a whirlwind romance for new executive producer Ray (Greg Kinnear). When he dumps her to return to the woman he was cheating on, Jane bitterly develops her 'new cow' theory, utilizing the womanizing ways of her new roommate Eddie (Hugh Jackman "X-Men") for research in "Someone Like You."

Trading the much better title of its book source "Animal Husbandry" for the song title "Someone Like You" sums up the unoriginality at work in this film. While the supporting cast provide some bright spots, Ashley Judd is bland and unsympathetic in her first romantic comedy.

Jane moves in with Eddie (who also works with her and Ray), the kind of bachelor who has a stylish loft right above NYC's Hogs and Heifers the bar featured in "Coyote Ugly", a source for new cows (apparently bulls will only mate with the same cow once). Of course we learn that Eddie suffered a bad breakup from a monogamous relationship, which can only mean that he's really sensitive and eventually the one for Jane.

Jane's buddy Liz (Marisa Tomei), who conveniently works for a men's magazine, convinces Jane to write up her theory, and Jane agrees, but only after creating a 65 year old PhD (shades of Dr. Ruth) as an authorial front. The article's a sensation and everyone's clambering for the author as a guest, including Jane's boss Diane Roberts (Ellen Barkin).

Hugh Jackman, resembling a lanky, young Clint Eastwood out from under his wolfen makeup, displays an easy likeable charm and warmth which elevates the material when he's on screen. Marisa Tomei is sharply creating a career as the funny, witty best friend ('remember, time wounds all heels'). Kinnear goes from eager puppy to whipped puppy as the subject of Jane's love/disdain. Barkin is fabulously slinkily as Diane Roberts, always on the prowl for the elusive interview. Except for one scene where she allows herself to get silly showing Eddie her old cheerleading moves, Judd is simply stale.

The oh-so-trite material (adapted from Laura Zigman's novel by Elizabeth Chandler, "The Little Princess") goes so far as to rip off the missed opportunity New Year's Eve party pairing of "When Harry Met Sally." Director Tony Goldwyn ("A Walk on the Moon") can't avoid cliches like title cards, schoolgirls making pronouncements directly to the camera and video montages.

"Someone Like You" is largely inoffensive. At least it has the convictions to turn its male bashing on its ear.