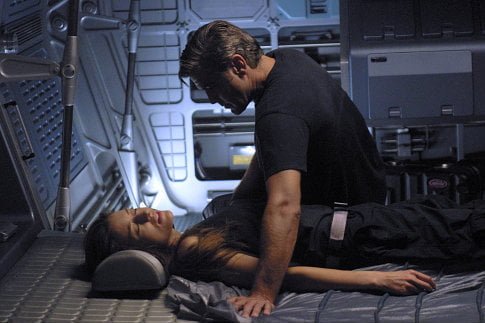 Successful and capable psychiatrist Dr. Chris Kelvin (George Clooney) receives an urgent message from his old friend, Gibarian (Urlich Tukur), aboard the deep space station, Prometheus. "Come to Solaris. You need to," says the scientist to his friend and draws Kelvin into a deadly mystery on a planet called "Solaris."

Writer/director Steven Soderbergh has traveled to new story telling lands in his adaptation of the Stanislaw Lem renowned science fiction story that was first brought to the screen (in a three hour epic) in 1972 by Russian director Andrei Tarkovsky. That tome was long and talkie and required your undivided attention to make any sense. Now, Oscar winner Soderbergh puts his own spin on the sci-fi tale and gives a very different interpretation of the subject story.

Chris Kelvin still grieves over his wife, Rheya (Natascha McElhone), lost to him many years before, but he is willing to take on the one-man investigation of the distant problem brewing aboard the Prometheus. The manned station was put into orbit around the ethereal planet, Solaris, to investigate its exploitative worth, but the crew broke contact and a security team sent to investigate was never heard from again. Armed with Gibarian's promise that he, alone, would be allowed to board, Kelvin makes the perilous journey. When he arrives he finds bloody signs of violence, the frozen body of his good friend and a strange little gnome of a guy named Snow (Jeremy Davies). He learns, through Snow, that the commander committed suicide and the only other person on board, Dr. Gordon (Viola Davis), has locked herself in her quarters.

Before Chris can make sense of what is happening on Prometheus he is awakened by the touch of Rheya, alive and beautiful beside him. He is so freaked out by this encounter, though, he acts harshly and tricks her into a space pod and ejects her from the station. The next night, Rheya gently caresses him again. Now he doesn't know if he is insane or in the presence of a monster. As the minimalist story unfolds we see Kelvin's guilt, desire, doubt and faith all brought to the fore. The performances are also minimalist and you won't see any laser swords, three-headed aliens or intergalactic space battles.

Clooney is given little to do but look anguished. The Soderbergh regular plays his role of Kelvin pretty much in distress all of the time. (Clooney fans, however, get not one but two naked butt shots of the actor.) Natascha McElhone gets two roles, actually, as the real Rheya, in flashback, and the new Rheya born of Chris's mind and memory. The actress does the most thesping as her past and present incarnations each has its own arc. Viola Davis gives an earnest performance as the doubting scientist who won't chance infecting Earth with what may be a very deadly force. Jeremy Davies gives a spastic, nervous tick kind of performance that reminds me of Dennis Hopper's loony photojournalist in "Apocalypse Now."

The look of the film is derivative of the sci-fi classic "2001: A Space Odyssey" (without HAL) and "The Shining" with its brightly metallic, otherworldly sets and long, quiet takes of the actors looking thoughtful or distressed. Where the '72 film is all talk-talk-talk, Soderbergh cuts the dialog to the minimum, using the silence to build his tension. The quiet, though, works against the film as it steeps the world of "Solaris" in ambiguity. There really isn't a payoff for the viewer as Kelvin finds inner peace. Or, does he? Too many things are left up in the air and unexplained, such as the fate of the security team.

One of the most notable things about "Solaris" is the music score by Cliff Martinez that has echoes of Mike Oldfield's "Tubular Bells" (better known as the music for "The Exorcist") and the capable film scoring of Tangerine Dream.

This tale of the battle between predestination and free choice may hold some appeal to more mature audiences but will be hard pressed to get the younger, laser-sword-loving sci-fi fans to the theaters.