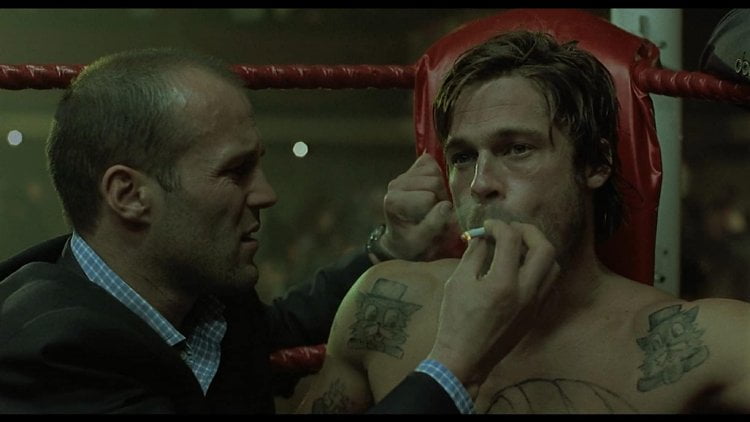 The heist of a flawless, 84 carat diamond, fixed bare knuckle fights, Irish gypsies and a dog are just some of the goings on in director Guy Ritchies's sophomore feature, "Snatch."

Ritchie's kinetic first film was a smash in his homeland, but only a cult success in the U.S. With "Snatch" he follows much the same formula but brings in recognizable stars, most notably Brad Pitt as Mickey, an almost incomprehensible Irish bare knuckle fighter who loves his mum (Sorcha Cusack).

The pace is fast and furious, featuring editing montages (Jon Harris and Les Healey) comprised of stills (Frankie's pleasure exploits) and near-stills (Cousin Avi's trip to London shown in two seconds flat) that are hilariously economical. Ritchie even gets a "Run Lola Run" moment when he shows a fateful dual car crash from opposite perspectives back to back. Urgent cinematography by Tim Maurice-Jones ("Lock, Stock and Two Smoking Barrels") humorously captures the action, and, occasionally, sublime moments, like when Mickey apparently floats horizontally through the air after a vicious ring punch.

Ritchie's assembled a terrific ensemble here, from unknowns like Ford, who's magnificently malicious and wickedly witty, to big stars like Pitt, who shines here in a humorous offshoot of his "Fight Club" persona. Ritchie's script may follow a formula, but his lines are deliciously inventive. (My favorite - when Brick Top asks 'In the quiet words of the Virgin Mary, come again?'). Baby faced Tommy continues to wonder at the irony that has him and Turkish buying an ever more splendid and expensive caravan for Mickey when they originally went to him to purchase a used one. Kudos, too, to the unnamed Pikey pit bull whose loyalty brings luck.

Be warned - for all its humor, the film features extreme violence and some gore, but simply put, "Snatch" is a blast.

"Lock, Stock and Two Smoking Barrels" intro'd helmer/scripter Ritchie with a hyper-kinetic, in your face underworld comedy that grabbed the viewer's attention from beginning to end. His protagonists were innocents set adrift in a see of sharks to swim or be eaten alive. With "Snatch," the director doesn't remake his first work, but he does delve more deeply into the criminal underbelly of London, mining a rich collection of characters in the process.

>From the very beginning, "Snatch" tosses you into the action with the theft of the fabulous diamond, the desire of New York gangster Avi (Dennis Farina). En route from Antwerp, diamond thief and courier Frankie Four Fingers (Benicio Del Toro) stops in London to make a separate deal with Avi's partner and cousin, Doug "The Head" (Mike Reid). Frankie's addiction to gambling tempts him into making a bet on an illegal boxing match for Boris "The Blade" (Rade Sherbedgia), a ruthless Russian mobster. The bet turns out to be a setup for a robbery by a trio of bumbling incompetents - Vinnie (Robbie Gee), Sol (Lennie James) and portly Tyrone (Ade)- that goes miserably awry.

Meanwhile, a couple of young toughs, Turkish (Jason Stratham) and Tommy (Stephen Graham), are trying to break in to the boxing game with the help of local villain Brick Top (Alan Ford), who also owns a pig farm. When their first fighter is put out of action, with one punch, by a wild Irish gypsy named Mickey O'Neil, they figure to put the loose canon in as the contender in a fixed fight. Mickey proves less than reliable and goes against Turkish and Tommy's deal. Brick Top, impressed by Mickey's performance, decides to gives them another chance - after calmly explaining that it takes 16 pigs about eight minutes to completely devour a corpse.

When Avi doesn't get his precious rock, he jumps on a plane for London and hires a local legend, "Bullet Tooth" Tony (Vinnie Jones), to find Frankie and the diamond. Things spiral out of control as all these forces head on a collision course of double-cross and double-deals - and a dog that ate a squeaky toy.

Guy Ritchie (Mr. Madonna to some) is an extraordinarily talented auteur who has a wonderful knack for pulling together his unique collection of cast and crew and feeding them funny and gritty dialog that spews out of the characters' mouths like machine gun fire. The helmer marshals his large ensemble actors in a frantically paced caper comedy that makes you laugh and feel queasy at the same time, the above description by Brick Top being just one example.

The assemblage of actors and non-actors in rough-and-tumble settings gives "Snatch" an earthy feel in its depiction of London's criminal underworld. The cast of characters is too large to credit here, but two of the performances - first among equals, you might say - are worth noting. Alan Ford is brilliant as the ruthless, evil Brick Top. When he refuses sugar in his tea because "I'm sweet enough," it makes you shiver, even as you laugh. His is one of the best gangster characters I've seen in years.

The other outstanding perf is given by none other than Brad Pitt, the name actor the movie's popularity may hang upon, at least initially. Pitt, as Mickey O'Neil, is hard drinking, hard fighting, highly unreliable and nearly incomprehensible with a unique Irish brogue and dialect of the pikers, the Irish travelers of Europe. This gypsy brigand would steal the fillings from your teeth, especially if it would benefit his beloved mum (Sorcha Cusack). When Brick Top threaten the safety of Mickey's family, he makes an enemy that cannot be stopped. Pitt puts a credible spin on his character and does some incredible physical stuff, too, as a bare-knuckle boxer.

The production team behind the camera includes Ritchie alumni, producer Matthew Vaughn and lenser Tim Maurice-Jones, and other talented technical artist that bring the hyperactive imagination of the author to visual life. There is a patent feel to the look of "Snatch" and "Lock, Stock and Two Smoking Barrels" that reeks of "signature" for Ritchie, but I'm not sure how this will translate in his future works. There is so much talent in the filmmaker that I would like to see him branch out in other directions. Nonetheless, "Snatch" is terrific sophomore effort, a darn good action comedy and a hoot to boot.