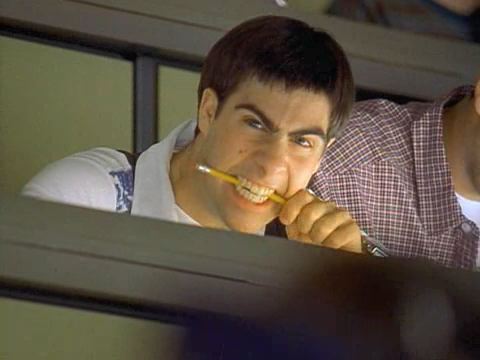 Dave (Devon Sawa), Jeff (Michael C. Maronna) and Sam (Jason Segel) are three roommates at Holden University that have proudly lied, cheated and scammed their way through their entire college careers. Now, just weeks away from graduation, their shady dealings are uncovered by an ambitious nerd who calls himself Cool Ethan (Jason Schwartzman) and threatens to blow the whistle on trio unless they use their wiles to hook him up with a brainy babe named Angela (James King) in "Slackers."

With a sorry title that's not only misrepresentative but will continually get be confused with Richard Linklater's 1991 feature, "Slackers" may draw interest due to the first appearance of Jason Schwartzman since his stunning "Rushmore" debut. Unfortunately, although he still exhibits considerable talent, Schwartzman's intensely creepy character is more likely to elicit ill will than entertainment.

Director Dewey Nicks, whose major claim to fame is the Ameritrade television commercial campaign (as is star Maronna's), starts off his film promisingly enough. Working with a script by David H. Steinberg ("American Pie 2"), Nicks introduces his three protagonists executing the beginning of their latest elaborate plan. As Dave videotapes jogging college women into and out of the path of a truck delivering blue books, Jeff does the steal and Sam, this endeavor's beneficiary, gets his test postponement by staging a bicycle accident with said truck. A cute little fantasy ditty about the trio's friendship features a corny song and some outrageous tableaux.

After Dave tangles with Ethan, the real sickness settles in. Angela's roomie Reanna (Laura Prepon, TV's "That 70's Show") is upset that she's just 2 points from the skank rating in a magazine quiz, which she proves by masturbating while strange men are in her room. After coaching from Dave's team, Ethan tries to get close to Angela by joining her nursing home volunteers where he gets to give the topless Mrs. Van Graaf (busty 50's bombshell Mamie Van Doren), a self professed whore, a sponge bath ('Nice hands' she purrs, 'Nice rack' he replies). Ethan rants about loving and hating Angela while wearing her underwear on his head before a shrine which includes a voodoo doll made of her hair. A random cutaway to Jeff, who protests too much about being gay, shows his talent for duetting to 'We'll Be Comin' Round the Mountain' with a sock puppet erected on his manhood.

The plot and characters are at the mercy of the next gross-out joke and the film spirals wildly out of control after its initial twenty minutes. "Slackers" begins to make "Scary Movie" look tasteful after a while, to its detriment rather than any subversive spirit it may have been going for. In a small role as Angela's stepmom and a throwaway fantasy cameo, Leigh Taylor Young and Cameron Diaz make one wonder if there's more to the blackmail angle than meets the eye.

Schwartzman portrays the icky Ethan as a cross between the baby-man issuings of Adam Sandler and the manic physical looniness of Jack Black. His musical background gets a goofy workout (adding to the Sandler/Black comparison), but overall, one can only question his taste in choosing this role. It's one of the most inauspicious followups in movie history, besmirching his debut by recalling Max Fisher's geeky, obnoxious stalker tendencies without any of Max Fisher's's appeal.

The film has cheesy production values, with cinematography that's alternately murky and out of focus (by Emmy and Independent Spirit nominated (!) director of photography James Bagdonas ("American Heart")).

"Slackers" should be quickly sent packing.

With years of scamming the system under their belts the triumvirate of cheaters figures, with the experience they have mustered, that giving Ethan what he wants and saving their butts should be child's play. They don't count on two facts: Ethan lacks any social grace and may be a stalker-in-training; and, Dave, himself, falls for the very pretty Angela. It becomes a battle of wills as Dave, Sam and Jeff pit their deceitful minds against the conniving, maybe crazy Ethan.

Commercial and music video director Dewey Nicks makes his feature film debut with "Slackers" and, truth be told, he should not give up his day job just yet. This tyro effort is a mishmash of styles and techniques that range from music vids and fantasy sequences to slapstick to sexually titillation and gross out - long-ago sex kitten Mamie Van Doren plays a cameo role as a hospital patient who exposes her ample breasts to Cool Ethan in the film's scariest scene. This one bit, alone, should be a good gauge to judge the film as a waste of time. A musical duet of "She'll be Comin' 'Round the Mountain When She Comes" between Jeff and his sock puppet clad penis put fear in my heart, too. At times, and frequently, the term "bottom of the barrel" came to mind. Place blame, also, on the confused and senseless script by first timer David H. Steinberg (although his second accepted screenplay of "American Pie 2" made it to the screen first.)

Acting is little more than perfunctory through most of "Slackers." Devon Sawa, as the head of the title slackers, is rather plastic in his portrayal of sneaky, yet likable, Dave. Michael C. Maronna, whom you will recognize as Stuart in the Ameritrade TV adverts, is the comic relief of the trio. Jason Segel, as Sam, is the more serious heart of the merry band and actually gives some dimension to his perf - far more than this film deserves. I'd like to see more of the newcomer. I don't know what Jason Schwartzman is supposed to be as Ethan Dulles. He is pathetic, somewhat sinister but then again not, clumsy, nuts and little more than a poorly devised plot device that has to be thwarted by our heroes. James King is very pretty as Angela but merely a desirable object of affection. I try not to think about Mamie Van Doren's appearance and fear her return to the screen.

Techs are mostly on a par with the rest of the film, which isn't saying much. This is not the kind of movie that anyone will use as a calling card for future employment. Shoot the director and scribe and leave the rest of the cast and crew in peace.

If you're the kind of person that finds politically incorrect themes of smoking cigs and pot, drinking beer, unprotected sex and guilt fantasies about Ethan having a dalliance with Dave's mom to be funny then "Slackers" is the flick for you. For everyone else, forget about it. Don't waste your money.