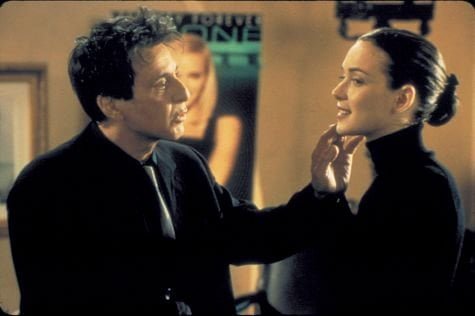 When film director Viktor Taransky (Al Pacino) finds himself removing the cherry pieces from a large bowl of Mike & Ike's for a prima Dona model-turned-movie-star (Winona Ryder) he knows that he has hit rock bottom in his professional life. Then the studio head, his ex-wife Elaine (Catherine Keener), fires him. When he meets manic, one-eyed and dying Hank Aleno (Elias Koteas), a man with a brilliant software invention - a computer-generated "human being" - Viktor sees the virtual reality package as his salvation in "Simone."

When art film director Viktor Taransky (Al Pacino) loses his demanding star Nicola Anders (Winona Ryder, "Mr. Deeds"), his ex-wife Elaine (Catherine Keener, "Lovely & Amazing"), who also happens to be head of the studio, is finally forced to fire him. On his way out the door, he's accosted by a crazed one-eyed man, Hank (Elias Koteas, "Novocaine"), who insists he has the solution to Viktor's problems ('You have something that I don't have - an eye'). Weeks later, Viktor receives Hank's inheritance - a hard drive containing "Simone."

Writer/director Andrew Niccol takes the God complex and artificiality ideas of his screenplay for "The Truman Show," a sprinkling of his genetic engineering elements from "Gattaca" and adds an examination of artistic motivation for his clever new comedy "Simone." Al Pacino chalks up his second terrific performance of the year as an outdated auteur scrambling for his place in movie history.

The film opens with the somber strains of "Requiem - In Paradisum" over a seawall vertically cutting into the horizon, the last shot of Taransky's stalled magnum opus, "Sunrise, Sunset." Cut to a studio lot where a wild-eyed Taransky is furiously removing the cherry flavored candies out of a bowl of Mike & Ikes. An imperious Nicola Anders (Winona Ryder, "Mr. Deeds") arrives, complains about the height of her trailer, and informs Viktor she's out of his film, having already issued a 'creative differences' blurb to the press.

Elaine swoops down in a golf cart to convince Viktor to compromise with the actress, and meeting resistance, fires him. Daughter Laine (Evan Rachel Wood, "Practical Magic"), pecking away at her laptop outside a soundstage, commiserates, upset that her mom and dad will be even further apart now. But Viktor meets Hank's computer-generated Simulation One and learns to manipulate it, lowering the Streep level, upping the Bacall (leaving the Borgnine), and completes his film with Anders' credit replaced with Simone (supermodel Rachel Roberts). "Sunrise, Sunset" and its 'star' become a huge hit and the director's career is assured if he can keep the press and the public from uncovering his secret.

Jan Roelfs's ("Gattaca") production design keeps Viktor defined within his landscape by horizontal lines (the break between his backyard beach and the sea, billboards, crowd control barriers, limos) except when he's placed in the narrow alleys between the studio soundstages. There, he's either dwarfed in a cavernous hell, or, when addressing the press from a pulpit-like podium, he's God-like, shot by cinematographer Edward Lachman ("Erin Brockovich") with soundstage walls rising vertically, pointing towards heaven. Niccol the filmmaker merges his collaborators' symbolic images with his words, insinuating, for example, that in Hollywood, only God speaks to the press, with Vicktor's earlier horrified reaction at Anders' having done so when she had the upper hand.

The writer/director plays with the concept of artistic vision, literally showing eyes in all manner of amusing ways (a giant poster of an eye rolls by behind Hank, Simone is erased from the computer screen with her right eye the last image to disappear). He has ironic fun with Taransky trying to finish off Simone with her 'directorial' debut, "I Am a Pig," which is a ridiculous 'art' film not too far from his own (the public love it). Reality and artifice are juxtaposed as human characters wonder about their worth while Elaine becomes jealous of a nonexistent person. Visually, the Hollywood setting is obvious for this purpose, but it's still explored with wit, such as when press cars are driven up to their owners standing in front of a painted backdrop, or when a holographic Simone sings Aretha's "A Natural Woman" to a concert crowd.

Al Pacino comically comes apart both creatively and emotionally. He's a dervish of delight or despair and a dashing ladies' man. Keener ironically softens her image as a studio head, combining self assurance with an almost wide-eyed enthusiasm for pursuing her goals. Young Evan Rachel Wood is very good as the balance between the two. Winona Ryder redeems her misjudged performance in "Mr. Deeds" with her small role here, vacillating between bitch goddess and humbled talent. Simone is coyly credited as herself. Also notable in the large cast are the tabloid press team of Pruitt Taylor Vince ("Heavy") and Jason Schwartzman ("CQ"), determined to find Simone. Taylor Vince's Max is obsessed with the beauty, rolling about in the bed and hugging the toilet bowl of a hotel room Taransky's tricked out as having been occupied by Simone. Schwartzman takes a surreal goofy route as Max's assistant Milton.

"Simone's" problems are few, but keep the film from being truly great. Niccol makes Taransky's film's look silly, like a parody of Antonioni crossed with Bergman, so it is implausible that the beautiful blonde would become such a worldwide sensation. Taransky's dependence on his ever present Jack Daniels is unevenly handled. The final act begins predictably and ends unsatisfactorily, with the hero trading dominance by a computer program for control by the two real women in his life.

"Simone" is stuffed with ideas, a wickedly comical look at Hollywood.

In 1992, Robert Altman, in his satirical Hollywood tome, "The Player," had one of the slimy movie producers come up with the idea of completely eliminating the screenwriter from the filmmaking process. Director/producer/scripter Andrew Niccol takes it one better in his Tinsel town fantasy tale, "Simone." After Victor's leading lady, Nicola Anders (Ryder), walks out on his picture because her 50-foot, luxury Airstream trailer is not the tallest on the lot, the director becomes desperate. When the now-dead Hank has a package delivered to Viktor, the helmer realizes that he has a genie in a bottle, in the guise of a computer hard drive. When he loads it onto his system he sees, for the first time anywhere, a software package called Simulation One. To Vic's astounded eyes comes the image of a beautiful woman, perfect but not too perfect. He realizes that he has a new star and the key to finish his latest film, "Sunrise Sunset."

Taransky changes the software package name to the more appealing acronym of Simone and introduces his latest "discovery" to his unsuspecting cast and, in a phone-only meeting, she wins them over immediately. He exorcises all of Nicola's scenes and cuts CGI Simone into his near-completed film and it is a hit, thanks to the great "performance" by Simone. Suddenly, he has a megastar on his hands and he plays her popularity like the conductor of a symphony. Vic has it made but when you release the genie you can't just put him back in the bottle. Like Count von Frankenstein and his monster, Viktor must struggle to keep from being destroyed by his own creation.

I marvel when I watch Al Pacino perform. In his recent flick, "Insomnia," he played a sleep-deprived homicide cop trying to solve a murder in the land of the midnight sun and he made me feel like I was awake for days on end. In "Simone" he is a Jack Daniels drinking filmmaker whose irreverent style has, over the years, put him on the outs in the Hollywood film community. When his leading lady leaves you can see the pressure build on the man, mind and body. His haggardness vanishes as his new "star" rises and is replaced by a relaxed air that all is well. The man makes you believe his character and you feel the pain and elation that Pacino weaves into the role. Also astounding is the sexagenarian actor's ability to convincing play the romantic lead with woman half his age. I am, you may have guessed, in awe of the man.

While Pacino's Viktor is the predominant figure in the film, a solid cast of supporting actors also surrounds the actor. Catherine Keener is likable as Vic's ex (wife and boss) though a little too nice to be the ruthless head of a studio. She makes believable that she still loves Viktor and that he would love her. Young Evan Rachel Wood, as Vic and Elaine's mature-for-her-years teen daughter Lainey, does a marvelous job opposite the dynamic star. Elias Koteas in a small but meaningful role is at once, very funny and very sad. Pruitt Taylor Vince, as the hard-nosed editor of a scandal tabloid, and Jason Schwartzman as his sneaky toady, are a wonderful pair that reps the media's gullibility. Jay Mohr gets to play the shallow, narcissistic leading man with a goofy edge. Supermodel Rachel Roberts does a fine job as the title character. The combination of real CGI and live action allow Roberts to put a genuine personality on Simone.

Andrew Niccol has created a fantasy tale that may not be all that fantastical anymore, what with the quantum advances being made in the CGI industry. But, his yarn isn't just about movies without actors; it is also a satire on the gullibility of the media that can be manipulated by anyone who is clever and resourceful enough.

The techs fit the near-future aspect of the film as we are presented with the images of the virtual Simone as "she" is given voice and movement by Viktor. (The "Do not pay any attention to the man behind the curtain" theme is straight out of "The Wizard of Oz" as Vic manipulates his creation to the delight of millions.) The futuristic concept is tempered, though, with such recent works as the all CGI "Final Fantasy," making the wonder of "Simone" not so wonder-full. Cinematography by Edward Lachman goes far in capturing the visual contrasts between real life and Viktor's computer invention. Production design, by Jan Roelfs, is simple yet striking, especially when we enter the cavernous sound stage where Vic uses his computer to create his ingénue. Computer graphics keep us, the viewer, privy to Taransky's magic as he uses his slight of hand to keep one step ahead of a world smitten with the beautiful Simone.

"Simone" is a fun and funky look into an artificial creation in a world that thrives on artificiality. With Pacino as its star, the bar gets raised a notch.