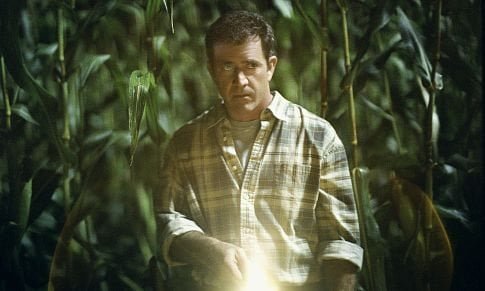 Six months ago pastor Graham Hess (Mel Gibson) suffered the loss of his wife in a tragic car accident. His faith in his God is shattered and he has forsaken the cloth, a confused and grieving man. Until, one morning, his young son, Morgan (Rory Culkin), points out a mysterious event in the now-farmer's cornfield - an enormous pattern of circles and lines made in the midst of the field of corn. Graham and local police officer Caroline Paski (Cherry Jones) believe it is a mean hoax but world events soon show the patterns are much more in M. Night Shyamalan's "Signs."

Graham Hess (Mel Gibson) is brushing his teeth one morning when a high pitched scream alerts him to the fact that his two young children, Morgan (Rory Culkin, "You Can Count On Me") and Bo (Abigail Breslin), are not in the house. The former minister, who lost his faith when his wife died in a tragic accident six months earlier, rushes outside and into his fields where he finds both his children and what will be the first of many "Signs."

Writer/director/producer M. Night Shyamalan is back to his old tricks with his newest thriller. Once again, a lonely man goes on a spiritual journey while chilling supernatural events are upending his world. Shyamalan's trademark color, pattern and technological visual signals (circles announce the presence of aliens in crops, curtain patterns and sliced zucchini; the color blue symbolizes the spirit of a dead wife and mother; crucifixes counterpoint circles; televisions report disasters and reflect evil) may be fun to look for, but they're nothing new and getting a bit obvious. It's time for the Oscar nominated wunderkind to move in a different direction.

That's not to say "Signs" has nothing to offer. Shyamalan knows how to craft an effective thriller, and this one's scare level is back to "The Sixth Sense" levels. At first, Graham and his younger brother Merrill (Joaquin Phoenix, "Gladiator") believe the enormous crop circle formation in their corn was caused by local bad boys Lionel Pritchard and the Wolfington brothers, but when they spy a tall figure on the roof of the barn that night and are unable to catch it, they begin to suspect otherwise. Officer Caroline Paski (Cherry Jones, "Erin Brockovich") tells Graham that area animals have been acting strangely, like they do when there are predators about, just before Morgan kills the family dog for attacking his little sister.

When the news begins to report crop circle formations popping up worldwide, Carolyn advises Graham to take his family into town to get their minds onto everyday things instead of worrying about what's going on in the world (shades of Rudy Giuliani). The family excursion finds each facing personal demons, though. Graham goes to pick up Morgan's asthma medicine and gets an unwanted confession. Morgan and Bo locate a book on aliens that later visualize Hell for Graham. Merrill meets an admiring army recruiter who remembers his minor league home run record but old foe Lionel butts in with his strike out record. The whole family sees Ray (Shyamalan), the man who struck and killed Colleen Hess (Patricia Kalember, TV's "thirtysomething"). The family returns home and the world's worries arrive at their door.

"Signs resembles "The Night of the Living Dead" by way of "The War of the Worlds." "E.T." and "Close Encounters of the Third Kind" are paid homage via a riderless swinging swing and mashed potatoes. The farmhouse setting and an unusual mode of destruction recall "The Wizard of Oz." Shyamalan repeatedly flashes back to Graham's memory of arriving at his wife's accident site, each time revealing more, with the final flashback neatly tied into "Sign's" dictum that there are no coincidences. He doesn't so much twist his ending this time around as provide revelatory information at film's climax that bring his themes together and restoring his hero's faith.

Culkin and Breslin are almost, but not quite, overly precocious. Culkin is a small adult, challenging his father with intelligence. Breslin is adorable, but Shyamalan wisely works her cherubic looks into his plot. Her timing and shading of line delivery belie her age. Phoenix provides most of the film's comic relief (and there's surprisingly plenty). He nicely balances his own dark doubts with outward strength and support for his family. Cherry Jones has an off kilter speech in her introductory scene, but from that point onwards she's terrific, particularly in the climatic flashback scene.

Gibson, however, brings nothing new to the table, replaying the earnest dad from "The Patriot," albeit with less violence and outward anguish. It's a spiritless performance that never involves the audience. I couldn't help but think if Shyamalan wouldn't have had a better movie if he'd stuck with former star Willis.

Director of Photography Tak Fujimoto ("The Sixth Sense") captures the director's vision with his carefully, symmetrically composed shots, which are interwoven with unobtrusive movement and plenty of overhead shots to note patterns and the characters' places within them. Literal darkness is prominent in this film and Fujimoto illuminates it at just the right level.

Production Designer Larry Fulton ("The Sixth Sense," "Unbreakable") loads the film with visual cues such as designing the Hess dining room to remind us of what's happening outside with a table that rests on a circular braided rug illuminated from above with a chandelier of hovering lights. Visual effects are kept to a minimum (the filmmakers really created their own crop circles), but are effective when used. The aliens have been designed with the standard template, yet have been given devilish claws and hooves in keeping with the religious symbolism used throughout the film.

Shyamalan is getting to be a one-note/one message auteur, continuing his string of paradise lost/ paradise regained themes from his two previous films, "The Sixth Sense" and "Unbreakable." In the beginning of "Signs" we see Graham decked out in his minister's collar looking, wistfully, at a family photo portrait. Suddenly, it's obvious that it was all a dream or, maybe, a nightmare. From the start we are presented with Graham's questioned faith in God that, itself, comes into question when the mysterious crop circles first appear. Past prophesies come into play and raise the question: Will Graham regain his faith in God? With Shyamalan's past works as an indication you can make a pretty good educated guess.

Gibson gives a subdued, reactive performance of a man who has suffered a great tragedy and his spiritual beliefs are sorely tested. I'm not sure if it is because the actor is not used to Shyamalan's directing style or that Mel is in unfamiliar, minimalist acting waters, but his is the least significant performance of the little ensemble. What immediately comes to mind is "what would Bruce Willis have done with the character, Graham?" immediately followed by, "why didn't Willis get the part?" Mel doesn't break out of the two-dimensionality he gives the troubled Hess.

Fortunately, the rest of the tiny cast bellies up to the bar and give sound perfs all around. Joachim Phoenix really fleshes out his character, Merrill, Graham's brother, a young guy who gained a reputation in minor league baseball as a long ball hitter. Too bad that he is also the all time strike out king. Merrill has come to live with his brother and family after the tragic car accident that took Graham's wife away. Phoenix provides much of the film's comic relief while being the strong protector of his family and works especially well with the kids.

Rory Culkin, as intelligent pre-teen Morgan, is more up on what's going on than the adults with the young actor standing up well opposite the more seasoned adults. Tiny Abigail Breslin is both absolutely charming and positively convincing as the diminutive Bo, Graham's youngest with a direct psychic connection to the alien invaders. Her water obsession, done to absurdist lengths, pays off in the end. Cherry Jones, as Sheriff Caroline, acts the professional but is deeply sympathetic to Graham's grieving, evoking waves of strong, compassionate caring without a lot of extra histrionics. All in all, a terrific supporting cast backing a less-than-stellar lead. Shyamalan, who makes an appearance in his films, casts himself in yet another small, though this time very significant, role.

Shyamalan has a knack for building suspense by using long, often-inconsequential camera shots of, say, a doorway, while the scene's sound is used to build an image of the action in your mind. This tension-building technique is very effectively handled, such as when the family dog is barking, outside, at "something" that is menacing the house. The minds eye creates a picture that is probably far worse than what the filmmaker could do with special F/X. The helmer keeps things pretty low-tech and puts his efforts into the actual filmmaking and not prone to fix things later, especially when compared to the rest of the young Hollywood helmers.

Techs are very good with lenser and past M. Night collaborator Tak Fujimoto doing a fine multi-layered job in conveying the suspense and ominous overtones of the story. Production designer Larry Fulton does a solid effort in giving the film its look and feeling that stems back to similar alien invader films from the 50's. The gooey latex look of the ambiguous, but menacing, alien, when he finally makes an appearance, is a big disappointment. It made me wish for something more like the creature in "The Creature from the Black Lagoon." Rick Baker - where are you when we need you?

M. Night Shyamalan is a film craftsman and know what he wants from his cast and crew and, especially, himself. His now too frequent forays into the examination of spirituality, belief and faith make me want the writer/director to try a different path, next time around. One odd thing that I kept noting, during and after the film, was the lack of guns (after all, a farmer in Pennsylvania would at least have a shotgun to get rid of them there varmints, never mind marauding evil aliens) and the limited violence (again, considering the story of marauding evil aliens). It's not a problem, but it does draw my attention away from the tale.

"Signs" is a tale of one man's spirituality lost and found that uses the alien invasion as a plot device rather than a story unto itself. I was never clear on just what kind of bad things the invaders were up to. It's all very nice but darn it I wanted more aliens!