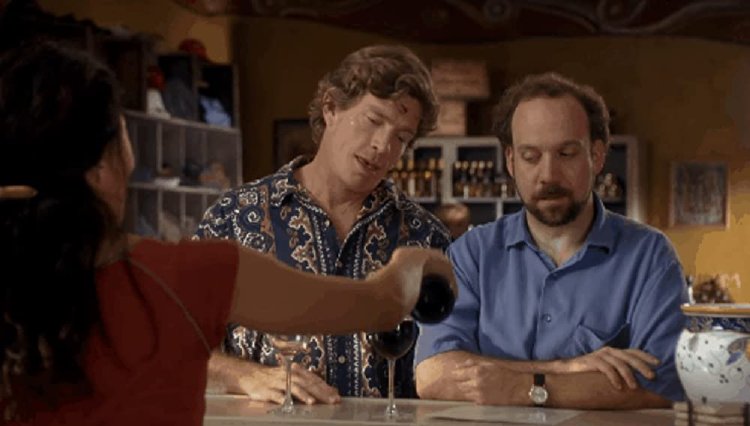 Leaving his fruitful home turf of Omaha for the first time, director Alexander Payne delivers his richest film to date. This metaphorical film equates people and life to wine, yet for all its contemplations it never lets up on the comedy. "Sideways" is one of the best films of the year from one of America's best filmmakers.

As soon as they hit the highway, Miles is at odds with Jack for opening a prized bottle of wine as a roadie chug, but Miles relaxes into the spirit of celebration. Jack's pique when Miles' stops for a birthday visit to his mom is assuaged when Phyllis flatters the ex-soap star's ego. As each others' annoyances continue, the smoothings over drop off, coming to a head over a dinner at The Hitching Post with Maya and Stephanie. The friends branch off, Jack falling into a lusty affair with Stephanie, who has no idea he's getting married at the end of the week, and Miles alternating between lonely despair and responding to Maya's gentle encouragement. Then Miles slips up with the mention of a rehearsal dinner and he and Jack are thrown back together again. Something's changed though, and both men are able to find what they need because of it.

Since his original screenplay for his first film, "Citizen Ruth," Alexander Payne has been adapting novels for the screen and nobody does it better. Working with his "About Schmidt" co-writer Jim Taylor from Rex Pickett's book, Payne follows another disillusioned man who has lost his wife, taking a personal journey on the way to someone else's wedding. Payne's under-recognized production designer Jane Ann Stewart ("About Schmidt"), art director T.K. Kirkpatrick ("About Schmidt") and costumer Wendy Chuck ("About Schmidt") present a real person's view of the terrain that Payne's cast inhabits so fully. And what a cast. Giamatti has been noteworthy since early roles in "Private Parts" and "The Negotiator," but he bests even his award-winning performance in last year's "American Splendor" with his smooth talking yet socially awkward Miles. Miles blossoms when talking about wine, and Giamatti shows the character's intense feeling for the subject paired with an innate ability with words. Giamatti and Madsen may seem like a physical mismatch, but the actors have great chemistry, bonding over a shared passion. (The scene where Miles doesn't recognize his self description describing why pinot is his favorite grape followed by Maya's comparison of wine to life is likely to be both admired as poetry and criticized as pretension. I happen to think it is an acting tour de force.) Madsen is a revelation after years of obscurity, having found in Maya a career-rejuvenating part.

An almost equally serendipitous casting choice is Thomas Hayden church as Miles' boisterous buddy Jack. His uncomprehending reactions to Miles' wine tasting discourses (a chardonnay tastes like strawberries, passion fruit, a hint of asparagus and a flutter of Edam) and total inhibitions are hilarious. He's well matched with Oh, whose insouciant sassiness belies a need to be loved. Both Hayden Church and Oh also share a knack for physical comedy.

"Sideways" is distilled from hundreds of funny little details, artfully blended into a thoroughly satisfying experience. It's wise and funny and human and a sure bet to age like a classic.

Miles (Paul Giamatti) teaches 8th grade English, aspires to be a published novelist and considers himself a wine connoisseur. His best friend from college, Jack (Thomas Haden Church), is about to tie the knot and get married and Miles takes his friend on one last fling as a bachelor. But, while Miles envisions a tour through California’s wine country to imbibe and appreciate the grape, Jack has plans to sow the last of his wild oats. Neither man suspects the changes they will undergo in Alexander Payne’s fourth feature, “Sideways.”

Alexander Payne has never failed to hit one out of the park since his feature debut with the Laura Dern-starrer, “Citizen Ruth,” the satirical story of a most unlikely icon in the battle between pro-life and pro-choice forces. His sophomore effort, “Election,” and third film, “About Schmidt,” showed that the writer/director is far more than a one-shot wonder.

Paul Giamatti has had a long, somewhat successful career as a supporting character actor. He garnered sympathy as Howard Stern’s put upon producer, Kenny Pig Vomit’ Rushton, in “Private Parts,” and stole the show as the conniving, arrogant filmmaker, Marty Wolf, in “Big Fat Liar.” The actor was catapulted to lead actor status with his memorable performance as comic book hero and author, Harvey Pekar, in 2003’s American Splendor.”

It is fortunate for us, the film-going public, that Payne and Giamatti got together for “Sideways.” This fortuitous meeting between these two talents not only hits it out of the park, they get themselves a grand slam in the process. Adapting Rex Pickett’s novel (of the same name) with his longtime writing collaborator Jim Taylor, Payne tells the simple story of two men, friends for years but with little in common, as they head off on a road trip to the wilds of California’s wine country for one last blast before Jack gets married at week’s end.

When we first meet Miles and Jack, it seems obvious what each man is. Miles has spent years writing his Great American Novel but has had less than good luck shopping it around to publishers. He is a self-pitying, divorced sad sack who sees his teacher existence as a dead end and only the fame of his writing can save him. Jack, on the other hand, seems assured at having the good life. In the past, he was the successful star of a daytime soap opera and continues to dabble in his acting career as he readies himself to enter his soon-to-be father-in-law’s business.

As the two friends head north it becomes apparent that each has his personal agenda for their week away. Miles plans to imbibe his thirst for the grape and tour the many vineyards while Jack’s only plan is to get laid as much as is humanly possible – and, get his friend a bit of feminine companionship, too. They strike up a conversation with a waitress who has served Miles many a time, Maya (Virginia Madsen), and Jack makes his friend notice her for the beautiful, vivacious woman she is.

The meet another attractive young lady, Stephanie (Sandal Oh), and the foursome have a nice dinner, with Miles drinking heavily and getting more and more morose about his life. His angst culminates when he excuses himself from the party and makes a drunken phone call to his now remarried ex. Although he has hit rock bottom at this point, Miles agrees to continue the party at Stephanie’s apartment where Jack and the hostess hit it off, if you know what I mean. Miles and Maya spend their time talking about wine and life and he begins to see that things can get better.

Payne and Taylor do a masterly job adapting their source work and provide an in-depth character study about a man with normal problems, challenges and ambitions. Paul Giamatti plays Miles as an everyman trying to cope with the foibles of life. He doesn’t know it but his planned journey with his friend, Jack, will spell a change that alter Miles’s life’s direction. The actor, a most unlikely leading man, anchors “Sideways” and gives a brilliant performance.

Thomas Haden Church has long been away from the screen but his absence doesn’t show in his character, Jack. The former soap star still tries to capitalize on his once glory with the ladies and doesn’t seem to think beyond the moment. His short sighted actions cause him great physical discomfort but, in the end, open his eyes to his life realities.

Virginia Madsen is intelligent, focused and extremely pretty as Maya and she is the catalyst that helps Miles to come to grips with his past and open his mind to a different future. Madsen delivers her performance with natural grace and her soliloquy comparing the life of the grape to the life of a person is delivered beautifully, showing the true character of wine and man. The unlikely attraction between Maya and Miles is accomplished through the fine efforts of the actors. Sandra Oh (director Payne’s real life wife) is more an object than a character as Jack’s last fling but the actress puts dimension into the role in an explosive way, as you’ll see.

Techs are outstanding on all counts. The script and direction take the often-funny moments in the film and give them nuance and much deeper meaning. Lenser Phedon Papamichael does a splendid job capturing the beauty and symmetry of the wine country. Production design and art direction by Jane Ann Stewart and T.K. Kirkpatrick & Tim Kirkpatrick, respectively, create a real, attractive backdrop for the story. The jazzy score and good use of songs are another plus. The California locations selected compliments the techs, too.

Sideways” is a simple but richly told and created story that works on all levels. Alexander Payne is, in my mind, firmly entrenched as an A-list director but with an independent mind and spirit that is refreshing. If he continues this track record he will prove to be a true filmmaking star in the new millennium. Paul Giamatti may well garner Oscar attention come years end, too. It is a true pleasure as a film lover and critic to see a film like this.