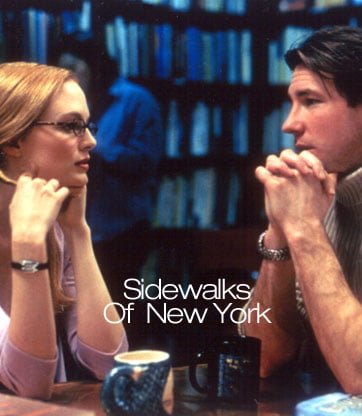 Realtor Annie's (Heather Graham) beginning to find herself disconnected in her marriage to dentist Griffin (Stanley Tucci, "Big Night") who's having an affair with a much younger waitress Ashley (Brittany Murphy, "Riding in Cars with Boys") who's being wooed by doorman/musician Ben (David Krumholtz, "Slums of Beverly Hills") who's the ex-husband of 6th grade teacher Maria (Rosario Dawson, "Josie and the Pussycats) who's started seeing TV producer Tommy (writer/director Ed Burns) who's intrigued by his realtor, Annie in "Sidewalks of New York."

Edward Burns' romantic rondelet, having been delayed by the events of September 11, now appears almost prescient in its reflections on the state of the American psyche when Heather Graham's character laments the cushy, unproblematic lifestyle that keeps everyone obsessed with sex. The film begins with each character being interviewed in various parts of New York City (the World Trade Center is prominent in Burns' own interviews) about their first sexual experience. The film will wrap up with everyone reflecting on whether it's love or sex that messes with our heads.

After the dour "No Looking Back," "Sidewalks of New York," while not totally successful, is a step in the right direction for Burns. While his clear love of the city is drawing many comparisons to Woody Allen (the film is shot handheld, edited with jump cuts and features the destructive adultery of "Husbands and Wives"), it also resembles a less caustic "Your Friends and Neighbors."

Ironically, the most realistic relationship Burns explores is the shortest - his Tommy's handfuls of encounters with Maria. The missed opportunities, hesitancies and misinterpretations of early relationships are poignantly presented. Dawson makes her inability to trust appear as careless mystery to the confused Burns. The most joyous pairing is between the delightful Krumholtz' Ben and the talented Brittany Murphy's Ashley. The only sour note is her false-feeling return to married lover Griffin and the dead end he represents.

Tucci is quite believable as a obsessed dentist who wants a wife for stability yet maintains a 'European attitude' towards lovers. He's an emotional void, lost in a sea of humanity. While his final pairing is perfect for his character, it's a stretch that this 39 year old would attract his 29 year old wife or nineteen year old lover.

Burns is supposed to be the 'good' guy contrasted against Tucci, but he mostly comes across as the average clueless male. Graham uses severe eyeglasses to project an air of seriousness, but, except for her impassioned soliloquy on the current vacuousness, doesn't bring much character to her role.

While not all the story lines are as successful as others, Burns keeps things lively enough with his rough, you-are-there style. A running gag, where passersby flip the bird to the camera from behind the interview subjects, is an affectionate comment on New York attitude.

Filmmaker/actor/screenwriter Edward Burns is building up a career centering his flicks on New York City that is either homage or rip-off of the same-themed films of Woody Allen. With "Sidewalks of New York" Burns tells a morality story of deceit, mistrust, infidelity and, finally, love as he follows the intertwining lives of his six principle characters.

Burns is Tommy Riley, a producer for a weekly entertainment program and frustrated playwright. His girlfriend has thrown him out of their apartment because she no longer loves him. Tom must find some new digs, temporarily bunking with the show's star, Carpo (Dennis Farina in the film's funniest performance), whose advice to the younger man is to go out and get laid. Instead, Tom starts looking for a place to live and meets pretty realtor Annie (Heather Graham). She is married to Griffin (Stanley Tucci) a sly weasel of a guy who is cheating on her with 19-Year old Ashley, a pretty young thing naïve enough to fall for his load of bull that he loves her. Ben (David Krumholtz), an aspiring musician and hotel doorman, does, in fact, fall in love with the teenager as he gets over his divorce to sixth-grade schoolteacher Maria (Rosario Dawson), who has had a couple of dates with Tommy that will change her life forever.

Interleaving documentary-style interviews with each of the characters as they candidly tell the innermost secrets of their lives to the camera, Burns delves into the day-to-day lives of each. Tommy needs an anchor in his life and is taken with pretty Maria, but when she fails to return his many calls, he gives up. Not so with Griffin as he blatantly lies to both his wife and his girlfriend. Annie is attracted to Tom and sees that he is really the guy for her, not her philandering husband. Ashley grows tired of Griffin's idea of commitment, which involves lunchtime meetings in a hotel room solely for sex, and wants more from a relationship. Ben, much closer to Ashley's age, sees the qualities in her that Griffin neglects to even look for and romance blooms between them.

The script, by Burns, is sometimes witty, sometimes dramatic and, when Dennis Farina is in the picture, very funny in a sleazy kind of way. It's about made up people, though, with made up problems that have their origins in the movies, not real life. Griffin is such a blatant sleazoid there is little reason why someone as sweet and loving as Annie would even be seen in the same room with the man, never mind being married to him. The same goes for Ashley who, I understand, is supposed to be naïve but it just doesn't make sense she would carry on a months long affair with someone who is so obviously thoughtless and uncaring. Burns is a more serious examiner of New York and its denizens than Woody Allen and lacks the sharp wit and humor that became a trademark of the older director/writer/star. I don't think that Burns will replace Allen as the filmmaker who loves the Big Apple the most, but he is planting his own roots there.

The ensemble cast do a yeoman's job in filling the shoes of their characters. Notable is Krumholtz as the somewhat dweeby Ben, but a guy who means it when he tells Ashley he loves her. The secondary characters are well played by the likes of Aida Turturo and Michael Leydon Campbell who has dual roles as two very different people - if you didn't know it, you wouldn't guess it's the same guy.

Burns mixes old-fashioned morality issues like being faithful and what constitutes cheating - Talking? Kissing? Oral sex? Intercourse? There is a cavalier turn about unprotected sex that seems a throwback to the 50's and feels inappropriate and, hopefully, not likely in the awareness-oriented new millennium, at least around well-educated and affluent New Yawkers.

Techs are overwhelmed by the shaky, distracting and annoying handheld camera work by Frank Prinzi, using a style very similar to the work of Carlo DePalma in Allen's "Husbands and Wives" and "Manhattan Murder Mysteries." The jerky camera work is a technique that I loathe as it brings attention to the camera and away from the actors. The film looks more amateur and less artistic because of this. Burns does do a decent job of giving us the feel of all the boroughs, not just Manhattan. He still hasn't reached the mark he made with his first film, "The Brother McMullen."