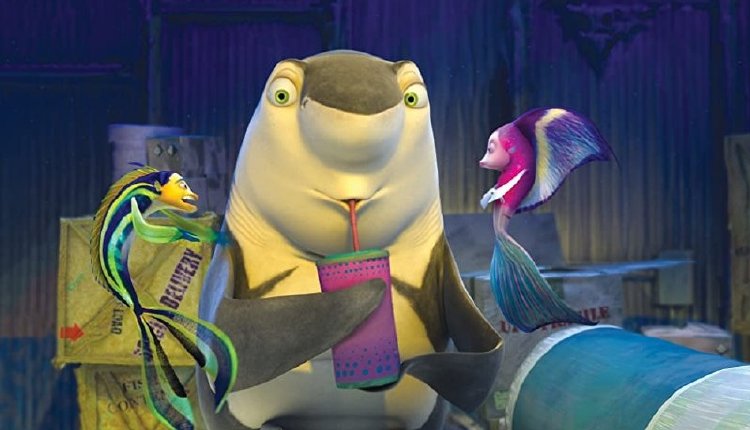 Oscar's (Will Smith, "Ali") dreams involve so much more than his job at the Whale Wash, where his 'best friend' Angie (Renee Zellweger, "Cold Mountain"), the front office girl, dreams of more than friendship. The little bright yellow fish ends up in the wrong place at the right time when he becomes the bait Great White mob son Frankie (Michael Imperioli, HBO's "The Sopranos") uses to get his brother Lennie (Jack Black, "The School of Rock") to drop his vegetarian act just before getting offed by a well timed anchor drop. Oscar uses the dead shark for his own fame and fortune as the Sharkslayer, a whopper of a fish story the media spins as a "Shark Tale."

Dreamworks animation gives "Finding Nemo" a hip hop makeover that fizzles when it should sizzle. "Shark Tale" has a couple of cute gags, but its unlikable hero and dull storyline sink it.

The film's most imaginative moment is it's very first few moments, when the Dreamworks logo boy casts a line from his crescent moon and the worm tied to his hook becomes "Shark Tale's" first talking character. The cute little buy is let free by Lenny, the misunderstood shark (who looks a little toothless after Nemo's bad boy trying to go good). Back at Reef City, Oscar owes 5,000 clams to his boss Sykes (director Martin Scorcese) for a string of money making ideas gone bad. Sykes, who is tired of forking over payola to mob boss Don Lino (Robert DeNiro), jumps at the chance to turn Oscar's shark-slaying tale into a money making legend that also keeps the sharks at bay. Oscar, who finally gets his penthouse and bling, also gets a tiresome entourage, a gold-digging femme fatale (Angelina Jolie), an inconvenient new bud in Lennie the shark and the loss of Angie's respect.

While it's great to finally get a performance from Jack Black as something other than loud and hyperactive, Will Smith does nothing to make Oscar engaging. None of the vocal talents particularly stand out with the exception of the unmistakable Peter Falk as old shark Don Feinberg. Vincent Pastore's (Big Pussy from "The Sopranos") Luca, a calamari consigliare, has some amusing lines and DeNiro does fine by the don, but the distinctive voice of Scorcese as an excitable pufferfish isn't as funny in execution as must have been in casting. Katie Couric's presence as news anchor Katie Current has achieved the goal of incessant plugging on The Today Show (Dreamworks animation is taking product placement to new levels as the Gap, among others, makes its second punny appearance in a Dreamworks toon this year.)

Screenwriter Michael J. Wilson ("Ice Age") trots out unfunny film references ("Jerry Maguire") and rehashed plot lines ("Trading Places," "Nemo") with deadening results. Wilson's world is one of those half realized fantastical places where for every one thing rejiggered for its imagined environs, like the car wash/cleaning station, something else, like a fire hydrant, is a lazy bit of nonsensical background. The best reinvention in "Shark Tale" is inspired - a pair of Rastaffarian jellyfish with day-glo hats and electrical dreads. A shrimp cocktail with a sob story is another cute touch, but the good ideas stop flowing pretty quickly. Well integrated 1970s musical selections can make a film pop, but "Shark Tale's" use of the theme from "The Godfather," "Car Wash" and "Movin' On Up" merely make it feel dated.

Oscar (voice of Will Smith) is a cleaner wrasse working at the reef whale wash. He is tired of being a nobody and dreams of a life atop the reef where he can be “somebody.” Lenny (voice of Jack Black) is a Great White Shark with a terrible secret – he’s a vegetarian. When a tragic accident kills Lenny’s brother Frankie, Oscar takes credit for the act, earning the title “sharkslayer.” But, fame has its costs and the two very different fish must form an alliance to survive in “Shark Tale.”

DreamWorks Pictures, on the heels of its amazingly successful “Shrek” franchise, is hoping to score with fans of the big green lug while capitalizing on the wonderful anthropomorphizing of the undersea world creatures in “Finding Nemo.” Directors Vicky Jenson, Bibo Bergeron and Rob Letterman tell the story (by Letterman and Michael J. Wilson) of a little fish with big aspirations as Oscar toils away his days as the head tongue scraper at Sykes’s (voice of Martin Scorsese) Whale Wash but dreams of living the glamorous, wealthy life. When an opportune accident gives Oscar the chance to tell a little white lie that will get him big things, he thinks he is finally on Easy Street.

Lenny, the youngest son of Don Lino (voice of Robert De Niro), doesn’t want to take over the family business” as the co-head of the shark mob with Frankie. He is a true “fishitarian” who has eschewed the fish-eating life to become a vegetarian. When Frankie takes him out to show Lenny how to act as a killer, they cross paths with Oscar. The sensitive shark can’t bear the thought of eating Oscar but Frankie has no such qualms and races forward to make the frightened little wrasse into a snack. Then, wham! An anchor lands right on Frankie’s head. While Oscar basks in the fame of his lie over Frankie’s demise, Lenny must come up with a plan to fit into the bustle of the reef and avoid his father.

The idea of spoofing Mafia mob movies with the humanized under water world characters may be a good one but here, in “Shark Tale,” it does not fare so well. Sure, there are a collection of colorful characters drawn to resemble the actors giving them voice. Cleverly, you get to see the familiar mole on Don Lino’s face, the notable ears on Oscar and full lips of Lola (Angelina Jolie). This physical characterization carries through to Angie the angelfish (voice of Renee Zellwegger) and the accentuated eyebrows of Sykes (Scorsese). It’s very amusing to watch but it is not sufficient to sustain the film. (The Rastafarian characters of Bernie and Ernie (Doug E. Doug and Ziggy Marley), as Sykes’s electric-shocking, dreadlocked jellyfish bodyguards are pretty an entertaining duo, though.)

This maritime gangster film doesn’t have a strong enough story to keep the interest level much above that of older kids. There is a great deal of fast talking banter and wise ass remarks as Oscar bluffs his way through life searching for the thing that has been around him all of the time. When you meet Angie and see her adoration and love for Oscar you know what the outcome will be, even when he is tempted by the wily, gold-digging charms of Lola, a lionfish with a little dragon fish mixed in. The morals of Oscar’s story are, basically, to look in your own yard for what you want most and be tolerant of your neighbors. It just took a predictable 90 minutes to get there.

While I had few problems with the vocal talents, I found Will Smith’s voicing of Oscar to be annoying after a while. There were no standout single performances as we saw in “Shrek,” “Monsters, Inc.” or Finding Nemo” (which I think was robbed of an Oscar ® nom for best supporting actress by Ellen Degeneres), which is a surprise considering the actors involved. This, too, may be a fault of the writing, as the characters, once presented, do not change throughout the film. Even Oscar, though positively redirected, is still the same smart-ass wrasse in the end.

There is plenty for the kids to watch that will keep them entertained for the duration of “Shark Tale” but not nearly enough to keep any but the the less discerning adults amused. Product placement with such brands as “Coral Cola,” “The Gup,” “Kelpy Kremes,” Preparation O” and “Fish King” is far overdone and not that all that clever. (Guys, get an original thought.) I had hopes going into the film and came out with them unrealized. And, that’s too bad.