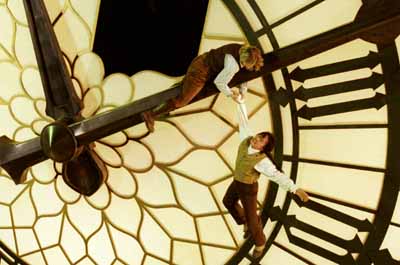 Chon Wang (Jackie Chan), since his last adventures in "Shanghai Noon," has become the respected sheriff of Carson City, Nevada. But, when he learns that his honorable father was murdered and his sister is on the trail of the killers, he heads to New York City, grabs his former partner Roy O'Bannon (Owen Wilson) and sets off to London in a quest for revenge in "Shanghai Knights."

In the Forbidden City, an evil Englishman murders the Keeper of the Imperial Seal despite the efforts of his feisty daughter Lin (Fann Wong). She contacts brother Wang (Jackie Chan, "The Tuxedo"), now sheriff of Carson City, who in turn heads to New York to get his "Shanghai Noon" gold from Roy O'Bannon (Owen Wilson, "The Royal Tenenbaums") in order to follow the killer, as his sister did, to London. Roy's not an easy guy to shake, though, so the odd couple are once again teamed for a common goal as "Shanghai Knights."

Instead of one fish out of water, Gough & Millar move their heroes to turn of the century London, so that the brash Americans can inspire Arthur Conan Doyle (Thomas Fisher, "Enigma") to create Sherlock Holmes, offhandedly take out Jack the Ripper and discover the young Charlie Chaplin all in the hunt for Lord Rathbone (Aidan Gillen, Showtime's "Queer as Folk"), tenth in line to the throne. In addition to helping form British notables, they hit all the tourist spots, tussling with Beefeaters, pillow-fighting with prostitutes in Whitechapel and evading bad guys at Madame Tussaud's before literally hanging off the face of Big Ben. The screenwriters pay homage to the movies of Harold Lloyd, Abbott and Costello and the Three Stooges with their revolving walls and peephole paintings, but they neglect simple story logic and take far too many detours along the way.

Wilson, with his wide blue-eyed innocence amidst the most guilty of circumstances, has great comic delivery and a knack for reaction shots. He also has chemistry with the extremely charismatic Jackie Chan. Chan does his stuff with a revolving hotel door, English bumbershoots (to 'Singin' in the Rain') and library ladders, but they lack the lightening quick execution that has been Chan's strength. Fann Wong doesn't have much character development as Roy's love interest, but she is fleet of foot, picking up Jackie's slack. Aidan Gillen plays the villain well, a royal with the look of Johnny Rotten.

Production design (Allan Cameron, "The Mummy Returns") and costume (Anna Sheppard, "Schindler's List") are straight out of Acme props, with snow that looks like Ivory Flakes and a Whitechapel bordello more in line with New Orleans than a London ghetto.

"Shanghai Knights" clearly sets up its next episode for a Hollywood setting, but if it continues down this path we may be in for a "Shanghai Surprise."

Once in a while, a sequel proves to be superior to the work that spawned it. Note, for example, "Final Destination 2." Unfortunately, "Shanghai Knights" is not a better film than "Shanghai Noon," which, at least, had the fresh pairing of its stars, Chan and Wilson. It wasn't a match for Chan's Hong Kong action comedies, like "Drunken Master" and "Supercop," but it gave the inventive move meister another foot in the door of the American movie business. The best that can be said for "Shanghai Knights" is that it is more of the same, with the chance to play in different locales like New York and London.

"Shanghai Knights" starts out in typical fashion with Chon's estranged father (Kim S. Chan) brutally knifed to death by English Lord Rathbone (Aidan Gillan) who steals the imperial seal of China. Chon's sister, Lin (Fann Wong), fought like a tiger to save her father but to no avail. She sets after Rathbone for London and sends word to her brother of her plight. Chon heads to New York City to get his share of the gold from his previous adventures with Roy, but his old sidekick had squandered it all on wine, women and song - especially women. The pair is forced to stow away aboard ship in order to get to London where Lin has tracked the killer. Many fights and chases ensue until the big finale where Con, Roy and Lin must save the royal family from the evil intent of Lord Rathbone.

"Shanghai Knights" is going to have a ready-made audience that will likely garner the box office receipts akin to its predecessor. It has all the requisite action with Jackie Chan doing his patented moves as he fights the bad guys with ladders, book, vases, swords and whatever else comes to hand. Chan can still move with grace but he is getting a bit creaky for such action. He is hands above his CGI performance in last year's "The Tuxedo," though, and is still a pleasure to watch the master at work.

The clunky structure of the story - plot, fight, comedy, plot, fight, comedy, etc. - make things mildly amusing but the Hollywood influence detracts. Screenwriters Alfred Gough and Miles Millar use the buddy/king fu formula from the first film and reheat it without adding any new ingredients - except location. This time it is East meets Western meets Jolly Old England at the turn of the 20th century but with modern music - "England Swings," "Singing' in the Rain," "Time of the Season," "Magic Bus," "Winchester Cathedral" and "One (is the Loneliest Number)" are just some of the contempo songs used - and hipster lingo that only distance the viewer from the "story." If I want to here lines like, "Who loves ya, baby?" I'll channel surf to an old "Kojak" TV show. Here, it is just a distraction.

Chan, of course, is always a pleasure to watch and he is here, too. Owen Wilson, with his funky face and humorous air, has fun as Roy O'Bannon, but it is not a stretch. Fann Wong, as Chon Lin, is pretty and physically capable in the fight scenes. Aidan Gillen, as bad guy Rathbone, doesn't distinguish himself as anything special. Thomas Fisher, as Scotland Yard inspector Artie Doyle, is amusing and underutilized. Young Aaron Johnson plays street urchin Charlie, who shows up at the appropriate moment to steal something from someone.

While "Shanghai Knights" is, ostensibly, a period comedy, there is far too much contemporary reference. The scripters do try to pay homage to comedy greats such as Charlie Chaplin and Harold Lloyd - especially to Lloyd's famous slapstick comedy on a giant clock. In the end, though, I just wanted the movie to be over so I could go home and watch reruns on TV. "Shanghai Noon" was fun and "Shanghai Knights" is more of the same - just not as much fun.