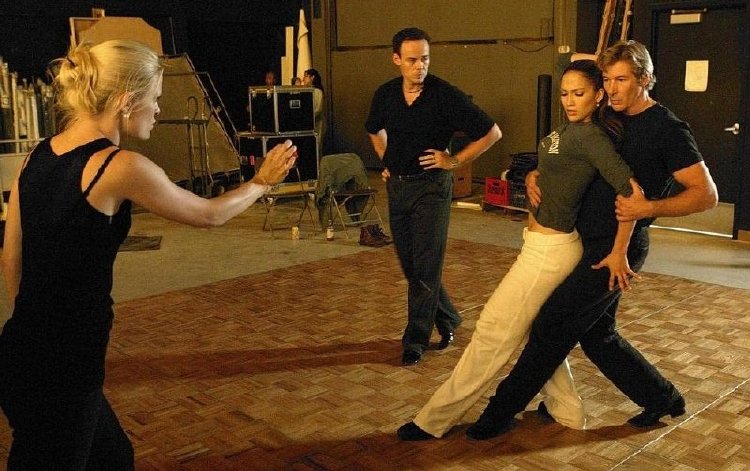 John Clark (Richard Gere, "Chicago") is a Chicago probate attorney with a wonderful family, but the daily grind finds him wanting something more. On his commute home he spies a lovely, but sad looking woman staring out the window of Miss Mitzi's dancing school and, on a whim, decides to visit the old building in the remake of the 1996 hit Japanese film, "Shall We Dance?"

Anyone predetermined to avoid the "Shall We Dance?" remake due to JLo's presence needs to be assured that the actress is really in a supporting role here - this is Gere's movie, and as he proved in "Chicago," he's got the heart, if not the feet, of a true hoofer - perfect for a film about a blossoming beginner. Screenwriter Audrey Wells, who spun a pleasing little chick flick out of a travelogue with "Under the Tuscan Sun," fumbles the ball with Gere's motivation for keeping his lessons secret here (in the Japanese culture, couples dancing, even touching, publicly is considered somewhat shameful), but otherwise she sticks close to the original, merely updating it for American audiences and mores.

The film opens with Clark's wife Beverly (Susan Sarandon, "Moonlight Mile") and teenaged son Evan (Stark Sands, "Chasing Liberty") cajoling his fourteen year old daughter Jenna (Tamara Hope, "The Deep End") off of her cell phone long enough to let him blow out the numerous candles on his birthday cake. Later, his wife apologizes for her gift of a bathrobe, exclaiming that the problem is, John just doesn't ask for anything. 'Tell me one thing you want that comes in a box,' Beverly asks, blind to the fact that it's his box that John wants out of.

Entering Miss Mitzi's, John is first exposed to the flamboyant and zaftig Bobbi (Lisa Ann Walter, "Bruce Almighty") whose demands to 'stop looking at my ass' presage the all male ballroom beginners' thoughts regarding ice princess Paulina (Jennifer Lopez, "Gigli"), the professional dancer whose outward evocation of John's inner need lured him in. All the characters from the original are here - there's the shy, overweight guy, Vern (Omar Miller, "8 Mile"), the homophobic 'ladykiller,' Chic (Bobby Cannavale, "The Station Agent") and sprightly owner Miss Mitzi (television actress Anita Gillette, "The Guru") who the lads are dismayed to discover will be their actual teacher. Stanley Tucci takes over the role of crazy wig-donning Aoki (Link here), John's coworker who puts on a front at work and indulges his hetero need for sequins at night (Tucci, in his flowing wig, somehow conjures up none other than red carpet style guru Steven Cojocaru!).

As in the original, John's wife (here a high ranking Saks manager, rather than the Japanese homemaker) becomes suspicious about his weekly late night and hires a private detective. P.I. Andy Devine (Richard Jenkins, "The Core") is a colorful type who wipes crumbs from his hands into his fish tank and combs his eyebrows. His assistant, Scotty (Nick Cannon, "Drumline"), quotes Simone de Beauvoir and Thoreau ('The mass of men lead lives of quiet desperation'). During the course of their investigation, the two become avid fans of dance competitions and Devine an admirer of his client.

Director Peter Chelsom ("Serendipity," "Hear My Song") cannot capture the sublime melancholy which pervaded the original, instead going for a straightforward crowd-pleaser. The original's running time has been trimmed back by over fifteen minutes, which makes for a livelier pace, although Tucci's introduction in the dance club loses its surprise factor because his prior office presence has been relegated to background extra. The humorous elements are less subtle, although only Walter's performance teeters into broad comedy. Wells substitutes the quiet hurt of the Japanese housewife with American confrontation, but also gives Sarandon a truly beautiful speech (delivered to the detective) explaining that the reason for marriage is to bear witness to another life. She neglects to give Gere a device upon which to hang 'quiet desperation,' however (the original's Koji Yakusho had a new mortgage hanging over his head). Nothing really seems wrong with John Clark's life.

Gere wouldn't seem like the natural choice for this role, but he is able to evoke the bemused quality of a middle-aged man who has drifted out of the center of his family's life. His joy on the dance floor is palpable, particularly when he breaks into a quick step during competition. Lopez interprets the stiffness of the original's Mai too literally, only coming alive on the dance floor (her demonstration of how to dance the rhumba using Walter as her partner is a standout scene). Sarandon is dependable and delivers the right dose of romanticism without becoming syrupy. Jenkins and Gillette provide top-notch support, creating fully fleshed out characters. Miller has a nice warmth, but Cannavale is disappointing after his tour de force in "The Station Agent" and Walter makes one yearn for the more grounded comedy of the original's equivalent. Tucci also suffers in comparison.

American remakes of foreign films generally fail miserably, but while this one loses nuance in its cultural translation, it's British director has made a commercial film that hasn't lost its heart.