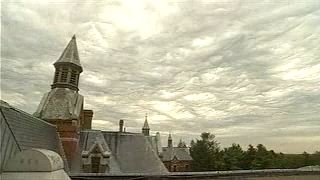 'Well, you know Doc, when something happens it can leave a trace of itself
behind.  Say, like if someone burns toast...'
Scatman Crothers as Dick Halloran, "The Shining"

New dad Gordon Fleming (Peter Mullan, "My Name Is Joe") desperately needs to win a contract to keep his Hazmat Elimination Co., an asbestos removal firm, afloat.  He startles his crew chief Phil (David Caruso, "Proof of Life") by promising town engineer Bill Griggs (Paul Guilfoyle, "In Dreams") they can complete a massive job at the abandoned Danvers State Mental Hospital in one week.  The pressure is on when they and three additional workers enter the foreboding place in cowriter/director Brad Anderson's "Session 9."

Brad Anderson, whose last film, "Next Stop Wonderland" was also shot in the Boston area, has found a magnificent location in Massachusetts' Danvers State Mental Hospital. He and cowriter/star Stephen Gevedon have fashioned an homage to Stanley Kubrick's "The Shining," with the modern feel of "The Blair Witch Project." The film loses its tense grip at its climax, when the titular Session 9 is revealed, but it provides an intensely nerve racking ride getting there.

We know Gordon is under a lot of pressure, not only because of his shaky business and some hinted-at problems at home with his beloved wife and new baby, but because he hears an eerie voice on his first visit to the site. Phil begins to doubt his boss's judgement, particularly concerning Gordon's loyalty to crew member Hank (Josh Lucas, "You Can Count On Me"), who stole Phil's girlfriend and continues to needle him about it. Hank also rides Jeff (Brendan Sexton III, "Welcome to the Dollhouse"), Gordon's neophyte nephew who's afraid of the dark. Mike (Gevedon) is a failed law student who immediately gets drawn into the records and patient histories he finds in the basement, especially the taped nine sessions of split personality Mary Hobbes. Mike, whose uncle was a DA during a satanic ritual abuse case with one of the hospital's patients, knows the history of the place and delights in regaling his coworkers with tales of horrific abuse and botched lobotomies (based on actual stories from Danvers State).

As Mike listens to tapes, Hank discovers a load of silver coins and other treasures hidden behind a brick wall in a basement corridor (we're made privy to the other side of that wall where an unsavory looking medical lab still stands). Hank returns at night to recoup the treasure and doesn't return to the job the next day. Gordon visits the hospital cemetery to make private phone calls to his wife. Phil begins to speak to Mike about Gordon's state of mind. Mike listens as Mary Hobbes takes on one persona after another. Jeff's forced to face his fears replacing a fuse in a darkened room.

"Session 9" strongly resembles "The Shining" as each passing day is announced by title card that precedes aerial shots of a forbidding and abandoned old building with a dark history. A central figure is a father with job pressures who can hear the voices of the past. The film's look is more akin to "The Blair Witch Project" as shot by a professional (cinematographer Uta Briesewitz uses the 24P HD camera - widescreen digital video that apes the frames per second of film and captures every dust mote, paint peel and ray of light). Characters meet their fates in much the same style as Blair Witch (camera blackouts) and one is even found facing the corner. While the name Hazmat surely refers to hazardous materials, its sinister sound is mighty similar to "Blair Witch's" production company, Haxan Entertainment. "The Texas Chainsaw" gets a nod via the prominence of a loud, belching generator and a bloody hand print on a van's exterior.

The cast all turn in good performances, with Caruso being the standout as a serious crew chief trying to keeping things pulled together. Mullan projects just the right amount of confusion to make us wonder if Phil's concerns are valid and an air of sadness that matches the gloom of his surroundings. Sexton III injects a freshness and innocence into the tough, experienced group.

Anderson knows how to build tension. As his characters go off on their individual side tracks, he cuts to the other team members innocently going about their jobs. Each will be impacted by the actions of the others in some way. But above all, Anderson knew a location in need of a horror film when he spotted one.

The grounds of Danvers State Mental Hospital are off limits to visitors. If Burkettesville, Maryland is any indication, they better get more guards.

Gordon Fleming (Peter Mullan) is in a bind. He has a new, unexpected baby and his business, hazardous material removal, is in danger of going under. When he and his crew get a job opportunity at the long-abandoned Danvers State Hospital, he underbids the competition to secure the contract and promises to get the three-week job done in one. It will prove to be a fateful week for them all in "Session 9."

Gordo gets the job to remove asbestos and other hazardous materials from the spooky old mental hospital in preparation for relocating town offices there. Their guided tour of the facility by a local official, Bill Giggs (Paul Guilfoyle), brings them through some of the creepier parts of the former asylum. But, a job is a job and, if they finish in a week, as promised, there is a $10000 bonus in store.

As they get down to their work, things, normal and not so normal, begin to happen. Gordon hears a disembodied voice beckoning him. Phil (David Caruso) is conflicted working with a guy, Hank (Josh Lucas), who is seeing his old girlfriend. Mike (co-screenwriter Steven Gevedon) has discovered a cache of audiotapes and transcripts from old psychiatric sessions (hence, the title) with inmate Mary Hobbs, a multi-personality patient with a dark secret. Gordo's nephew, Jeff (Brendan Sexton III), suffers from night phobia and is afraid to venture into the dark bowels of the hospital. As the agreed upon week draws to an end, Hank mysteriously disappears from the workplace after a nocturnal confrontation with someone (something?) in the hospital. Tensions mount and distrust build among the rest as they watch their chance for the bonus start to slip away. But, there is more, much more, at stake as the hospital and its history of insanity weigh on them all.

I don't want to give away too much of the story of "Session 9," so I'll stop there. What we have here is a spooky horror flick that uses none of the jump-out-at-you-from-the-dark cheap shots that have become part and parcel with horror films since the advent of "Halloween" and "Friday the Thirteenth." There is no cat leaping out of the dark or the shock of suddenly seeing oneself in a strategically placed mirror. With the exception of one shadowy and chilling image at one point spooky interlude in the film, there is little that you can get your arms around as far as what, specifically, is "frightening."

As I watched "Session 9" I became aware of the subtle things that built up during the story that make it a true horror movie. The striking high-definition video camera work by Uta Briesewitz (who worked with the director, Brad Anderson, on his "Next Stop Wonderland") helps to build up tension with close-ups, fluid camera movement and odd angles in a way that would make Alfred Hitchcock proud. Music, too, is used to intense effect, joining with the camera to make simple scenes frightening, even horrifying. Couple these tech feats with an intelligent story that uses elements of "The Shining," "The Blair Witch Project" and, even "The Texas Chainsaw Massacre" and you get a decent, intriguing horror flick. Additionally, the brilliant decision to shoot at Danvers State Hospital gives the film another starring character, the institution itself, which lends even more chills to the equation.

Acting is another factor that raises "Session 9" above the usual dreck presented in recent horror hits like "Scream," "I Know What You Did Last Summer" and their sequels. Those films took good-looking, though generic, young actors and actresses and put them to use to build up a body count, substituting mayhem for real horror. Anderson opted, instead, to use mature, experienced actors like Peter Mullan and David Caruso to fill his characters' shoes and the difference in casting quality is notable. Mullan, in particular, puts an arc on his character, Gordon, as the troubled guy who slowly and inexorably falls under the pressures of family, job and, finally, Danvers State Hospital.

The rest of the small cast fit the bill as people, not just fodder for the mayhem. David Caruso, as Gordo's senior man and near equal in the business, shows just how good an actor he is. He made the jump from TV's "NYPD Blue" to film far too soon and his decisions in the roles he took (I'll never forget the horrendous "Jade") were less than star making. He rolls his sleeves up and does the job well here. Gevedon, Lucas and Sexton are more than fodder, too.

The only problem with "Session 9" lay in the uninspired ending. It takes on a fairly conventional finale that covers old ground and is a bit of a disappointment after the terrific (and inspired) build up. The pleasure is getting there and I wish that Anderson and Gevedon had kept up the steam they had so ably built during the bulk of the film

"Session 9" is an unusual feat. It is scary, doesn't use cheap tricks and raises goose bumps with its intelligently rendered, subtle horror. Because of the local interest of Danvers, it should do well with the Northeast crowd. I hope it gets the national distribution it deserves.