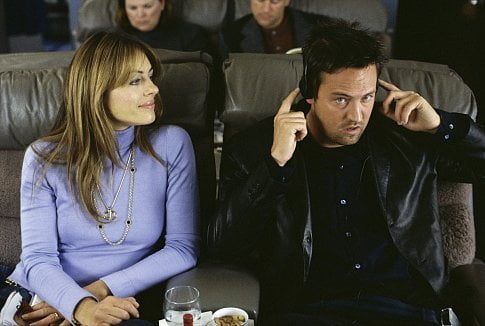 Process server Joe Tyler (Matthew Perry) may work long hours, suffer indignity after indignity and has no benefits, but he is damn good at his job - until lately. Over the past two months it has been as if his marks have been warned of his coming to serve them. Desperate, he wrests an important subpoena job from his competition, fellow server Tony (Vincent Pastore), and he gets more than he bargained for in "Serving Sara."

Reginald Hudlin has made a mark for himself in the comedy flick world, starting with "House Party" and on to "Boomerang," "Bebe's Kids" (the first African American animated feature) and "The Great White Hype." Although none of these tomes stands out in my mind, they do rep the fact that Hudlin is keeping a steady job in his chosen profession. "Serving Sara" continues his comic direction, but the film has proven to be troublesome. Most famously was Matthew Perry's substance problem (and, to the actor's credit, rehabilitation) during the film's production. But, the problems with the film are not due to Perry.

The story is pretty simple. Joe, years ago, had been a hotshot lawyer moving in the fast lane until confronted with the job of representing the mob. His scruples cost him his career, his beautiful fiancée and his future. But, he proved to be a darn good process server, until, unbeknownst, Tony sabotaged nearly every target by warning them of Joe's imminent arrival. Even though he isn't doing so hot Joe convinces his boss, Ray (Cedric the Entertainer) to give him the paper to subpoena Sara Moore for a divorce hearing initiated by her Texan cattle baron husband and partner, Gordon (Bruce Campbell). Her hubby, it seems, has plans to dump Sara, take half her fortune and hook up with trophy babe, Kate (Amy Adams). It falls upon Joe to break to serve the summons to Sara and break the bad news of her pending, and totally unexpected, divorce.

Things go as planned and Joe serves the paper to Sara at her sister's suburban home. He is waylaid, when he leaves, by two thugs working for one of his previous "clients" and they take his BMW, just because they can. Beaten and bruised he takes a bus back to the city only to find that Sara is also on board, devastated by her husband's treachery. She starts to babble about getting back at Gordon when Joe clues her in on what being served means and tells her the only way out would be if Gordon was served first. The dawn lights on Sara and she cuts a deal with Joe to deny that she was served and, instead, hand her subpoena for divorce to Gordon - for a cool million dollars. This begins a cross-country romp to serve the husband before Tony can serve the wife.

The level of humor throughout "Serving Sara" is sophomoric to say the least. Stepping in cow dung, sexual innuendo (and, sometimes, not so much innuendo), bull fart gags and (ahem) "milking" said bull, and a sex charged ride down an airport luggage chute are representative of the humor used to entertain us, the undiscerning masses. There is a message of right over wrong and faithfulness over infidelity (the romance between Joe and Sara, a married woman, is chaste through most of the film) but the script by Jay Scherick and David Ronn keeps it light and goofy, a bit too much of each. Matters of taste make me wonder - as Joe's plane lands in Texas we are given a long look at a billboard stating: Texas - home of Old Sparky, 361 Satisfied Customers.

Primarily, the problem with "Serving Sara" lay in the casting of Elizabeth Hurley as the title character. The actress doesn't give any life to the role of Sara, who should be greatly pissed as the jilted wife of a Texas cattle baron. It strikes me as odd that Hurley, with a rep as a babe, would be cast as the tossed aside wife. Once again, as in "Bedazzled," she is a clotheshorse (though the latter film makes much better use of her limited thesping talent). Hurley simply didn't convince me that she is Sara and lacks any chemistry with her costar. A plainer, more capable actress may have been able to breathe some life into the role and provide the needed spark between Sara and Joe.

Matthew Perry is one of the better things in "Serving Sara." The actor shows a cockiness that is both sarcastic and tough. When the mob boys rough him up he knows he can't do a thing to stop them, but it doesn't stop him from telling just what he thinks. Perry has a sometimes caustic, often funny wit that is a departure from his "Friends" persona, Chandler Bing. I enjoyed his bumbling, nervous, yet likable, dentist in "The Whole Nine Yards" and the actor takes on a very different character with Joe. His comic timing and line delivery are pro and he gives edge to the humor.

The rest of the cast rate from good to wasted with Vincent Pastore doing a first rate job as Tony, a none-too-bright but cunning guy (after all, he has duped Joe for months) who always ends up at the wrong place at the wrong time. Cedric the Entertainer chews the scenery and camps it up to decent affect as Joe's boss. Entirely wasted is Bruce Campbell as Sara's husband and partner Gordon, a cookie cutter jerk (who apparently needs glasses if he's dumping classy, smart and sexy Sara for bimbo with boobs Kate (Amy Adams)).

The techs are adequate to the task but nothing special occurs behind the camera. Helmer Hudlin tries to make a hip comedy, but his dependence on slapstick defeats the possibility of creating a more darkly edged tome, which it should have been.