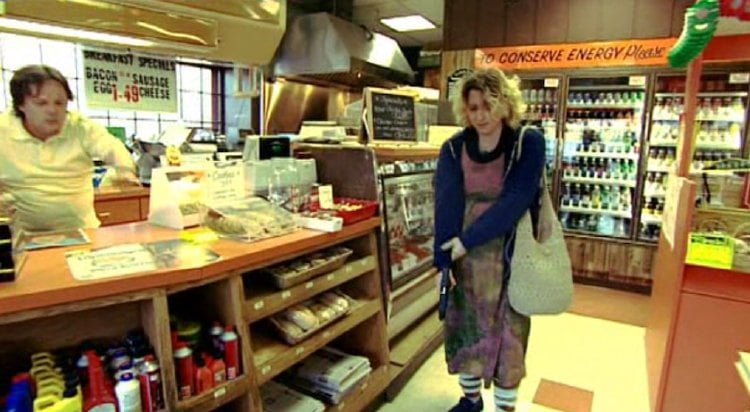 Writer/director Daniel Minahan makes his feature debut with an audacious idea that takes our society's current fascination for reality TV and brings it one step beyond. "The Contenders" is a hugely popular TV program where contestants are randomly chosen from all over the country. Two-time champ Dawn (Brooke Smith) has the privilege of nabbing one of the spots on series 7 the show and is ready for a new fight, even though she may go into labor at any time.

The other contestants include: Tony (Michael Kaycheck), an unemployed, blue collar family man; Connie (Marylouise Burke), an ER nurse with a strong faith in God; Franklin (Richard Venture), an aging believer in conspiracy theories; Lindsay (Merritt Weaver), an 18-year old high schooler with a pair of doting parents; and, Jeffrey (Glenn Fitzgerald), a dying artist who happens to be Dawn's old flame from high school. As we meet each opponent we get an up-close-and-personal look at each player with interviews and home movies to bring dimension to the contestants of the hunt.

"Series 7," as I said, is an audacious idea and Minahan has some clever moments, but not enough to sustain it for almost 90 minutes. One problem with the film is that the concept of killer TV is no longer all that far-fetched. When "Network" broke ground in the 70's with the first use of "reality TV" as its focus, it was way over the top, concept-wise. Now, with such shows as "Survivor" and "Temptation Island," a TV show that showed, not staged, real killing is almost a logical progression for our society's entertainment needs. What was outrageous 30 years ago is getting to be commonplace today.

The construction of the film is also a problem. The idea of "The Contenders" show should be geared to a 60-minute slot, but that won't cut it for a feature-length film. The extra time is filled in with a lot of the up-close stuff, a la "Wide World of Sports," with the contestants baring their souls to the camera, with flashbacks to weddings, graduations and special moments. There even is a music video that is overused. I understand Minahan's intent, but the extra material and insight is a distraction from "the show" and the individual hunts.

The script does have a good deal of tongue in cheek humor, to its credit. Minahan strikes out at the "reality" of reality TV with a side bar on media manipulation with Jeff, Dawn's teen love, chosen, on purpose, to enhance the drama of the show. He's also dying of testicular cancer for an additional audience draw. Lindsay's folks are like the fanatical parents of any kid in competitive sports - only, here, they cheer her on to "blow that dirty old man's head off." The actors are uniformly convincing as real people in a real life-or-death struggle where it's kill or be killed. Brooke Smith, you'll remember her as the girl trapped in the pit in "The Silence of the Lambs," is over the top as the tough pragmatic, unprincipled and deadly Dawn. Of the ensemble cast, Smith is the star.

"Series 7" is a good showcase for the varied talents of Daniel Minahan. His first run out of the gate is flawed, yes, but shows enough talent to want me to see what he will do next. The scary thing is, the far-fetched world he creates isn't all that far-fetched anymore.