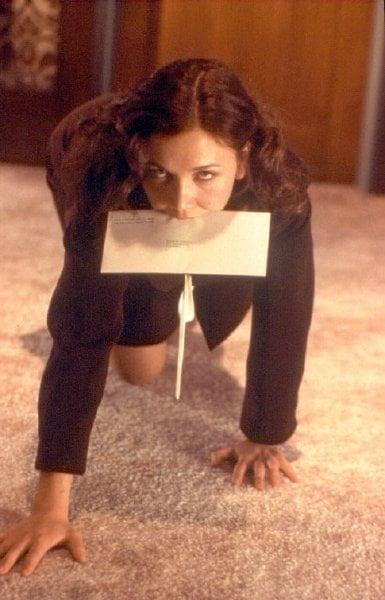 Director Steven Shainberg and screenwriter Erin Cressida Wilson took the germ of an idea from a short story by Mary Gaitskill and have fashioned one of the most unique films of the year featuring a star-making performance by Maggie Gyllenhaal. While Steven Soderbergh's supposed followup to "sex, lies and videotape" flopped, its star Spader delivers the goods with another speciality performance as a guy with unusual turn-ons.

Shainberg teases us by opening with a crisply dressed Gyllenhaal going calmly about her duties yoked to a black metal rod (not the end, but the middle of the story) before getting linear.

Lee is undeterred by a 'Secretary Wanted' sign that looks like a vacancy at a motel surrounded by white bulbs (with the few odd red ones for good measure) followed by the departure of the job's prior, sobbing occupant, but we certainly know we've entered an abnormal realm. Production designer Amy Danger presents a law office which looks more like a Lynchian bordello, with a long eerie corridor leading to the lawyer's den. Spader shrinks inside, tending orchids, that most sexually twisted of botanical seducers. With eyes bulging, Grey conducts a very weird interview, then gives the oddly attired Holloway the job.

At first things are quiet, but then Grey begins a series of criticisms more forceful than his personality would suggest. Odd punishments, like setting mousetraps in difficult corners and searching through trash bins, are meted out, but Lee soldiers on without complaint. Grey catches sight of the cut marks on the back of Lee's leg, questions her, and tells her to stop harming herself. Then a typo circled in red turns the punishment physical and Lee begins to blossom. When Grey's lust makes itself outwardly apparent, he lashes out at himself by banishing Lee, who returns to begin a unique campaign to take the romance out into the open.

Describe "Secretary" and it sounds sick and twisted, but the miracle of Shainberg's film is that it truly is romance. He gets his audience to yearn for a connection between these two emotionally scarred souls, no matter that it's manifested in such a kinky way. Gyllenhaal is astonishingly good as the lump of a girl who gradually turns into a sexual temptress by changing her posture and demeanor (with a little help from Majorie Bowers' costumes, but thankfully without taking off glasses). Spader is deliciously mysterious, his outwardly bad behavior hinting at the desirable, if confused, man hiding behind it. Theirs is the most unlikely and magical of screen chemistry.

A young woman, Lee Holloway (Maggie Gyllenhaal), released, not long ago, from a mental institution, seeks an undemanding job as a secretary where she will only have to type and file and get coffee. She takes a job with, she will soon discover, demanding attorney E. Edward Grey (James Spader) who uncovers Lee penchant for self abuse and mutilation. His understanding and caring soon turn the employer-employee relationship into sex and sadomasochism in the wildly different love story, "Secretary."

As I watched the offbeat tale unfold, with all its weirdness - the physical abuse, anal retention, dominant/subservient B&D relationship and inflicted pain - I couldn't help but have a cheery feeling about how "Secretary" would turn out. In a David Lynchian way, Lee and E. Edward are made for each other as he convinces her to stop her self-mutilation. He replaces it with an S&M treatment, mainly spankings, for the far too frequent spelling errors Lee makes in his correspondence. Before you ask, "why doesn't she use spell checker?" Mr. Grey does not allow computers in his office and requires Lee to use an IBM typewriter instead. The ongoing error/punishment cycle, with the mistakes circled in red and mounted in a funky place of honor along the hallway to Grey's office, sets to tone of the budding relationship between Holloway and Grey.

"Secretary" is owned by its costars, Spader and Gyllenhaal. Maggie G. makes an amazing breakthrough in her first starring role (she appeared in "Johnny Darko" with brother Jake) and eats up the screen. Her body language exudes with a hurt-me posture but she becomes more assured as she learns what it is that she wants from life - E. Edward Grey. Gyllenhaal's deft character study takes Lee from a troubled, unhappy young woman from a broken home, with her dad (Stephen McHattie) succumbing to the tragedy of excessive drink, to a confident and happy lady by the end. And, I had no doubt that this would be the case.

James Spader answers the question of: "what became of the character, Graham Dalton, that Spader played in "sex, lies & video tape?" He changed his name and went to law school to became a successful, if psychologically screwed up, attorney, living the life of a feudal martinet in his private law firm as he goes through a cycle of hire-abuse-fire of one secretary after another. Grey even has a permanent, light-surrounded "Secretary Wanted" sign under his shingle. Spader's performance is the perfect foil for Lee and reps his own character study of a man with a whole passel of deep-seated emotional problems. He and Lee are a two-piece puzzle that fit together perfectly.

First time helmer Steven Shainberg had adapted the Mary Gaitskill short story (with Erin Cressida Wilson, who is credited with the screenplay) and has created one of the most appealing, if strange, love stories of the year. Shainberg is joined by a team of talented technicians that inject artistry and life into this avant-garde romance noir. The perfectly rendered score, by Lynch favorite Angelo Badalamenti, helps maintain the suspense that is a constant undercurrent of the film. Production design by Amy Danger helps contribute to the Lynchian appeal of the film with Steven Fierberg's lensing also complementary.

"Secretary" exceeds any hopes I had for the film. It is a good yarn with a pair of great, nuanced and very different performances from the pair of principles.