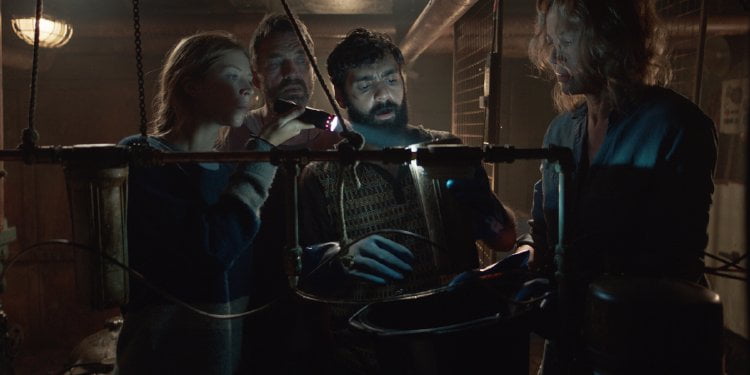 Marine biology doctoral student Siobhán (Hermione Corfield, "Rust Creek") must spend a week on a fishing trawler photographing anomalies of their catch in order to get her degree, but the young woman who loves spending time alone in a lab has trouble connecting to the tightly knit crew of six who fish off the western coast of Ireland. Just after attraction sparks with Johnny (Jack Hickey), though, the boat’s power dynamics are turned upside down after the captain, Gerard (Dougray Scott) sails into restricted waters right into the maw of an unknown, highly infectious life force in “Sea Fever.”

Writer/director Neasa Hardiman has made a taut little thriller which, while very reminiscent of “Alien,” is steeped in its own world aboard a small trawler. It also couldn’t be more timely, its themes of sacrifice for the common good especially resonant during the COVID-19 pandemic.
Special effects are minimalist, especially as the film hits its climax, but the ensemble ensures each of their seven characters matter.

A second theme for the film could be science battling superstition, the crew recoiling from the stranger in their midst’s red hair, considered bad luck by sailors. This prejudice is countered later in the film by Gerard’s wife Freya (Connie Nielsen) as she recounts folklore behind bioluminescence, a story of a woman’s love and sacrifice. Hardiman has invested Siobhán with both sides of the equation.

The film sets a clichéd conundrum in its opening moments as we, the audience, witness a conversation between the married trawler owners. They’ve just put off paying one of their crew, later discussing a financial predicament so strained, their boat ownership relies on the next catch. They’ve even already spent the fee they received for having Siobhán onboard. When the couple sees the restriction placed over their usual fishing ground, it is just another worrisome blow, but Freya has no idea that Gerard has steered them towards it nonetheless.

Siobhán, who’s made some inroads with Omid (Ardalan Esmaili, "The Charmer") by admiring his engineering skills, joins in to help figure out what’s going on when the ship shudders to a halt and discovers alien discs appearing on the inside of the hull which are eating away at the wood. Aggressively poking at one, Gerard uncovers something which Siobhán says looks like a giant barnacle. Gerard suggests now would be the time for her to complete the dive she has to make. What Siobhán finds sends her back to the surface quickly.

Hardiman allows her ensemble an escape, but a terrifying excursion to another boat (which allows Gerard the opportunity to explain the meaning of ‘sea fever’) is reflected back on board when one crew member suffers a horrific fate. Siobhán pulls out her microscope and discovers parasitic eggs, unseen and everywhere.

As in “Alien” we witness a crew debate the strict demands of quarantine and, of course, not all are willing to embrace them. Hardiman’s directed an efficient thriller (it runs under 90 minutes), deriving tons of atmosphere from her location’s cramped quarters above a vast unknown. The committed cast also includes “Mandy’s” Mother Marlene, Olwen Fouéré, as the boat’s cook and Johnny’s aunt. “Sea Fever” reflects on today’s most important issue as it delivers thrills.

Siobhan (Hermione Corfield) is a marine doctoral candidate sent for a research gig aboard an Irish fishing boat owned by Freya (Connie Nielsen) and captained by her husband, Gerard (Dougray Scott). Things get interesting when Gerard brings the boat into an exclusion zone and it comes under attack by tentacled alien creatures in “Sea Fever.”

First-time feature film writer-director Neasa Hardiman creates a sci-fi monster-at-sea story that, though derivative of such classics as “Alien” and the later versions of “The Thing,” but has enough originality and an interestingly constructed sci-fi/monster story to make it a film that stands on its own.

Young, ambitious Siobhan resents that her university mentor forced her to take the research job on Freya’s boat to get practical, hands on research experience. Things go routinely aboard the vessel as the small crew prepares to start catching fish. Radar shows a large mass approaching under water, then CRASH! The boat is disabled and Gerard orders Siobhan over the side in diving gear to “scrape off the barnacles.”

What she finds, though, is not barnacles but the lamprey eel-like creatures that are attacking the boat. And, their oozing slime begins to spread and corrode. Then, they come across an apparently abandoned ship and Siobhan and Johnny (Jack Hickey) are sent to investigate. They are not ready for the gruesome scene they find. This is when “Sea Fever” becomes man versus monster.

The characters are not given much by way of dimension or development and the “science” of the story tends to flip flop from focused - we cannot kill a creature just because we do not understand it – to “it’s us or them” survival. Part of this, though, is the obvious enthusiasm of the filmmakers in telling their monster yarn, and I applaud that gusto.