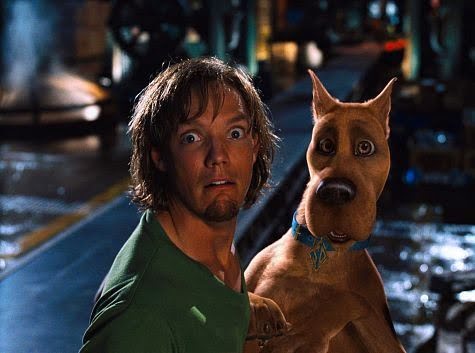 Vapidly handsome Freddie Prinze Jr. is just right for egotistical Teen Beat cover boy Fred. While his bleached blonde do gets updated after the film's first scene, his ascot remains. Cardellini, who looks like Janeanne Garofalo's little sister, is Velma personified, although a brief bout with possession uncovers the sexpot within. Prinze's real-life squeeze Sarah Michelle Gellar also gets a dye-job and plays against type as the red-headed dimwit Daphne who's used the two year downtime to 'turn her body into a dangerous weapon.' Matthew Lillard not only gets the voice and body language of Shaggy, he does terrific work acting with his best pal Scooby, a CGI creation not present on the set.

Scooby Doo himself is a wonderful blend of real looking Great Dane motion and cartoonish anthropomorphism, including a disguise as a Mrs. Doubtfire-like granny. The visual effects team, supervised by Peter Crosman ("Monkeybone"), perfectly incorporate the creature into the action. Additional effects, including ghosts, a couple of Gremlin-like monsters and protoplasmic floating heads, are also beautifully rendered. Bill Boes' ("Monkeybone") production design is both bright and dark, featuring both a fine eye for detail and a tinge of Tim Burton. Costume design is terrific, from Daphne's ever changing lilac wardrobe to the spooky staff of Spooky Island. Cinematographer David Eggby ("Pitch Black") does an expert job blending all the elements with a seamless look.

"Scooby-Doo," though, is definitely for the kids. While some implied pot humor (Shaggy's given a love interest - Mary Jane (Ilsa Fisher) - his favorite name, and smoke bellows out of the Mystery Machine) will amuse the adults while flying over the tyke's heads, eventually "Scooby-Doo" loses steam with a bloated climax that matches its bloated bad guy. Still, there's fun to be had with some personality switching and a comically exaggerated martial arts fight that for once doesn't parody "The Matrix."

"Scooby-Doo" may be the first summer movie to be enjoyed not with popcorn, but with Rooby Racks.

Two years ago, the crack private eye team of Mystery, Inc. had a falling out and the four members, Fred (Freddie Prinze Jr.), Daphne (Sarah Michelle Gellar), Velma (Linda Cardellini) and Shaggy (Matthew Lillard), along with his best friend Scooby-Doo (voice of Neil Fanning), go their separate ways. When each is approached by the emissary of Emile Mondavarious (Rowan Atkinson), the wealthy owner of the popular teen theme park, Spooky Island, they all wend their way to the park to investigate mysterious happenings in the big screen debut of TV's longest running cartoon series, "Scooby-Doo."

"Let's split up, gang!" "Jinkies!" "Zoinks!" "Would you do it for a Scooby snack?" "Ruh-roh!" These are all phrases familiar to the millions of fans of the record-breaking cartoon series. Director Raja Gosnell ("Big Mama's House") is given the task of bringing the beloved series with its 30-minute episodes to the feature length big screen and the helmer and his cast and crew prove equal to the task. "Scooby-Doo" is first and foremost for the huge number of fans and, from my very limited exposure to the cartoons, it looks like it fully succeeds - especially given the enthusiastic reaction by the screening crowd I attended with.

Right from the very start, we are thrust into the middle of the a case the Mystery, Inc. team are tasked to solve. When they prove that a terrorizing ghost is just a spiteful janitor, Fred takes credit for the "plan," causing Velma, who came up with the plan in the first place, to quit. Daphne, tired of always being the damsel in distress, also walks. As does Fred, leaving Shaggy and Scooby to fend for themselves. When they meet again, two years later, on the way to Spooky Island, each sets off to solve the mystery. The park, with its scary rides, is the hot spot for the spring break crowd, but there is something amiss. The rowdy teens arrive ready to raise hell but end up leaving as subdued automatons and the Mystery team soon realize that there is something more evil afoot than fake ghosts and phony ghouls. Their lives, and those of the whole world, are at stake and the four must put their differences aside to save mankind.

This is heady stuff from the pen of James Gunn ("Tromeo & Juliet") and the scribe succeeds in bringing the cartoon characters to life, incorporating the small screen show's charm with a suitably full blown yarn about monsters and a power hungry runt named Scrappy-Doo. The filmmakers are obligated to put as much action on the screen as possible and the big climax tends to drag on a bit too long, but this is minor criticism of a well-crafted kids' action flick. The gags and lines from the series are lovingly recreated in this live action world and kept even a novice like me chuckling. There are some big scary monsters in this adventure that may be a bit too scary for younger kids, thus the PG rating. Homage to Shaggy's stoner days is made a number of times, tongue in cheek. When he meets pretty Mary Jane (Isla Fisher) he enthuses, "That's my favorite name!" It made an old hippy smile.

The casting of the members of Mystery, Inc. is inspired. Matthew Lillard is perfect as the team's scaredy-cat driver Shaggy Rogers. He is called upon to do the bulk of the interaction with the CGI Scooby and makes it look real. He moves like a cartoon character, too. Freddie Prinze Jr., always a vapid pretty boy, gets to play just that and is first-rate as the narcissistic Fred Jones (the actor may have found a calling). Sarah Michelle Gellar gets away from her "Buffy" persona and is ditzily fun as the purple garbed Daphne Blake, the chick-who-always-gets-into-trouble-and-needs-to-be-saved. Linda Cardellini looks, talks and acts the part of brainy, under-appreciated Velma Dinkley. Rowan Atkinson is given little to do as the generic bad guy, a role they could have given to almost anyone, it wouldn't make a difference.

The real star of the film is the computer animated Scooby-Doo. I feared, once the film started, that I was going to find the F/X too noticeable. Within five minutes, because of the deft computer work, attention to minute details, brisk, funny writing and capable live acting, I forgot that the Scoob was mere bits and bytes and believe in him as a real character. The details, like his shadow and the slurp that the lovable mutt leaves on his friends' faces, make you stop noticing the special F/X and let you get involved in the story. Other techs are first rate, though note must be made on the costuming by Leesa Evans, especially her garbing of Daphne. Pay attention to the number of wardrobe changes Ms. Blake goes through.

"Scooby-Doo" is a true family film that will appeal to the kids watching the series today and their parents, too, who grew up with the lovable, goofy Great Dane and his pals.