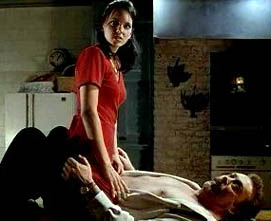 Last year, Keenen Ivory Wayans and his brothers Marlon and Shawn promised us "No sequel!" as part of the advert blurb for their enormously popular "Scary Movie." But, a domestic take of $200 million is apparently enough to make them to go back on their word and the result is "Scary Movie 2."

After the surprise success of "Scary Movie," a sequel was inevitable. The survivors of the first are joined by some newcomers, including Tim Curry posing as a dream research professor right out of "The Haunting" who wants to subject the old gang to Hell House in "Scary Movie 2."

"Scary Movie 2" opens with an "Exorcist" parody teaming with bodily fluid gross-outs before the title credit comes up. It's also the only worthwhile part of this flabby affair. The film got a lot of publicity when Marlon Brando was withdrawn as the Max von Sydow character due to heath problems. James Woods is a hilarious replacement as the child molesting Father McFeely, trading tongue with an unrecognizable Natasha Lyonne ("Slums of Beverly Hills") as 'Megan.' Ex-Conan O'Brien sidekick Andy Richter is Father Harris, who literally ejects his mother from Megan's bed while Veronica Cartwright steps into Ellen Burstyn's role. Then the real movie begins and demonic possession suddenly seems like a better alternative than remaining in the theater.

"Scary Movie" succeeded mostly because of its sheer audacity. It went too far, but it was funny. This "The Haunting" parody, directed by the first's helmer Keenen Ivory Wayans, just goes through the motions of parodying one movie after another without any apparent stab at wit or humor.

Initially, Chris Elliott seems intriguing as Hell House's handyman with a grossly disfigured hand, but by his second scene the 'laughs' are being forced from the same gross-out bits he was introduced with and the boredom squirming sets in.

"Scary Movie 2" wastes a lot of talent (one even almost feels sorry for Tori Spelling appearing in this mess) referencing "MI: 2," "Poltergeist," "Hollow Man," "What Lies Beneath," etc. Clearly this movie's demographics are those who will feel entertained by recognizing bits from other, all better, films.

I wish the Wayans had kept their pledge, after spending an interminable 85 minutes suffering through "Scary Movie 2." If you are a fan of urine, feces and semen jokes, you will probably like this bomb. You get ample, even copious, amounts of each. For more discerning filmgoers (i.e. anyone over the mental age of 12), be warned, this second installment to the new Wayans franchise lacks the rapid-fire humor of the original. The first flick made fun of the modern horror film genre, like "Airplane!" with one gag after another coming at you. If you didn't like one joke, you just had a few seconds to wait for the next. Overall, they hit a lot more than they missed.

With "Scary Movie 2" the Wayans brothers decided to forgo the one-gag-after-another formula and, instead, use a plot-driven story that is mainly a parody of the recent mediocre horror movie, "The Haunting." Sure, there are a whole bunch of other movies and pop culture references throughout - "The Exorcist," "The Amityville Horror," "Dracula," "Dirty Harry," "Mission Impossible 2," "Charlie's Angels," "Hannibal" and those noisy basketball commercials all get their due. The problem with "Scary Movie 2" is it spoofs a movie that, if you saw the original "The Haunting," is really a parody of that classic horror flick. You would think that the seven credited writers could come up with a better idea.

Coupling the lame plot line of "The Haunting" with buckets of bodily fluids makes this venture very unfunny, indeed. The opening "Exorcist" parody, before the credits, turns out to be the funniest part of "Scary Movie 2," thanks to an outrageous twist on the Father Merrin character by James Woods. His unholy holy man made me feel that we might be in for a continuation of the first flick. Then the credits roll and we get the aforementioned buckets. All the original characters are here, but they are simply going through the motions. The filmmakers had something going the first time around, but they lost it here. Even a foul-mouthed parrot named Polly isn't funny, and I love foul-mouthed birds.

Techs are probably OK. I was too numbed by the non-humor of "Scary Movie 2" to notice. You're better off renting the original and getting yourself a pizza with what you'll save by not going to see "Scary Movie 2." They said, the first time, "no sequel." I wish they kept their promise.