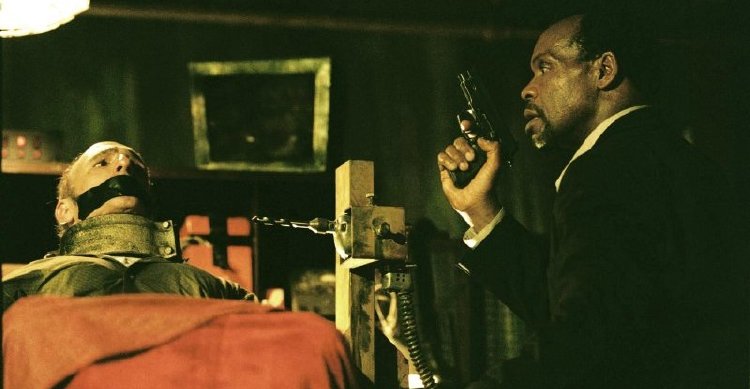 Adam (Leigh Whannell, "The Matrix Reloaded") awakens underwater and becomes hysterical when he realizes he is chained to the plumbing of a filthy tiled bathroom facility and a man who blew his brains out is sprawled across the floor in a pool of blood. On the opposite side of the room is another chained kidnap victim, Dr. Lawrence Gordon (Cary Elwes, "Ella Enchanted") who encourages Adam to calm down to think about their predicament. Both discover "Mission Impossible"-like tape players in their pockets which give them their respective roles in a game set up by a serial killer known as the Jigsaw. Adam is to try to remain alive and Lawrence is to kill him by 6 p.m. or lose his own wife and child in "Saw."

Tyro director James Wan, who also concocted this story with screenwriter/star Whannell, is obviously a huge David Fincher fan as "Saw" ransacks both "Se7en" and "The Game" albeit in bargain basement fashion. But even a hideously over-the-top performance from Elwes and cheesy production esthetics cannot suppress the cringe-inducing impact of "Saw."

The killer's planted clues lead the photographer and the surgeon to find a couple of hacksaws, which the doctor quickly surmises are strong enough for flesh and bone, but not the chains that bind them. A bullet and a key come into play later, after Adam finds, and decides to spare Laurence from, a photo of Alison Gordon (Monica Potter, "Along Came a Spider") and daughter Diana (Makenzie Vega, "Made") bound and gagged.

Soon Laurence figures out that the man who has them there is the Jigsaw, a case he is very familiar with as the police, namely Detectives David Tapp (Danny Glover, "The Royal Tenenbaums") and Steven Sing (Ken Leung, "Red Dragon"), had formerly tagged him as a suspect. Gordon gives the Jigsaw's history to Adam, and flashbacks reveal how the killer kept his hands clean by getting his victims to kill themselves or each other. Tapp succeeded in tracing the man to his lair, but lost his partner, his sanity and his quarry in the process. A series of twists and turns points the finger at several possible suspects - is it Gordon? Tapp, who's back in the action? creepy hospital orderly Zep ((Michael Emerson, "Unfaithful")?

As in "Se7en," "Saw" features a killer making moral judgements with bloody tableaux (an obese man who gets cut up by constricting razor wire is all too reminiscent of Gluttony). His directives always refer to 'the rules' of "The Game," which are often relayed by a mechanical clown (nonvoluntary role playing is another obvious theme, but other details, such as glow in the dark paint on the walls, also appeared in "The Game"). Jigsaw, a killer whose 'puzzle pieces' are never fit together, runs around this film in the black gloves and hooded cloak of a Dario Argento film and Adam tries to fend him off "Rear Window" style, with his camera flash. The film steals it's biggest twist from another masterpiece, "The Silence of the Lambs" (although I, for one, didn't see it coming). With all the film's innovative death setups (Shawnee Smith of TV's "Becker" is outfitted with a timed reverse bear trap on her head and told to get the key from the stomach of her living cellmate!) however, "Saw" is at its creepiest when Laurence's young daughter complains about the man in her room.

A good horror film is hard to come by, though, and "Saw" certainly delivers enough jolts and twisted ideas to rise above the cruft.