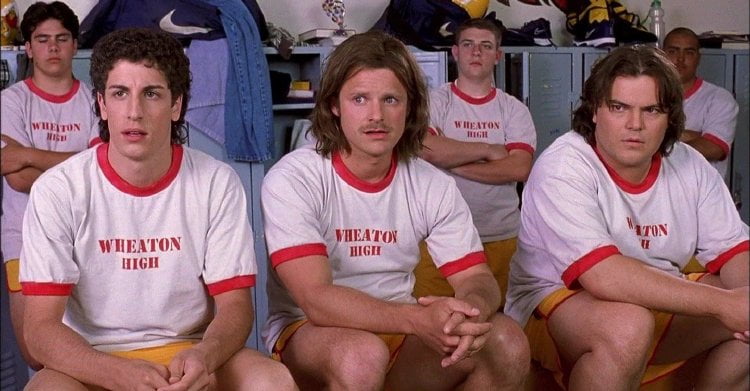 Darren (Jason Biggs), Wayne (Steve Zahn), and J.D. (Jack Black) have been best friends since the fifth grade. Like the Three Musketeers, they've been together through thick and thin. But, when Darren meets an attractive, but cold-blooded and manipulative, psychiatrist, Judith (Amanda Peet), the long time friendship is placed in danger. It's up to Wayne and J.D. to rescue their best friend in "Saving Silverman."

Long time buddies and Neil Diamond tribute band members Wayne (Steve Zahn, "Happy, Texas") and J.D. (Jack Black, "High Fidelity") watch in horror as third mate Darren Silverman (Jason Biggs, "American Pie") disappears under the thumb of his new fiance Judith, (Amanda Peet, "The Whole Nine Yards") a controlling psychiatrist. They're doubly troubled when the return of Darren's 'one and only love' Sandy Perkins (Amanda Detmer, "Final Destination") returns to their home town but doesn't cause a ripple in Darren's devotion to Judith. There's only one thing Wayne and J.D. can think of doing - they kidnap Judith and fake her death in "Saving Silverman."

Written by Hank Nelken and Greg DePaul after seeing a friend engaged to the wrong woman, "Saving Silverman" is directed by 'hit comedy director' Dennis Dugan of such films as "Big Daddy," " Brain Donors" and "Problem Child." It's a dismal, third-rate Farrelly Brothers rip off that attempts to milk humor from such inspired bits of whimsy as having Darren's love interest come from a family of circus freaks AND be about to become a nun. Gross out gags include a visualization of Darren getting butt cheek implants.

"Saving Silverman" is almost saved by stars Zahn and Black. These two are so comically talented they can take bad material and still deliver the goods. They're in "Animal House" mode while the rest of the film trawls along and comes up empty. Jason Biggs can attribute his entire career to the luck of having been cast in the smash hit "American Pie." Peet shows some physical moves but no flair for comedy here while Detmer slaps a brave, sweet smile onto her face and soldiers through. R. Lee Ermey ("Full Metal Jacket") is one note in an embarrassing performance as a psychopathic ex-football coach. Neil Diamond appears at the film's climax as himself and miraculously enlivens the proceedings by belting out some of his old standards.

"Silverman" has its heart in the right place, but the story, by newcomers Hank Nelken and Greg DePaul, is too lightweight to sustain the tale of the battle for Darren's soul. Based on their experience of a friend making a major marital mistake, the story is centered on the three, life long amigos. When Wayne introduces Darren to Judith, he doesn't realize that he has opened a Pandora's box of disaster for himself and J.D. Judith was once in a relationship where her boyfriend was the dominant figure until he died in a kick boxing match. Since then, she has sought a new mate - someone she can boss around and mold into her own vision. Enter Darren Silverman.

Once they realize the magnitude of their error in judgement, Wayne and J.D. try everything they can, including threats and bribery, to get Judith to free Darren. Nothing works until the duo come up with a plan - kidnap Judith and get Darren back together with the girl he called his one and only, pretty Sandy Perkus (Amanda Detmer). The only problem here is that Sandy is about to take her vows to become a nun. Things spiral out of control as Judith repeatedly attempts to escape while Wayne and J.D. play cupid. The boys even bring their idol, Neil Diamond, into the picture to help resolve things.

Thinking about it, this is a real mishmash of contrivance and coincidence that is held together solely by the comedic efforts of Steve Zahn and Jack Black. The pair is able to elicit the film's only laughs with their goofy antics and child-like behavior. They are relegated to providing slapstick guy humor and the two are more than equal to the task. Steve Zahn has been steadily honing his comedic acting skills and gives some complexity to Wayne, the "brains" of the gang. Jack Black has the big-guy moves of a Chris Farley, giving J.D. an amusing physical presence. The neat thing is that the two actors are able to get fresh laughs from stale material.

The rest of the cast doesn't fare as well, though. Jason Biggs is the straight man of the Musketeers and gets very little to do; though having watched his previous films ("American Pie" and "Loser") I'm not sure what attraction Biggs actually has. Amanda Peet is caustic as the manipulative Judith. There is no humanity at all to her character as she single-mindedly strives to recreate Darren into her mind's image. She's a monster that Wayne and J.D. must defeat to save their friend. Unfortunately, there is no dimension to her character. Amanda Detmer brings nothing (or gets nothing) as Darren's one and only. R. Lee Ermey, as the psychotic Coach, made a bad decision taking this role. Tune-meister Neil Diamond gives a good-natured cameo perf as the boys' idol and savior.

Production values are on par with the rest of the film - lackluster and non-involving. Director Dennis Dugan has a track record for broad comedy with films like "Big Daddy" and "Beverly Hills Ninja," but falls flat with "Saving Silverman."

The 2001 movie year has yet to provide us with a "good" film to sink our teeth into. At least, with "Saving Silverman," we get a couple of funny perfs from Zahn and Black. Too bad that the rest of the film lacks their level of humor. Kick boxing deaths and conflicted nuns are not the makings of a good comedy.