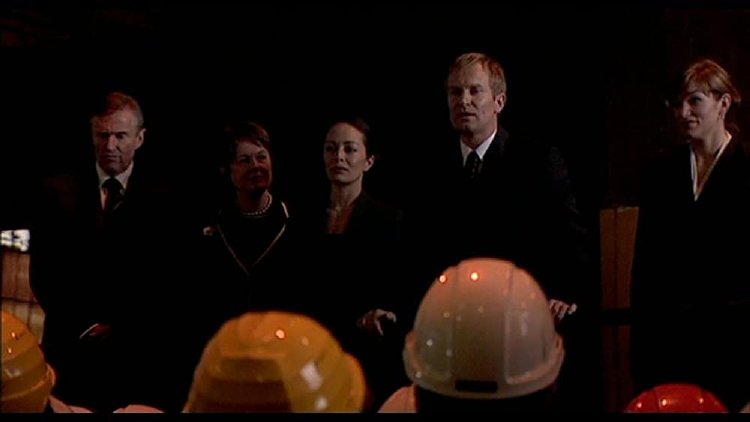 Christoffer (Ulrich Thomsen) and Maria (Lisa Werlinder) have a good and happy life in Stockholm. He is a restauranteur with a successful business and she is an up and coming stage actress who performs Shakespeare and has an assured  future in the theater. Until, one day, the phone rings and Christoffer is told that his father has committed suicide. He is ordered home by his mother, Annaelise (Ghita Norby), to take over the family steel business and to claim, whether he wants it or not, his “Inheritance.“

Just when you think you´ve gotten out, they drag you back. This is essentially the premise for “Inheritance“ as Christoffer is forced to give up the life that he loves and enjoys in Stockholm to return to Denmark and take on the burden of running the family business that may well have killed his father. When he arrives, his mother fully expects him to fill his father´s shoes but must deal with his brother-in-law, Ulrik (Lars Brygmann), who has worked hard for his in-laws and expected to get the top post in the business. Christoffer must also face the reality that times are hard and drastic measures are needed to save his father´s life work.

Maria does not want to give up her acting career or leave Stockholm but, loyal wife that she is, agrees to move to Denmark after Christoffer assures her that it will be just for two years. Her husband turns his attention to the problems at hand, the reality of which is that he must fire upwards to 200 workers and merge with a French steel works if his is to save the family business. This begins a downward spiral as he puts loyalty and kindness aside and come to grips with survival in this dog-eat-dog world. All the while, his mother is conniving to keep her son on a leash, get rid of Maria and create his life the way she wants it, regardless of the toll it takes on Christoffer.

“Inheritance“ is a study of a man´s responsibility to his family and the business that has paid for the easy life that allowed him, for so long, to live it as he wished. What Christoffer doesn´t know when he comes back to the family manor is that his mother is a puppetmaster who uses guilt as a bludgeon to keep control and manipulate those around her. She has never accepted Maria as a part of the family and, once she has her son back home, begins her manipulation that eventually drives her daughter-in-law away and leave Christoffer under her control.

This is not a pretty film as Christoffer devolves from being a happy man to one who lives every day in misery as he must make decisions that adversely affect hundreds of people, including those closest to him. Once he agrees to take over as the family patriarch we see that he is headed for the same fate as his father – do or die, but for the sake of the family, specifically his mother.

Don´t expect a “they all lived happily ever after“ tale from helmer and coscripter Per Fly with “Inheritance.“ Do expect a dramatic story of the toll that family responsibility can take on a man as he tries, in vain, to do the right and good thing but is doomed to lose what he really holds dear.