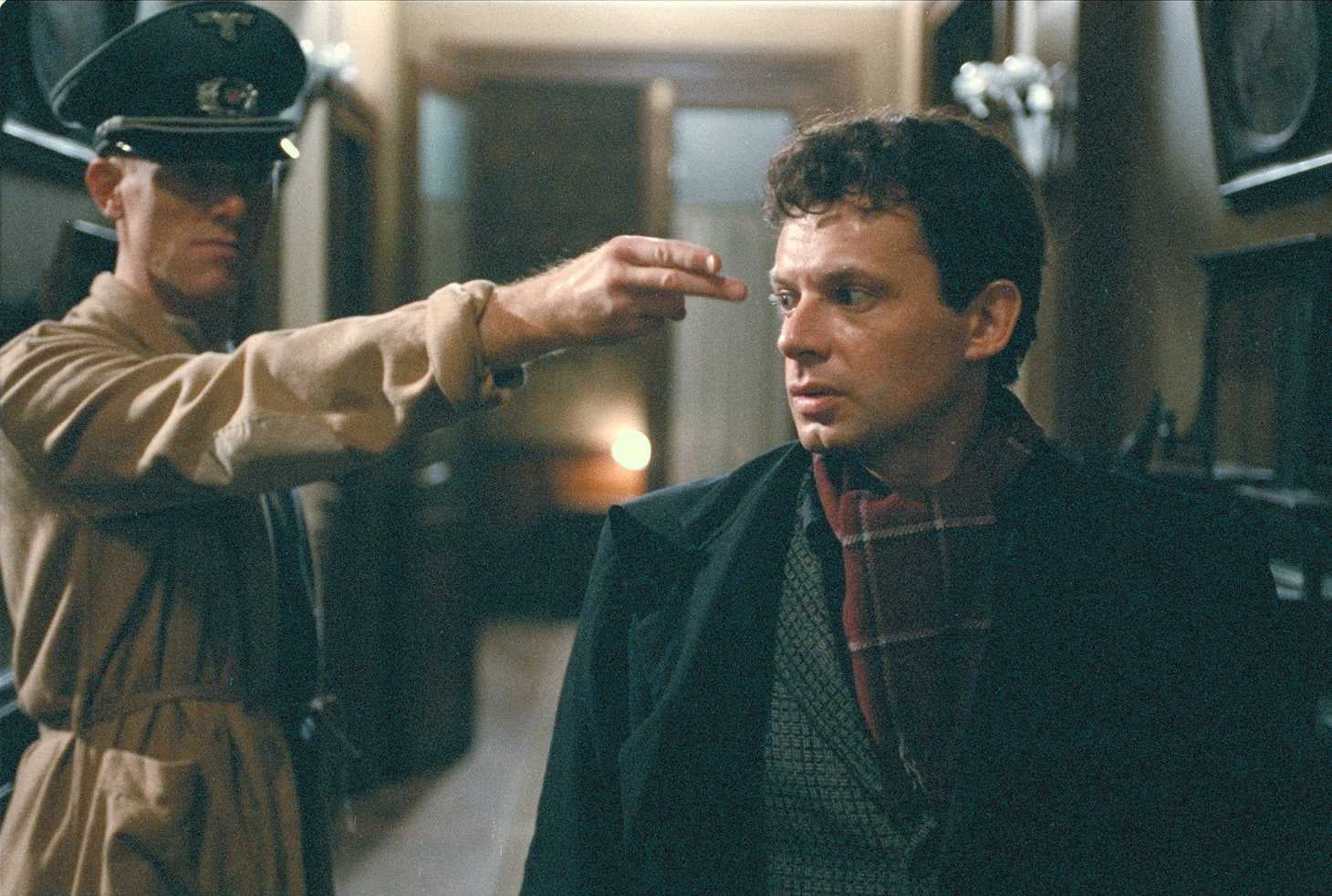 Occupied France was forced to pay enormous sums of money to support their Nazi masters' war effort during the darkest years of World War Two. Daily life had become a struggle for survival and the lines between collaboration and resistance begin to blur. Franco-filmmaker Bertrand Tavernier examines this complicated dilemma by way of his own industry in "Safe Conduct."

Screenwriter Jean Aurenche (Denis Podalydes, "Children of the Century") juggles women while concocting excuses for not writing for German-owned Continental Films in Nazi occupied France. Assistant director Devaivre (Jacques Gamblin, "Dr. Akagi") assuages the Germans while covering for his boss Tourneur (Philippe Morier-Genoud, "Children of the Century"), his own resistance efforts and protecting his wife (Marie Desgranges) and newborn child. Each hopes their wartime actions are "Safe Conduct."

Veteran French director Bertrand Tavernier ("Round Midnight") cowrote "Safe Conduct" with Jean Cosmos ("On Guard!") after meeting the real Jean Devaivre as an exploration of all the gray areas and contradictory motivations that exist during wartime occupation. With a large cast representing a broad cross-section, Tavernier's film bounds along with the rat-a-tat energy of "His Girl Friday," maintaining a light touch while tackling serious themes. The film's only drawback is that its rapid pace and cacophony of characters requires quite some effort to keep up with.

The movie begins like a slammed door farce as Aurenche prepares his hotel for the arrival of his mistress, actress Suzanne Raymond (Charlotte Kady, "L.627"). When the British begin to bomb the local Renault factory, Jean A. continues his lovemaking while Jean Devaivre hurries through the streets to attend to wife and child. Devaivre's sound crew take the opportunity to retrieve the fish the air raid has brought to the surface of a local lake.

The AD sends his family to the country and makes films under threats of being sent to Babelsberg (the famous Berlin studio) while his director frets over the arrest of his wife. In his spare time, Devaivre bombs German trains, parachutes from British planes and rides his bicycle 380 kilometers to visit Simone. Aurenche moves in with the youthful but worldly Olga (Marie Gillain, "Le Bossu") in the brothel where she works as he tries to decide between Suzanne and her wardrobe assistant Reine (Maria Pitarresi, "It All Starts Today") He ducks the pleas of Continental head Doctor Greven (Christian Berkel, "Das Experiment") for scripts as he incorporates daily observations into his next.

With "Safe Conduct," Tavernier brings to life a period of French filmmaking that had a unique set of challenges (to say the least). Forced to film with short ends on cramped sound stages under the watchful eyes of the invader, these artists and craftsmen carried on with an ingenuity that stretched their abilities. Constant often comical references to food and the power wielded by the purveyors of black market goods underline the basic human needs that were often left wanting as these people toiled on. The grim circumstances of life in the city are made more apparent by the idyll that is the country and Tavernier slows his pace to make the transition with a beautifully shot sequence of Devaivre bicycling along rural lanes. Director of Photography Alain Choquart's fluid ("It All Starts Today") work is put to the test within Continental and his camera swoops smoothly amidst crowded equipment and pockets of people.

Tavernier's affection for his fellow Frenchmen and filmmakers of the 1940s shines throughout "Safe Conduct." It's an engaging testament to the creative spirit.

Jean Aurenche (Denis Podalydes) is a screenwriter and lady's man, constantly juggling four or more scripts and his three beautiful mistresses. He has steadfastly found excuses to refuse to work for Continental and his passive resistance to the occupiers is found in his writing.

The lives of these two very different men are the focal points of "Safe Conduct" but the grand sweep of the film covers much more. Tavernier brings us into the French film industry at its darkest, most turbulent times. The onerous demands by the Nazis have left Paris virtually silent. There is no petrol, thus no cars, except for he occasional German vehicle. Food is always in short supply and, as one lady puts it - the war makes it cold in June.

Tavernier and co-scripter Jean Cosmos take the stories of real life French filmmakers and examine the concept of collaboration as a means to survive. But, "Safe Conduct" also deals with how people accept the pay of their overlords while, at the same time, subverting their masters whenever they can. The filmmakers in Boulogne, the heart of the Paris film industry, do their best to not pass on the messages of Nazi propaganda and do so under the very nose of their fascist-controlled boss Dr. Albert Greven (Christian Berkel) and his German keeper, Spaak (Laurent Schilling).

"Safe Conduct" is a sweeping epic of a film that paints a complex picture of the French film business under the Nazis, touching upon many social and political confrontations in both heart and mind. Issues such as survival and freedom examined under the context of war and occupation are given close scrutiny. This is not a movie about justification but of dignity, personified by the two Jeans and the many people around them. They are working for France and not for the Germans and do whatever they can to sabotage the Germans. This is nicely depicted in an extended sequence when Devaivre, suffering from a raging cold, steals confidential German records, is spirited off to England to be debriefed, flies back to France but is forced to parachute into the country. If that isn't enough, he must bicycle (remember, no cars) 380 kilometers back to Paris to be in time for work.

The film is also about pride in your craft and this works both in front of the camera and behind. "Safe Conduct" shows the dedication of the filmmakers to their chosen business and the gratification in creating a work of art in light and shadow. This pride extends to Tavernier and his accomplished crew who imbue the same craftsmanship in the making of this epic tale. There is an old-fashioned quality about the film that harkens back to the time it is telling about, giving the film an elegant quality. The fluid, constantly moving camerawork by Alaine Chouart gives the film a great deal of its energetic appeal. Other production values are of equally high quality.

The talented and huge cast of characters - there are 139 speaking roles - help to give "Safe Conduct" the depth and dimension one would expect in such a deft craftwork. Both Jacques Gamblin and Denis Podalydes are convincing as the two Jeans. Podalydes is outrageously "French" as he openly and lovingly juggles his mistresses, even crying on one's shoulder about his woes with the other two. Gamblin fits the bill in his physically demanding role as Resistance fighting Devaivre. The rest of the fine cast help to give dimension and shading to every performance.

"Safe Conduct" takes you places that have not been explored to this level before (although some may point to Francois Truffaut's "The Last Metro"). It is a long movie at 163 minutes but it fills the time with drama, romance, tragedy, bravery, political intrigue, partisans and sabotage. Viva le Resistance!