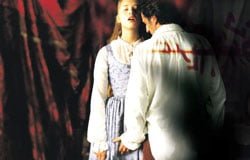 In 1794, the French Revolution is raging and the Marquis de Sade (Daniel Auteuil, "The Closet") once again finds himself imprisoned because of his scandalous literary works. This time, his mistress Sensible (Marianne Denicourt, "Me Without You") has paved his way to the relative freedom of Picpus and its luxury for hire by taking up with Fournier (Gregoire Colin, "Beau Travail"), a Robespierre (Scali Delpeyrat) follower. There de Sade is intrigued by an innocent with a lively intellect, Emilie de Lancris (Isild Le Besco, "Girls Can't Swim"), who is drawn to the libertine like a moth to a flame in Benoit Jacquot's ("The School of Flesh") "Sade."

Featuring a dangerously seductive performance from the great Daniel Auteuil, "Sade" covers the same period as Kaufmann's "Quills" with more unsettlingly realistic results. This is the down and dirty telling, much like the French "The Return of Martin Guerre" as compared to its American remake "Sommersby."

The decorum begins to break when Parisians complaints about the smell of death result in the guillotine's move to Picpus' gardens where a trench is dug to hold its victims. The two-faced Viscount's affair with Madame Santero (Jeanne Balibar, "Va Savoir") becomes obvious, the Chevalier (Vincent Branchet) conducts an openly homosexual lifestyle and De Sade engages the populace for theatrical tableaux. Finally, the face of mortality drives virginal Emilie to De Sade for the conclusion of her education.

Jacquot's film, however, is an uneven affair. The adapted screenplay by Jacques Fieschi and Bernard Minoret begins by introducing all its characters in a confusing jumble. None of the supporting players are able to flesh out their characters. Sensibile, blandly portrayed by Denicourt, is a victim of brutish treatment at the hands of Fournier, for which she's treated with disdain by De Sade. Colin's jealous Fournier inexplicably continues to allow her to support his nemesis.

Benoit Delhomme's ("What Time Is It There?") photography ranges from brilliantly framed and lit scenes, such as the over the shoulder shots building De Sade and Emilie's scenes like a dance, to clumsily handled zoom shots. The film begins in murk with pale faces floating against utter blackness and ends in ordinary daylight, perhaps to suggest Emilie's illumination. Music is kept to a minimum, with harpsichord strains heard at beginning and end, but sound is used provocatively with the buzzing of a fly suggesting decay and decadence, or perhaps the entrapment of Emilie in De Sade's web.

By the time of his death in 1814, the Marquis de Sade had spent a third of his life in prison and produced some of the most forward thinking and bawdy satires of his age with such scandalous works as Justine, or The Misfortunes of Virtue and The Crimes of Love. Director Benoit Jacquot selected a particular time in the life of the aristocrat and author, a time that was the cusp in the marquis's years where he had physically done it all but intellectually was just getting rolling in "Sade."

It's nigh on impossible not to compare Jacquot's work, penned by veteran scripter Jacques Fieschi and Bernard Minoret, to the finely crafted and acted "Quills" with Geoffrey Rush and Kate Winslet. That film also deals with a period of Sade's later years but from a different, more intimate viewpoint. Not that there isn't a bit of sexual titillation in "Sade," but it lacks the straightforward writing and strong performances of the earlier movie. This current tale isn't bad and it certainly has two fine performances by Daniel Auteil as the title character and Isild Le Besco as Emilie, the pretty teen that 50-year old Sade took under his wing, but there are problems.

The story begins with the aristocrat in prison at Saint-Lazare for being a political agitator, libertine, atheist and "a highly immoral man." But, luck and his fortune are with him and Sade is transferred to a new jail, the convert-turned-prison-hospital, Picpus, where the wealthy inmates can buy life's little luxuries through the cooperative prison officials. It is here that Sade meets the Viscount and Madame de Lancris (Jean Pierre Cassel and Dominique Reymond) and their daughter Emilie and the notorious marquis seems to set his cap for the pretty, intelligent young woman. There is more, though, to the relationship as Sade convinces her to become his secretary and proceeds to awaken her intellectually and, particular, sexually, but not in a way you would think.

If the study concentrated on this complicated, intriguing relationship I may have liked "Sade" a bit more. There are other stories and statements being made dealing with the oppression and distortion of the values of the Revolution, the conservatism and violence of the Terror (think of Madame Defarge knitting as heads roll) and the sly matchmaking skills of the marquis. The historical touches, like the rise of Robespierre who outlawed atheism and declared that God and the immortal soul are the law of the land, make you laugh at the absurdity and chill at the reality. Another not so historical but typically French incident, straight out of a Monty Python sketch, has an imprisoned aristocrat sitting at dinner in his cell complaining about the vintage of the wine. The scene was a distraction but funny in its stereotype.

The scope of the events of the tumultuous period in French history, were Madame Guillotine dropped her blade indiscriminately, is sharply contrasted with the subtle relationship between Sade and Emilie. Other personal stories are less compellingly handled, like the sidebar of Sensible (Marianne Denicourt), Sade's dedicated mistress who would do anything for the libertine, including suffering beatings and humiliation from Picpus warder Fournier (Gregoire Colin). Another plot line has the satirist getting permission to put on a play - his kind of play that is (wink, wink) - only to have the warden restrict it to be without dialog. Then the guillotine is brought onto the grounds of the prison hospital and the executions change paradise to purgatory. There are too many things going on in "Sade" for its hundred minute run time.

The techs are adequate with the dark, murky photography a distraction (but that may have been a problem with the particular print I watched). The reason to see "Sade" lay with the chemistry and complex relationship between the marquis and Emilie.