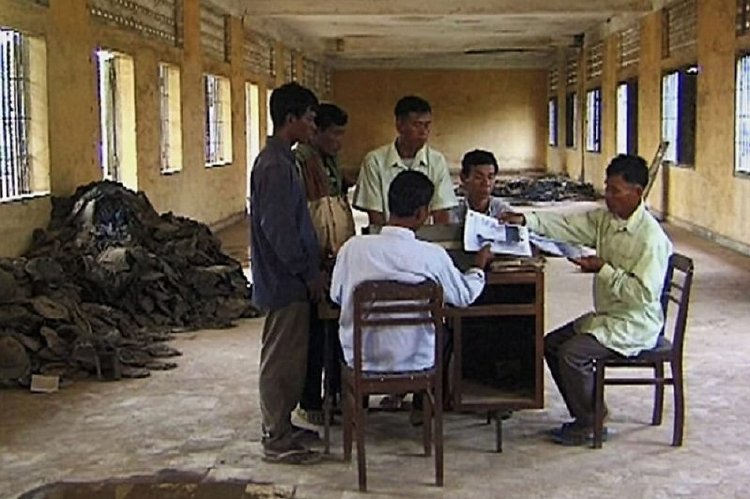 During the four-year reign of terror from 1975 to ‘79 by the Khmer Rouge government in Cambodia an estimated 1.7 million of that country’s citizens were murdered, starved or worked to death. The Security Bureau of the Khmer Rouge was a microcosm of this suffering as they arrested, tortured and executed 17000 internees with only three surviving, today, from their ordeal in the detention center called “S21: The Khmer Rouge Killing Machine.”

This documentary by Cambodian-Canadian filmmaker Rithy Panh starts of slowly and, at first, appears to be material better suited for a 60-minute PBS program about the Cambodian version of the Holocaust story. But, as the intent of Panh’s work subtly shifts the perspective of his telling of those horrendous times takes on a unique, intriguing edge.

Initially, you get some statistics, but not enough, about the suffering the Khmer Rouge inflicted on that small country of 7 million in just a few short years trying to establish their ultra-leftist agrarian nation. The advent of the notorious S21 center is introduced and, of the thousands interned, tortured and executed there, only three survive to tell about the ordeal. Few in number, too, are the former jailers willing to speak to the camera and explain their side of what transpired in the troubled country.

The reflections and remembrances of the survivors are vividly assisted by the artistic work of one, Vann Nath, who survived S21 because he could paint and his jailers liked his work. The torment, suffering and dehumanization the inmates were subjected to is shown in his deeply moving and disturbing paintings, especially as he describes the daily abuse and death he watched unfold.

Conversely, the jailers take the familiar “I was only following orders” stance that the makers of genocide use like a crutch to explain their heinous misdeeds. Then, we learn that these “jailers” were as young as 12-years old and thrust into a job that required them to shed their budding humanity. Panh does not whitewash the atrocities committed by the wardens of S21 but he gives a three-dimensional picture of the psychological impact suffered on both sides of the cell door.

Much of the film was shot at the facility that housed the S21 detention center, now turned into a genocide memorial, and is used effectively. In one sequence, one of the jailers reenacts his ritual of coercion of the prisoners as he yells and threatens to punish an inmate whose only crime was turning in his sleep. The scene is so well depicted and shot that your mind’s eye fills the empty cell with the suffering bodies of the internees.

As the film progress Panh fills in more of the details of this period of modern Cambodian history and he makes the case for further prosecution by the world court to bring the perpetrators of the genocide to justice. “S21: The Khmer Rouge Killing Machine” makes an articulate and cogent argument that should be seen and heard.