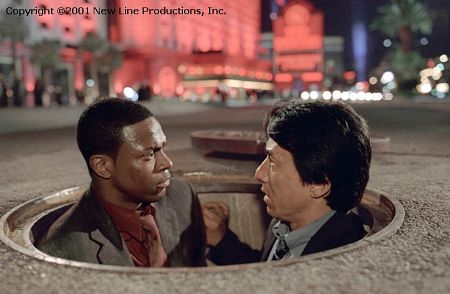 In 1998, director Brett Ratner and his stars, Jackie Chan and Chris Tucker, breathed new life into the buddy-action film genre with the cross-cultural "Rush Hour" - to the tune of about $250 million. You don't mess with success, so the team is back again, and better, in "Rush Hour 2."

"Rush Hour 2" is one of those rare sequels that surpasses the original. While breaking no original or artistic ground, the problems with the first effort (over-emphasis on an unexciting plot and an imbalance between the two leads) have been fixed.

Chan and Tucker's non-PC repartee has been criticized for its reliance on racial jokes, but its delivered with no ill will ('In Hong Kong, I'm Michael Jackson and you're Toto' Chan garbles. Later, presented with a bevy of Asian beauties Tucker advises 'Never get in front of a black man in a buffet line.' Tucker's case-cracking advice to always 'follow the rich white man' proves worth heeding in this film as well.).

Chan delivers his amazing stunts with his appealing charm yet again, but this time Tucker holds his end up whether performing a hilarious karaoke rendition of 'Don't Stop Til You Get Enough' or getting directions from a non-English speaking chicken vendor. Tucker's climatic choreographed fight with Zhang Ziyi is a comedic ballet, while Chan's given a potential love interest (and plot mechanism for part 3) in Sandra Bullock lookalike Sanchez. Jeremy Piven is amusing as a flamboyantly gay Versace salesman and an uncredited Don Cheadle ("Swordfish") plays straight man to Chan and Tucker as a Chinese restaurateur/martial artist.

"Rush Hour 2" is the first commercial summer movie that's actually entertaining. Make sure to stay for Jackie Chan's habitual end credit outtakes and you should leave the theater with a smile on your face.

The combo of the terrific physical talents of Chan and the non-stop motor mouth of Tucker made for an ethnically unusual duet in "Rush Hour" that played well to audiences around the world. The formula worked so well, in fact, that the sequel was inevitable. I'm never thrilled with the idea of a follow-up to a successful original since they rarely meet the previously set expectations. Surprisingly, "Rush Hour 2" wastes no time getting down to business and turns out to be better than the flick that spawned it.

The script, by Jeff Nathanson (utilizing the characters developed by Ross LaManna in the first film), wastes no time getting to the point right from the start. Terrorists have bombed the US embassy in Hong Kong, killing two American translators, and Chief Inspector Lee (Jackie Chan) is handed the job of solving the crime. Concurrently, his friend James Carter (Chris Tucker) arrives on the island for some much needed R&R and expects his friend to spend some time and show him the sights. Instead, Lee drags Carter into the case and the duo get involved in stopping a conspiracy to counterfeit hundreds of million of US dollars.

The makers of "Rush Hour 2" are working at a distinct advantage over the original. We, the viewer, are familiar with the two lead characters and the already-existing chemistry that Chan and Tucker developed so well the first time around. That chemistry was a high point (and probably the saving point) before and, now, the pair wears their friendship like a comfortable suit. Little time is wasted in getting to know the key players so the screenplay capitalizes on those things we liked best in "Rush Hour."

First and foremost to me, in "RH2," is the immense pleasure in watching Jackie Chan's artistry in fight choreography. The 47-year old martial arts master has a renowned reputation for doing all of his own stunt work and, here, he does not disappoint. Chan's use of props when battling bad guys continues as he pulverizes his opponents with whatever item comes to hand, such as a trash bucket. His moves look every bit as good as they ever did as he fights four or five nemesis at once on bamboo scaffolding, on the tail end of a yacht, in a Hong Kong massage parlor and, for the finale, in a Las Vegas casino. Like Harold Lloyd or Buster Keaton, Chan takes pride in putting his physical self on the line in pursuit of his artistry and is a joy to watch.

Chris Tucker reprises his role as the motor mouthed LA cop, Carter, who teams, again, with Lee to put down the bad guys. When he is unceremoniously pulled from his vacation to help his colleague and friend with the big case, he still looks to have some fun. When Lee goes into a karaoke bar, the lair of chief bad guy Ricky Tan (John Lone) and his hoods, Carter takes the spotlight on stage with a credible Michael Jackson riff. The comedian made the move from the improv stage to the big screen and, with Jackie Chan, has a franchise to hang his coat on to pay the bills. The combo of Chan's flying feet and fists with Tucker's fast mouth make a duet more endearing than Riggs and Murtaugh in the "Lethal Weapon" films.

The supporting cast is here to move things along efficiently. John Lone, as Ricky Tan, is a suave villain who is the real power behind the throne of American bigwig Steven Reign (Alan King in a walk through performance). Lone doesn't chew scenery or make pronouncements to "get Lee and Carter," but gives the chief bad guy elegance. Zhang Zi-Yi ("Crouching Tiger, Hidden Dragon") continues to display her martial arts skills as Ricky's taciturn henchlady, Hu Li, who carries on an ongoing battle with Carter. (Carter has a problem, through most of the film, with hitting a woman, but this falls aside with their eventual one-on-one melee at the conclusion.) Roselyn Sanchez is knockdown gorgeous (and resembles Sandra Bullock) as undercover agent Isabella Molina - she doesn't add much to the equation but is terrific to watch.

Director Ratner and the original "Rush Hour" production team have assembled a crew of skilled craftsmen to work behind the camera. Cinematographer Matthew F. Leonetti has had a long career of shooting action flicks and gives "RH2" the fluid camera movement the genre film needs. Production design by Terrence Marsh spans continents and gives the right look, whether it is in a Hong Kong karaoke bar or a high stakes Las Vegas casino. The rest of the techs are of the same high quality.

I'm surprised to even say that "Rush Hour 2" is the most entertaining of the summer blockbuster movies. It takes the best of the first film and kicks Jurassic dino butt in its fun, frolic and fast pace and is the best mainstream thing out, so far, this summer.