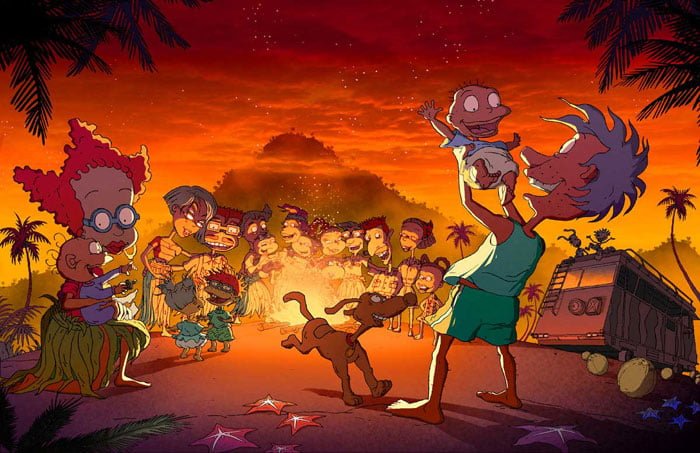 The Nickelodeon entertainment empire has dominated much of children's television for years and has proven itself a notable force in kid-oriented feature length animations. The TV show "The Rugrats" is tremendously popular and translated to hefty profits in theaters with the animated features "The Rugrats Movie" and "Rugrats in Paris: The Movie." Nearly as successful, "The Thornberrys" TV show made the transition to the big screen with the wonderfully entertaining and satisfying "The Wild Thornberrys Movie." So, what would happen if you jammed these two popular shows together into a feature length animated adventure? The answer is: "Rugrats Go Wild."

Stu Pickles (Jack Riley, "Rugrats in Paris") delights his family and friends with tickets to a cruise but when the Lipschitz sails without them, the Pickles, DeVilles, Finsters and Susie Carmichael (Cree Summer, "Rugrats in Paris") are dismayed to see Stu captaining an old tugboat. Out at sea, a forty foot wave smashes their boat and the group end up shipwrecked on a deserted island. Tommy Pickles (Elizabeth Daily, "The Powerpuff Girls Movie") believes that his hero, TV naturalist Nigel 'Strawberry,' (Tim Curry, "The Wild Thornberrys") will save them, so he leads his buddies into the jungle where "Rugrats Go Wild!"

Paramount Pictures and Nickelodeon throw together their two popular family toon groups and come up with a decidedly mixed bag. "Rugrats Go Wild!" is engaging during its setup, but once the Thornberrys, so charmingly featured in their own movie last year, get in on the action, the story goes limp with triple-threaded rescue yarns studded with uninspired musical sequences. Still, the richly colorful animation, familiar characters and Odorama gimmick should be appreciated by the kids.

Screenwriter Kate Boutilier, who did a terrific job bringing the Thornberrys to the screen the first time, does them a disservice this time around. Tommy and his gang are amusing until they run into Nigel, who promptly suffers a blow to the head that makes him regress to the age of three, a lame idea that produces no entertainment value (no fault of Curry's, who brings his eccentric warmth to the character once again). Nasty Angelica (Cheryl Chase, "Rugrats in Paris"), great fun singing karaoke with her Cynthia doll and terrorizing the younger kinds, is given a blah subplot that pairs her off with Debbie Thornberry (Danielle Harris, "The Wild Thornberrys") to be bossy and crash vehicles together. Spike, given voice here by Bruce Willis due to the presence of animal talking Eliza Thornberry (Lacey Chabert, "The Wild Thornberrys"), sets off to save his babies and has an amusing run in with the 'big cat' (LL Cool J, "Deliver Us From Eva") being tracked with Nigel, but Eliza and Darwin are almost ignored. Chuckie Finster's (Bart Simpson voicer Nancy Cartwright) encounter with Donnie Thornberry (Flea, "The Wild Thornberrys") is also uninspired. The most consistently amusing thread concerns rugrat Lil DeVille's (Kath Soucie, "Piglet's Big Movie") determination to stop her and twin Phil's bug eating habits after witnessing a rainforest lizard devour a fly.

Considering that the filmmakers revived a marketing stunt introduced by cult independent John Waters and feature soundtrack titles from the likes of The Clash, The Police and Iggy Pop, adult-aimed jokes dry up fairly quickly. There are chuckle-inducing references to "Jaws," "The Poseidon Adventure" and "Taxi Driver" with musical themes cribbed from "Gilligan's Island" and "Titanic," but all are early in the flick. Animation is sumptuous, particularly in the rendering of the sea.

My first exposure to either of these successful kids' TV programs and their theatrical spawn was with the terrifically entertaining and educational "Thornberrys" movie. I was impressed by the intelligence and sophistication of the story and humor (which is, also, often slapstick). Besides, it is the first film to be endorsed by the World Wildlife Foundation for its able handling of environmental issues in a way that kids will readily understand. My experience with the "Rugrats" is nearly non-existent but I figured, what the heck, I like "The Wild Thornberrys Movie" so much, I'll take a look at what the Nick folks do to bring these two forces together.

"Rugrats Go Wild" starts out with a fantasy adventure as diaper-clad Chuckie (voice of Nancy Cartwright) imagines himself to be his hero, wildlife authority and TV star Nigel Thornberry (voice of Tim Curry), in another exciting hunt to capture elusive wildlife on video tape for the world to see. Chuckie's reverie is interrupted and we learn that all the Rugrat families are assembling to go on a South Pacific cruise together. Everyone is shocked when they find out that they aren't booked on a huge luxury liner but onto the tiny boat hired by the group's inventor Stu Pickles (Jack Riley). The little boat makes the S.S. Minnow of "Gilligan's Island" look sumptuousness in comparison.

It wouldn't be an adventure film if something didn't go wrong and in "Rugrats Go Wild" thing go very badly indeed. Stormy seas and natural disaster strike and the boat sinks to Davy Jones's locker, stranding the families on a raft until they land on a deserted tropical island. But, the island is not all that deserted when we learn that the globetrotting Thornberry family is there, too, in search of the elusive clouded leopard. The opposite-ends-of-the-spectrum families are thrust together to brave the deserted island's dangers, including the hungry leopard Siri who would love to sink her teeth into a tasty child. The Rugrats families and the Thornberrys must join forces and put their strength, ingenuity and intellect to the task of saving them all (and maybe getting another exciting show for the Thornberrys).

The Nickelodeon folk have created a hybrid film that tries to combine the best of their two popular worlds but, instead, come up with a mishmash that will entertain its diminutive target audience but lacks the smarts of "The Wild Thornberry Movie." It won't not garner the adult audience interest needed to sustain it at the theaters, despite the fact that there are many film references that the kids won't get but the parents should. "Titanic," "Gilligan's Island," "Jaws," "The Poseidon Adventure," "The Swiss Family Robinson" and other flicks are referenced but it is really a meager attempt to draw us elders in. The kids will like it but leave this one to home video.