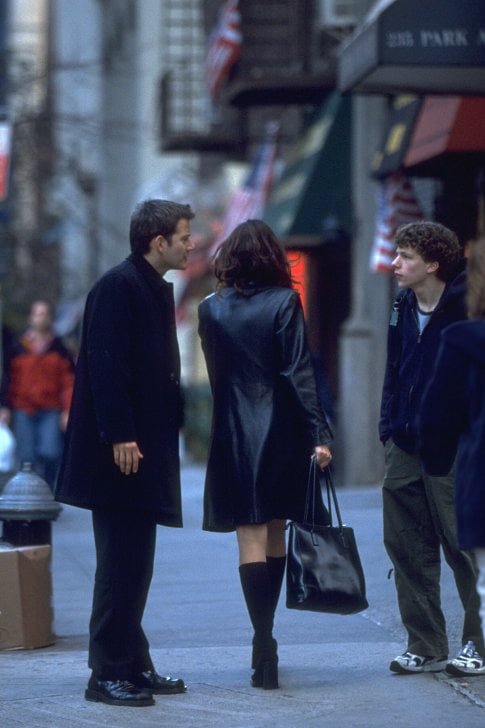 Roger Swanson (Campbell Scott) is a fast-talking adman in New York City who works to play. At night he bounces from party to party always on the lookout to score with the ladies. One day, his 17-year old nephew, Nick (Jessie Eisenberg), arrives on his doorstep obviously in awe of his infamous uncle (the "lady's man" as Roger's sister/Nick's mom disparagingly calls him). The boy begs his older, wiser idol to show him the ropes in seduction and sex and Roger reluctantly agrees. It becomes an evening that will change them both in "Roger Dodger."

Ad exec Roger (Campbell Scott) delights his coworkers and boss and secret lover Joyce (Isabella Rossellini) with his witty rationale on why women will take over the world during a boozy bistro session, but a later visit to Joyce's apartment reveals a desperate neediness beneath the bravado. Roger can't accept Joyce's termination of the relationship and it begins to endanger his career. Just as he hangs on the precipice, his 16 year old nephew (Jesse Eisenberg) arrives unexpectedly, looking for life lessons from the infamous ladies' man in tyro writer/director Dylan Kidd's "Roger Dodger."

This terrific American independent character study arrives adorned with three awards, including the Luigi De Laurentiis award for first film, from the Venice Film Festival where it played in the Critics' Sidebar. Dylan Kidd's fortuitous choice of a leading man who is a writer/director in his own right makes for a collaboration that results in a sure-footed, stylish debut.

Campbell's hyper manic depressive delivery is perfect for the pitchman who's so used to 'making people feel bad about themselves in order to sell them what they need' that he doesn't see the devastation he leaves in his wake. While his wit does indeed lure women, he can't stop his ability to truthfully size up any situation from wounding them. Scott keeps Roger from being totally repulsive with the confoundment and rage he feels in his own hollow, if wickedly entertaining, existence. Nick, the son of Roger's estranged sister, gives him the opportunity to feel good parading his worldly outer shell about.

Jesse Eisenberg, brother of Hallie, makes a fine debut as the eager to learn kid who is too decent and sensitive to follow through with his uncle's misogynistic ways, no matter how cool he initially believes the guy to be. This is beautifully played out as Nick successfully interests the much older Andrea (Elizabeth Berkeley, "Showgirls") in a club, then gets a kiss from her friend Sophie (Jennifer Beals), charmed by the boy but turned off by Roger. Roger uses Nick to crash a party at Joyce's where he tries to convince the kid to lose his virginity with a drunk coworker, then awakens from an alcoholic blackout to a frantic phone call from his sister.

"Roger Dodger" is drenched in New York City, from its cynical antihero in the city's most identifiable profession to the bustling streets and neighborhoods that encompass the seediest sex clubs to chic modern apartments guarded by suspicious doormen. Cinematographer Joaquin Baca-Asay ("Super Troopers") and editor Andy Keir ("Final") favor closeups balanced by long shots of busy city streets and achieve an urgent, jangly feel with kinetic cutting of handheld camerawork.

Kidd gets terrific acting (Isabella Rossellini, Jennifer Beals and Elizabeth Berkeley all make significant contributions), from his ensemble cast working from his razor sharp script (Kidd credits Scott for his dialogue and editing contributions) which only errs with an ending that's a little too cute and out of Roger's element. Kidd and Scott have created one of the year's most memorable characters.

Massachusetts-born screenwriter/director Dylan Kidd has hit the pavement with both feet running in his debut effort. Working closely with his star, Campbell Scott, they develop a character study of a man steeped in his hedonistic lifestyle of voyeurism, self-indulgence, booze and, especially, women. He has been having a sexual fling with his boss, Joyce (Isabella Rossellini) but she has had about enough of the vain, outspoken and caustic Roger. Then, Nick lands.

Roger's nephew is the other member of the Roger Swanson fan club (Roger being its president) and talks his notorious uncle into teaching him about the ways of women. It becomes Nick's journey into manhood as Roger slips the under-aged boy into one of his watering holes where they meet Sophie (Jennifer Beals) and Andrea (Elizabeth Berkley), a pair of over-thirty babes who are smart, sexy and savvy to Roger's bull**** patter. But, to them, a sensitive, attentive, good-looking 17-year old virgin is both extremely sexy and very hot. Nick gets a chaste, but extremely erotic, lesson from the ladies with Sophie laying on the willing, bewildered teen his first kiss - and it's a doozie. It's just to get him "through his junior year" as the pair of lookers depart but are loath to leave the impressionable Nick in the hands of his misogynistic uncle.

>From here Roger takes him on a tour the city, first crashing Joyce's party and trying to set up Nick with a pretty, drunk coworker. When Roger takes the boy to a brothel to fulfill his promise to get Nick a little nookie we come to know both men and what they are made of. This bonding and growing experienced by Roger and Nick, in a short time, changes both, though Nick influence Roger more, rather than vice versa. Couple this coming-of-age tale with the brilliantly written dialog, the matching delivery of such by Scott and the sure hand by tyro helmer Kidd and you have an intelligent, witty, mildly bawdy film that is a pleasure to watch. Add, as a further bonus, a first-rate supporting cast Eisenberg and all of the ladies and you get something nice and special.

Campbell Scott is award worthy in his portrayal of Roger. The fast and furious monologues that the ad master reps some of the wittiest word-smithing since Eugene O'Neil. Scott gives a wonderfully sleazy perf as the well-educated and totally self-absorbed Roger. When he agrees to teach Nick the meaning of life you want to shout "NO!" to protect the boy from this questionable influence. Fortunately, Jessie Eisenberg epitomizes the naivety and innocence of Nick as an impressionable but also intelligent, kind and caring teenager who benefits from his brief lessons in life with Roger, sometimes despite his uncle. The ladies supporting the macho leads are nothing less that terrific. Rossellini, in a small but effective role as Joyce, is more than a match for Roger. Berkeley and Beals are both sexy and caring as they teach Nick some real facts of life.

The techs are straightforward and capable with lenser Joaquin Baca-Asay giving the handheld camera work a jerky, hyper feel as it follows Roger and Nick on their journey to enlightenment. Sets and costume reflect the hip, upwardly mobile world in which Roger lives.

Dylan Kidd creates, with the capable help of his cast and crew, a terrific debut with the smart, funny and upbeat "Roger Dodger."