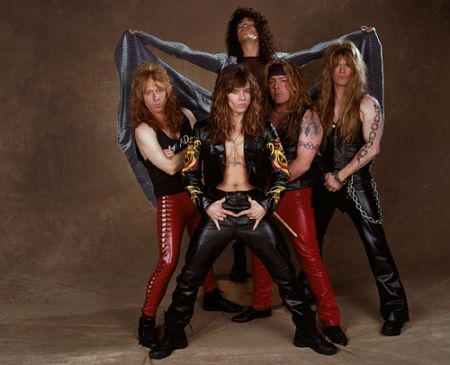 Chris Coles (Mark Wahlberg, "Planet of the Apes") and his manager/girlfriend Emily (Jennifer Anniston) lead Blood Pollution, a tribute band honoring metal rockers Steel Dragon. Chris is a perfectionist, though, who stifles his bandmates' yearnings to create original material. They throw him out just as Steel Dragon is ridding themselves of lead Bobby Beers (Jason Flemyng, "Snatch"). Songwriter/guitarist Kirk Cuddy (Dominic West, "28 Days") sees a homemade video of Blood Pollution, gives Chris a call, and the starstruck singer is on his way to becoming a "Rock Star."

Although "Rock Star" is rumored to have begun life as the true story of how Judas Priest replaced a band member, as written by John Stockwell (TV's "Cheaters" and "Breast Men") it's devolved into a series of cliches. Mark Wahlberg gives an engaging central performance, however, unlike his charmless turn in "Planet of the Apes," keeping the movie marginally entertaining.

The film begins by establishing Coles' obsession and devotion to Steel Dragon. He's a good kid with a junkbox car, a job fixing copiers, supportive parents (also fans of the band) and an older cop brother (Matthew Glave, "The Wedding Singer") he fights with constantly. When his best friend and guitarist (Timothy Olyphant, "The Broken Hearts Club") adds a solo during a Blood Pollution gig, Chris tells him to stick to the music as recorded and the two scuffle as they obviously have many times before. Band over.

The very next day (a true 'only in the movies' moment) that phone call comes and Chris is whisked off to a West Coast audition, offered the job, renamed Izzy, and thrust into a press conference sporting an English accent. Trouble immediately looms after their first big gig, a huge success where Chris falls down the stage stairs, but continues belting out tunes with blood streaming down his face. The drugs, alcohol and women (including one women who only appears that way) which follow give Chris and Emily their first taste of rock 'n roll decadence. Then band manager Mats (Timothy Spall, "Love's Labours Lost") informs Chris that no women are allowed on the tour bus, Emily must ride with 'the wives.' The couple is eventually driven apart until the whole thing comes full circle with 'Izzy' finding himself in the same position he had put his Blood Pollution best buddy in.

The cliches come fast and furious with artificial hotel room trashings, groupies galore and the final realization that what the heart desires most can be found in your own back yard. Cole's new found soulfulness is visualized by making him look like Kurt Cobain. Director Herek ("Mr. Holland's Opus") does give a taste of corporate rock though, and keeps things moving along. The music sounds authentic enough to a non-metal fan like myself (the cast includes Jeff Pilson of Dokken, Zakk Wyllde of Black Label Society, Blas Elias of Slaughter, Brian Vander Ark of The Verve Pipe and Stephan Jenkins of Third Eye Blind).

Wahlberg looks the part and remains sympathetic throughout, even as he's being led astray. Solid support comes from Dominic West as the controlling Cuddy (looking like Mickey Dolenz in a King Charles wig) and the always dependable Timothy Spall as the 'there but for the grace of God' Mats. Jennifer Anniston is sincere and cute, but just too old for the part she's cast in.

Director Stephen Herek made a name for himself with his 1995 Oscar-nominated flick, "Mr. Holland's Opus," a story about one man's mission to convey his love of classical music to his students. Now, the helmer does a 180-degree turnaround and takes on heavy metal music and the ravages of stardom as his subject in "Rock Star."

"Rock Star" is a modern rock and roll fantasy that follows an ambitious young musician, Chris Cole (Mark Wahlberg), who heads an amateur band that tributes (not covers) their favorite group, Steel Dragons. Chris is happy to duplicate his idols' music, but there is dissention in his band's ranks when the other members demand that they take on their own personality and not that of Chris's beloved hard rock band. The young musician is rudely forced out of the band that he began.

When he gets a fortuitous phone call from the leader of Steel Dragons, Kirk Cuddy (Dominic West), Chris is invited to audition for the band's lead singer spot when the former lead, Bobby Beers (Jason Flemyng), is fired. In typical Hollywood fashion, the unknown crooner is immediately hired and his career skyrockets. He takes the stage name of Izzy and is, right off the bat, a big hit. He and his manager/girlfriend Emily (Jennifer Anniston) head on tour with the Dragons, but the price of fame is high and the couple soon learn that the glam life is not all that it seems. Emily opts to go back to her own world and Chris immerses himself in the perks of stardom.

"Your job is to live the fantasy that other people dream about" is the advice Izzy, nee Chris, is given by Steel Dragons' road manager, Mats (Timothy Spall). This is part and parcel of the larger-than-life nature of "Rock Star" as it chronicles the meteoric rise and not-such-a-hard fall of the film's central character. Basically, the statement made is that the stars that make the music for their young auds must live the hedonistic lifestyle of sex and drugs (and rock 'n' roll). Chris, initially, falls for this "good" life but realizes that the price may be too high to pay in the long run. Too much of a good thing turns into way too much of a good thing.

Mark Wahlberg is personable as the rock star wannabe and maintains his innocence through his rise from unknown club singer to teen idol. His character, Chris, is a bit too goody two shoes, but, then again, that's the impression the actor gives throughout the film, even when Izzy hits bottom on the hedonism scale. Jennifer Anniston is a very pretty lady but doesn't give any real depth to her character, Emily, and seems too old for the role The rock band members are real musicians but, since heavy metal is not my kind of music, I recognize few names and faces. The always-versatile Timothy Spall ("Topsy-Turvy") does a fair turn as the road manager who has seen it all and, by his own admission, lost a lot. He is Chris's muse who unwittingly opens the younger man's eye to the true cost of fame.

Techs, from direction by Stephen Herek to staging of the rock concerts, are handled ably and keep things moving along briskly. The music, by Trevor Rabin, hits the right note (pun intended) of the 80's heavy metal scene, but, truth be told, I have never been a fan, so it is not fair for me to judge. I'd be interested to get the opinion of that music's devotees to see what they think.

My main problem with "Rock Star" is the leap of faith required to believe that Chris would be hired to front a major rock band with little more than a how-do-you-do. It would be like the members of Aerosmith suddenly dumping Steve Tyler and hiring an unknown replacement without so much as a hiccup in their popularity. What if the Beatles dumped Ringo? I just don't believe it.