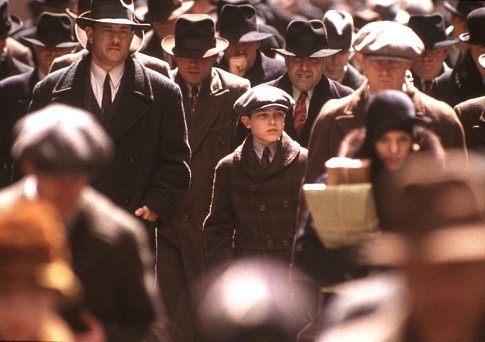 Michael Sullivan (Tom Hanks) is a hit man for the Irish mob in Depression-era Chicago. His son, Michael Jr. (Tyler Hoechlin), wants nothing more than to earn his father's favor. But Michael Sr. does not want his only remaining child to take the same road in life that he did. He does not want his boy to take the "Road to Perdition."

Sophomore helmer wunderkind Sam Mendes made an impressive debut with his Oscar-winning first effort, "American Beauty." Interest has been high in anticipation of his next work and the director has selected the graphic novel of the title as his subject. And, this is why, I think, that "Road to Perdition" is a very good film but not a great one. The subject matter, while providing a visually stunning look to the movie, does not propel the story beyond the routine. Script scribe David Self was given the task of fleshing out the source material into a feature length film with complex characters. But, it's a different task to build the characters and dialog beyond the their graphic novel dimensions than it is to adapt, say, a complex source work like The Godfather.

If you strip away the wealth of acting talent called upon to breathe life into the characters that populate "Road to Perdition" you'll find that they are more symbol than real people. Michael Sullivan is a mob hit man and, at the same time, a loving husband and father who really believes that, at the end of the day if he puts the tools of his violent trade away in a cupboard, his life will be normal. This assassin with a heart is, from the start of the film, a tragic figure whose end is inevitable. Tom Hanks puts a human face on the clichéd character of Michael and gives the character dimension with a look of the eye or a facial change. Hanks has minimal dialog but the talented actor makes the most of it. The same goes for the rest of this incredibly capable cast.

Paul Newman is terrific (who would expect anything less?) as mob boss John Rooney, the man who practically raised Michael and treats the man more like a son than an employee. He does, however, distinguish between his loyalty to Michael and his responsibility to support his real son Connor (Daniel Craig). Blood, for the senior Rooney, is thicker than water and the father must side with his own son even when Connor goes beyond the pale and murders innocents. Newman effortlessly fleshes out his character of the aging mobster. It is a pleasure to watch a master at work.

The rest of the cast also proves up to the task of bringing life to their respective characters. Young newcomer Tyler Hoechlin is remarkable as Michael Jr., a boy who craves the attention of his father. Little Michael has, for a long time, suspected that his dad's job is dangerous, but isn't quite ready for the real truth when he sees big Michael ply his trade. It is an auspicious debut for a budding new talent. Jude Law has some good fun as a combination of personalities. One half of his Maguire character is like 40's crime photographer Arthur "Weegee" Felig and has a knack for capturing the grit of murder scenes on film. The other, hit man half is fully capable of providing all the victims for his photographs. Law slouches with bad posture and saunters along, duck-toed, belying his underlying deadliness.

There are a plethora of smaller, well-crafted roles ranging from Stanley Tucci as gangster Frank Niti who comes across more like a corporate exec rather than the head of Murders, Inc. Jennifer Jason Leigh, always a pleasure to watch, is, unfortunately, given little screen time as Michael Sr.'s loving wife Annie. Dylan Baker puts an amusing spin on his character, Alexander Rance, a fey accountant for the mob. The talented character actor Ciaran Hinds is limited to a very small amount of screen time as one of John Rooney's underlings. Daniel Craig is perfect as Connor Rooney, John's son, the heir apparent to his father's gangland throne and acts the part of the spoiled scion who believes that he is above the law, even mob law.

The best thing about "Road to Perdition" is the outstanding suite of technical values that are an embarrassment of riches. First and foremost, the amazing photography by 74-year old Conrad L. Hall begs for attention come year's end. The range of the images the senior lenser captures is simply astounding. One scene, when young Mike is riding his bicycle down a snow-covered hill is like a painting being created before your eyes. Virtually every scene in the film is a masterly creation that is, for me, the number one reason to see "Perdition." (Oh, sure, Hanks and Newman are OK to watch, too.)

Other techs shine out, like the incredible realism of the costumes (by Albert Wolsky) that exude the look and feel of the early 30's. Fedoras, overcoats and wide lapelled suits make you feel like you are there. Production designer Dennis Gasner went to extreme lengths to place us in the midst of the Depression in scene after scene - especially one, where Michael leaves his son in a huge waiting room amidst a sea of newspapers being read by the unemployed masses. It nearly takes your breath away. The filmmakers must have collected every available make and model car of the era to help makes us feel like we are there.

The source material may have been routine, but the acting and production are craftworks that should not be missed. I was hoping for great but I can certainly live with very good. The "Road to Perdition" may be a bit bumpy but is worth the ride.