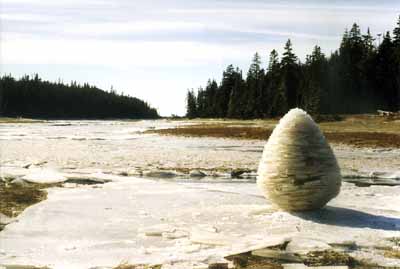 Scotsman Andy Goldsworthy is an artist who uses the shapes provided by Mother Nature in creating his work, except he takes it a step further and integrates these works with the natural surroundings that influence him. Documentary filmmaker Thomas Riedelsheimer takes the man's artwork even further and brings it to the screen in the visually stunning "Rivers and Tides: Andy Goldsworthy Working with Time."

Scottish sculptor Andy Goldsworthy needs the land and gets his nourishment from art, his work giving the phrase 'living off the land' a fresh definition. Documentarian/cinematographer Thomas Riedelsheimer showcases Goldsworthy's creations from and in nature in "Rivers and Tides."

Just as mathematicians look for patterns in nature, Goldsworthy finds common shapes and juxtaposes them against contrasting and complementary settings. People commonly make sand castles and snowmen, only to see them eroded by water and sunshine, but Goldsworthy's works transform themselves into new ones as they break down. His art expands even further in the very act of documenting it, as evidenced by Riedelsheimer's artful camerawork.

Using twigs, Goldsworthy creates the inverse of a salmon hole, a man-sized globe with a hole on top that also suggests a fisherman's creel. When the waters rise, it is carried out to sea, spiralling apart. Nature's life cycle is also reflected in Goldsworthy's observation that 'There's so many works I've made that the thing that will bring it to life is the very thing that will cause its death,' said of the brilliance sunlight will bring to an ice sculpture.

After expressing a particular bond with rivers and oceans, we can see the ribbon-like shape of a river repeatedly in Goldsworthy's pieces. He forms a curving sculpture with molded icicles by the seashore and Riedelsheimer frames it against an opposing, jagged landscape. Leaves are made into a chain to drift down flowing water. Describing the stability of stone as 'really fluid and liquid,' the artist places shards of shale in the shape of a pinecone which the ocean will claim when the tide comes in and give back when it goes out. The work takes multiple attempts, caving in as Goldsworthy comes to an 'understanding of the stone,' and he berates the filmmaker for being useless and not helping as time runs out and the water approaches. Noting a proclivity for this seedlike shape, we see another example, this time composed of ice in front of the pine trees its shape gives birth to.

At his home in Pepton, Scotland, the Angus cattle use their owner's sculpture as a scratching post. Sheeps' wool is used for textural effect on another. A rock wall is a natural ribbon, part of the landscape rather than a divider of it. Andy Goldsworthy lives and breaths art with a genius for reflecting nature back upon itself. Riedelsheimer's stunningly beautiful document of the purity of an artist reflects his own artistry.

"Rivers and Tides" is, in a word, beautiful. Andy Goldsworthy uses nature not only as the influence for his visual art forms, he also incorporates the work into the environment and uses what nature provides to create his visual poetry. The winding ribbon of a river, the tendrils of a vine, a whirlpool and, even, a spider's web provide the stimulus for Goldwsorthy to create images complementary to their source. He uses chunks of shale to build a giant stone "pinecone" at the edge of low tide. He shapes pieces of ice into a flowing form that resembles the winding river and finishes his creation just as the setting sun illuminates the sculpture, to a sigh of satisfaction from the artist. There are a number of examples of these beautifully visual works throughout the film.

Documaker Thomas Riedelsheimer complements the efforts of the artist, Goldsworthy, with his own artistic camerawork. The combination of the stunning images that the artist creates and the wonderfully composed filming of each work makes the documentary a work of art unto itself. The filmmaker, as Goldsworthy diligently sets to the task of making a new art work, keeps his camera close to the effort, not giving away the full extent of the creation until completed. He then draws away to reveal the finished work while the artist provides insight into his understanding of art, life and nature in a cogent and interesting manner.

Goldsworthy is a true international artist as he brings his mind and its creations to various locales on both sides of the Atlantic. He travels from what looks like the coastal wilds of eastern Canada to his home base of Penpont, Scotland to southern France to upstate New York where he stages the massive project of building a stone wall that travels for miles across the land and resembles a flowing river.

Some of the art works are deliberately built to self-destruct since, the artist admits, the destruction of his art is art itself. Others works, like the giant shale pinecone built on the edge of the sea, have a semi-permanent life as the tide engulfs the work but doesn't destroy it. The works of the artist are many, imaginative and beautiful to look at. Their organic roots make them an integral part of the nature they emulate.

"Rivers and Tides" extols Andy Goldsworthy's vision of creating art from and in nature and does it with painstaking care. When he spends hours and hours carefully putting together a delicate "spider web" of sticks suspended from a tree only to have a puff of wind blow it down, he simply takes a deep breath and starts all over again. The dedication is palpable and, with the stunningly beautiful art he creates, a treat for the eye.

Thanks to artist Andy Goldsworthy and docu-maker Thomas Riedelsheimer for bringing this terrific organic art to us who may not have the chance to trek to the wilds of Scotland to catch a glimpse of these fragile and fleeting forms.