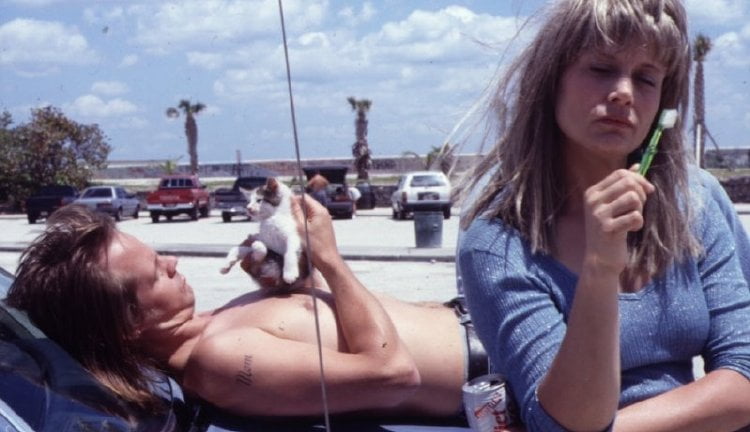 Cozy (Lisa Donaldson) is a lonely young woman in a loveless marriage and does not even like her own kids. Instead, she has dreams of being a great dancer and acrobat. Hanging out in a local bar one night, she meets Lee (Larry Fessenden), a ne’er-do-well with a gun, and things go badly wrong in the Everglade’s “River of Grass.”

Cozy (Lisa Bowman), named after her dad’s favorite jazz drummer, is a dissatisfied housewife and mother living in Broward County wondering if her life will be guided by her own mother’s abandonment and if there is anyone out there as lonely as she is. Turns out there is. Lee Ray Harold (Larry Fessenden) is thoroughly aimless in Dade County and when the two meet up in a bar, a crime they don’t actually commit will take them on a road to nowhere in the “River of Grass.”

Although cowriter (with Jesse Hartman)/director Kelly Reichardt ("Wendy and Lucy”) has become strongly associated with the Pacific Northwest, she grew up in Florida, the daughter of a detective just like her main character here. But for those who haven’t seen Reichardt’s 1994 debut, its location will not be the only surprise, its absurdist humor of coincidence within its hilariously underwhelming crime spree casting it as distinctly different from her character driven dramas. It perhaps has the most in common with her latest, “First Cow,” which also employs her favored, boxy 4x3 aspect ratio, a dog, and a couple of strangers bonding over criminal acts with gentle humor.

The film begins with a series of stills as Bowman narrates her life so far, including an early marriage and home bought on the cheap due to the murder of the husband by his wife which Reichardt recreates in gory b&w splendor, a dual foreshadowing of a sort. We then witness a cop, Jimmy Ryder (Dick Russell), losing his revolver in a series of incidents, the last chasing a suspect out of Cliffords Restaurant.

The gun is found by Doug (Michael Buscemi, "BlacKkKlansman"), which is how it makes its way to Lee, who we see casually aiming it out of the driver’s window of his blue Malibu after his grandmother changes the locks on him. Reichardt crosscuts with Cozy curling her eyelashes and Ryder playing drums as her camera pans over his crime books. Cozy walks out of her house, a baby left unattended on the couch, and cuts across a cow field to cross the highway where she’s almost run over by Lee, a conversation starter when she finds him sitting in the same bar she was headed for. Their evening ends with a swim at a private pool Lee tells Cozy he’s allowed to use, clearly not the case when the owner comes out of the house. Unfortunately for them, Lee was showing Cozy how to aim his gun and in her panic she shoots.

The two immediately scramble over the fence, deciding their only option is to go on the lam. They barely make it out of a motel room neither can afford to pay for as Ryder’s buddy J.C. (Stan Kaplan) connects his friend’s missing gun with his daughter’s disappearance.

While this seriously independent film features the blunt editing (by producer/star Fessenden) and unsophisticated sound of low budget filmmaking, Reichardt’s amusing aspiring outlaw movie surprises at every turn, having more in common with the early work of Jim Jarmusch than her own later work. It received a 2K DCP restoration from the 16mm negative in 2015.

I kept wondering, after watching “River of Grass,” of other, similar two-young-people-on-the-lam-for-crimes-committed movies. At first, I thought of “The Sugarland Express” and checked that film out. Not the right one. Then, I remembered a movie from way back in 1973, Terence Malick’s “Badlands” with Martin Sheen and Sissy Spacek.

Writer-director Kelly Reichardt debut film, from 1994, tells a story similar to “Badlands” except for one thing. Here, there is an amiable cluelessness to our two lead characters, Cozy and Lee, and, yes, there is a gun. But, there is not a violent bone in either of them (well, maybe one of them) and the crime they think they committed is just an illusion of their perceived badness.

Lisa Donaldson embraces the hopes and delusions of Cozy. When we first meet her, she is “taking care” of her brood of kids, like filling the baby’s bottle with Coca Cola then blithely giving it to her youngest. This immediately sets the tone of Cozy’s selfish personality – getting dolled up and, leaving the kids by themselves, heads to the local bar where she meets Lee.

Larry Fessenden has been a writer-director-editor-cinematographer indie film juggernaut for many years. He was also an actor and, as Lee, he gives a minimalist performance as a stoner-slacker and acts just as you would expect from a stoner-slacker.

Lee still lives with his grandma, does not have job and, little does he know, granny plans to throw him out. Meeting the self-possessed Cozy proves to be a big change for the slacker, especially after a friend gives him a gun - a separate but important story thread. Lee invites Cozy to go for a swim in a “friend’s” pool. Something happens and the two take off to avoid the law.

You cannot exactly call this a love story. Well, Cozy does love herself and Lee is on the clueless side but, as they try to get to their perception of freedom, you take a liking to the odd couple in a way that makes you feel sorry for them. Until, that is, the finale.

Director Reichardt, in her debut, shows the talent that would emerge and solidify later in her career with the likes of “Old Joy (2006),” “Wendy and Lucy (2008),” with a wonderful performance by Michelle Williams, and “Meek’s Cutoff (2010),” again with Williams. I always find it interesting when seeing the first work of a talented filmmaker.