Riding in Cars with Boys 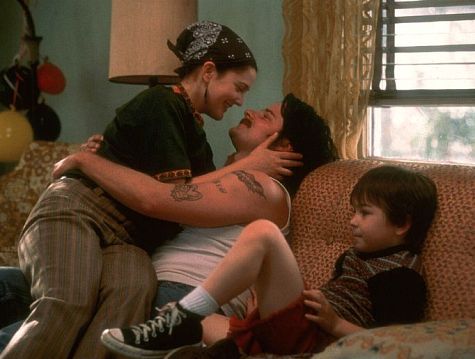 Since her preteen years, Beverly Donofrio displayed a passion for two things - writing and boys. While her policeman father (James Woods) encouraged the former, her pursuit of the latter derailed her dreams for decades when she became pregnant at age fifteen. Drew Barrymore stars in the biographical adaptation "Riding in Cars with Boys."

The film begins in 1950 with a brief scene of Bev at age eleven (played too energetically by Mika Boorem of "Hearts in Atlantis") embarrassing her father with bra talk in his squad car before they break into a duet of "All I Have to Do Is Dream." Advance to 1986, where Bev and her resentful twenty-year old son Jason (Adam Garcia, "Coyote Ugly") are travelling to get a book release signed by the father (Steve Zahn, "Happy, Texas") Jason hasn't seen in almost ten years. 'All life is is four or five days that change everything,' Bev declares before we're sent back to the day in 1965 that dramatically altered her direction.

Bev, best friend Fay (Brittany Murphy, "Don't Say a Word") and Tina (Sara Gilbert, TV's 'Roseanne') wear head kerchiefs, trade clothes and pursue boys. When Bev gives a poem to her crush, football star Sky Barrister, at a party, he cruelly shares it with his buddies. Crushed, Bev goes to lick her wounds and is consoled by admiring dropout Ray Hasek (Zahn). He gets chivalrous, punches Sky, and is rewarded by a hot and heavy make out session in a parked car, even though he warns Bev that he's no good. Months later, she's pregnant, they're married and Ray's actually managed to procure a home for them, with a little help from her dad. But life becomes a series of one disappointment after another as Bev loses a scholarship because of her motherhood and Ray's addictions take their toll. By the time Jason's eleven, Bev kicks Ray out.

As adapted by Morgan Upton Ward and directed by Penny Marshall ("A League of Their Own"), Bev endures an irresponsible, albeit loving man and inconvenient kid, but we never get to see Jason's teenage years when Bev finally managed to write the titular book. That missing decade not only throws the balance of the film off, but denies the audience a chance to feel any sympathy for Bev's struggle. In the end, everything's neatly patched along the side of the road, complete with another paternal duet, and the whole thing feels unearned.

Barrymore's good, but it's Steve Zahn who really shines as the well meaning loser. He's heartbreaking when we meet up with him again, a wreck of a man living in a trailer with a shrewish wife (Rosie Perez), who gives what he can as he always has. Brittany Murphy, a promising young star, is fun as Bev's true life partner and her costar from "Don't Say a Word," Skye McCole Bartusiak, is also notable as Fay's daughter Amelia at age 8. James Woods is two note as Mr. Donofrio - either disappointed in his daughter or singing with her.

Technically the film is pro, although I noted at least three mismatched edits. Production design captures each of the decades represented with a small town, homespun feel. Hair and makeup help Barrymore cover thirty years.

"Riding in Cars with Boys" has its moments along the way, but it sputters and stalls before completing its journey.