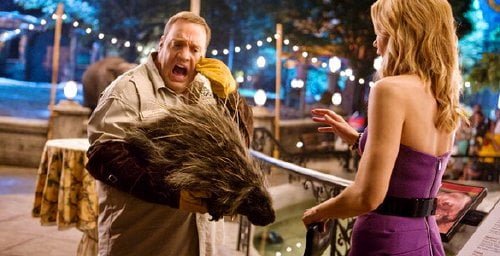 The animals at Boston's Franklin Park Zoo panic when they find out that Griffin Keyes (Kevin James) is leaving his job for something a little more attractive to the ladies. This news drives them to break their code of silence in order to teach him natures way to woo a woman in hopes of keeping their beloved "Zookeeper."

REVIEW CAVEAT: As there were competing, overlapping screenings, I was only able to view the first 52 minutes of "Zookeeper," so this review is my impression of the film without having seen the ending... ...and I was surprised by how enjoyable what I saw was. Last summer, the "Zookeeper" production severely restricted my usual parking spots for film screenings, so I was already predisposed to dislike it. Then there are the five screenwriters and just the concept of Kevin James and talking animals. It didn't work way back with "Dr. Dolittle," so it seemed to have less of a chance now. But what I found was something with real warmth, a concern for animal welfare, and, most amazingly, a film that didn't have a single fart or poop joke in it (as was confirmed by a colleague). Of course, you have to get beyond things like Kevin James being a love interest between the gorgeous Rosario Dawson and trophy object Leslie Bibb and the fact that there's a giant plug for TGI Friday's, but James is likable enough to just about get away with it (Friday's is worked into the plot - badly - as a sort of Shangri-La fantasy of Bernie the Gorilla's (voice of Nick Nolte), even though when he finally gets there he orders off menu). And for those who like their filmic geography to be realistic, there's a bicycle chase that starts in the Boston Public Garden, continues onto Commonwealth Ave. and then mysteriously jumps back to the head of the Boston Common at the steps across from the State House. And although I've personally never been to the Franklin Park Zoo, I'm pretty sure you can't see the Boston city skyline in the distance from the entrance. But the film does more right than it does wrong. The film opens with a prologue in which Griffin has arranged for an elaborate marriage proposal to Stephanie (Leslie Bibb, "Iron Man's" Christine Everhart), on horseback on a beach with a message in a bottle, a Mariachi band and fireworks. Her turn down tells us everything we need to know about her (and wonder why a nice guy like Griffin would be so blind to her shallowness). Five years later, Griffin's now the Lead Zookeeper at Franklin Park, where his genuine love for the animals is evident. He especially goes out of his way to try and interact with Bernie, who, because of a past incident, has been isolated in a cement pit. He also has a great platonic (obviously fated to change) relationship with Park vet Kate (Rosario Dawson, "Unstoppable") who he teams up with to save the choking lioness Janet (voice of Cher, in peak form here). It is this act of bravery that makes her mate, Joe the Lion (voice of Sylvester Stallone), determined to help the poor schmuck out. When Griffin's brother Dave (Nat Faxon, "Bad Teacher") gets engaged, Griffin throws a party at the zoo. Dave's fiancee Robin (Steffiana De La Cruz, "Paul Blart: Mall Cop") just happens to be friends with Stephanie, whom Griffin hasn't seen in five years. He's unhinged by her presence, but she's encouraging. Mollie the Giraffe (voice of Maya Rudolph) overhears Stephanie telling Robin that Griffin 'has potential' and the animals begin to plot. The next day, Joe gets out of his enclosure (Donald the Monkey (voice of Adam Sandler), played by "The Hangover Part II's" Crystal, is a champion lock picker) to threaten the two women so that Griffin can play the hero. When Griffin muffs it, Joe breaks the code in frustration ('What the hell is wrong with you?'). At first Griffin thinks he's gone mad, but finally the animals come clean and begin offering him tips. Best of all, Bernie finally chips in. Usually films that feature real animals speaking have so obviously used CGI fakery it's distracting, but the team behind "Zookeeper" have produced the best looking mouth movements on screen to date. The vocal cast are exceptional as well, with Sandler the perfect fit for the hyperactive monkey, Stallone and Cher delightful as the lion pair, Jon Faveau and Faizon Love amusing as a pair of male bears, Maya Rudolph as the gossipy giraffe and Bas Rutten ("Paul Blart: Mall Cop") giving Sebastian the Wolf an unexpectedly light touch. (Au courant comedy savant Judd Apatow provides the voice for Barry the elephant, who I mistakenly thought was a girl.) James does the requisite pratfalls but also exhibits a genuine comaraderie with the critters and a true lovesick longing. It doesn't really make much sense that he'd be related to the condescending Faxon, but the film needs opposing forces and provides them in simplistic fashion. Bostonian Donnie Wahlberg is a good addition as the less-than-aboveboard handler Shane, the ubiquitous Ken Jeong spins out another unappealing weird creation as reptile keeper Venom and Adam Sandler's wife Jackie makes for an appealing and natural TGIF Waitress. Director Frank Coraci ("The Wedding Singer," "The Waterboy") pops up every few years, usually for Sandler, and he's the man responsible for some of Sandler's better output. "Zookeeper" is pure commercial comedy fodder and not of the highest order, but for what it's set out to do, it's done surprisingly well.