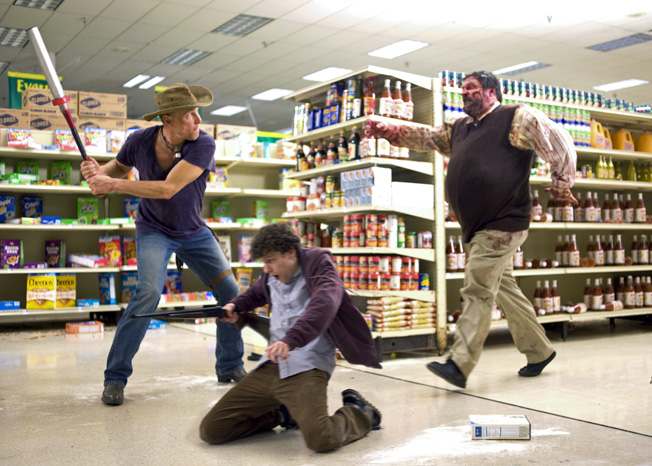 Zombies. Ugh! You have to hate them, especially when you think you are the only living human being left on earth. This is the case for Columbus (Jesse Eisenberg), a scared, shotgun-toting young man who survives the new millennium plague by strictly adhering to his list of rules. He is shocked when he meets Tallahassee (Woody Harrelson), a tough, seasoned Zombie killer who wants just one thing in life: a Twinkie. The duo embarks on a trek that will take them across the land that is the United States of “Zombieland.”

Garland, TX, where a young man (Jesse Eisenberg,"The Squid and the Whale," "Adventureland") ever after dubbed with the name of his hometown resides, is more desolate than usual lately. We're told by Columbus that a virus has turned most of humanity into flesh-eating monsters. But Columbus has a set of rules on how to survive in "Zombieland." A debuting director, Ruben Fleischer, and "The Joe Schmo Show" scribes Rhett Reese & Paul Wernick serve up one of the year's most entertaining films in "Zombieland," by concocting a few riffs to keep playing on and coming up with the inspired casting of Jesse Eisenberg and Woody Harrelson as a perfectly mismatched buddy team. Eisenberg's Columbus is a stay-at-home nerd who only learns of what's happening outside when his ultra-hot neighbor, who lives in apt. #406 (Amber Heard, "Pineapple Express"), comes banging at his door for help. Columbus, who names everyone after where they reside, awakens the next morning to find himself being attacked by 406. He quickly devises some ground rules like #2 The Double Tap, #3 Beware of bathrooms, #4 Seat belts and later, rule #31, check the back seat that serve him well when he takes to the road to return home. Along a patch of congested highway, Columbus meets Tallahassee (Woody Harrelson, "Management," "Seven Pounds"), a lawless type who finds Columbus annoying, and yet the two quickly bond, especially after they're played and left weaponless and without Tallahassee's beloved four wheeler by sisters Wichita (Emma Stone, "The Rocker," "The House Bunny") and Little Rock (Abigail Breslin, "Little Miss Sunshine," "My Sister's Keeper"). When the two duos cross paths again, Wichita takes pity and they become a foursome who decide to keep together until they can get Little Rock to Pacific Playground amusement park. That rule about bewaring bathrooms segues into some subtle bathroom humor, of which the funniest - 'Who's the big BM?' segues into perhaps the best joke of all, and Tallahassee's quest for a Twinkie is rather amusing, but Tallahassee's cocky violence that is also a means to venting his rage segues into the film's lamest sequence, when the foursome smash up a Native American Indian gift store for the heck of it. It's not pretty behavior from four of the last remaining humans on the planet, who one would think would be looking to preserve what's left of their world rather than destroy it. The filmmakers do get in lots of great visual gags, including the opening credit historical 'footage' of the early days of Zombieland, featuring a tasseled stripper going after a tip and 3-legged racers both feral and frightened. Fleischer keeps a rat-a-tat pacing with Columbus's hip 'rules' graphically descending into the action, but the film does have a couple of dips around the midpoint. Still he shows a strong talent for establishing and maintaining tone. Eisenberg, who finds himself in kind of a demented sequel to his last film "Adventureland," is terrific here, a nerd with an inner confidence in his own abilities, and Harrelson is just plain funny. Stone is slick as Columbus's tricky love interest and Breslin holds her own. A surprise guest player (yes, the 'big BM') entertains immensely, although his untimely demise is an obvious gag. By the time they get to the playground, a bit of repetition sets in, but the film's heart doesn't give out. "Zombieland" is great fun, sure to be overrated on first appraisal, but a rollicking good time nonetheless.

Zombies have been a staple for the horror film genre for many years, especially after George Romero’s excellent 1968 cult classic “Night of the Living Dead.” However, comedy zombie movies are a rarity with “Shaun of the Dead” and Peter Jackson’s “Dead Alive” the only ones I can think of. (OK, some may say Romero’s zombie franchise has very dark comedy in their number.) Tyro helmer Ruben Fleischer and first time screenwriters Rhett Reese and Paul Wernick place their “Zombieland” among those few. Thing start out in your face as we learn, via Columbus’s voice over narration, that zombies have taken over the world. He tells us about his rules for survival as he journeys toward his home in, you guessed it, Columbus. He is not a brave man, and is the first to admit it, but has great survival instincts that have kept him from becoming a zombie meal. His rules have made life, as it is, possible. For instance, Rule #2: double tap. If you put a zombie down with one shot, always make the second, insurance shot. Or, Rule #4: fasten your seatbelt. “It’s going to be a bumpy ride.” These and other personal laws are delivered throughout the story in a clever, funny way. If there are two people still alive, there must be more, and there are. Columbus and Tallahassee, after a nasty zombie attack, run into two other survivors, Wichita (Emma Stone) and Little Rock (Abigail Breslin). The girls, though, have their own agenda – to take young Little Rock to the Pacific Playground amusement park – and dupe C and T into giving them their guns and take Tallahassee’s Prize Esplanade, too. However, fate takes a hand and they cross paths again, this time realizing they need each other to survive. This all sounds straightforward. So, where’s the comedy? Well, part of it is the small, hilarious ensemble cast. Eisenberg, Harrelson, Stone and Breslin have great chemistry and their individual comic abilities are obvious, making this a fun ensemble. Combine these talented actors with a laugh-out loud script, deftly handled by newcomer Fleischer and we get is a very funny horror comedy that, at once, grosses you out and vigorously tickles the funny bone. And, there is a surprise guest cameo performance that adds another layer to hilarity to a very funny horror comedy. Keep it a secret, though, so everyone can enjoy the surprise. It is nice to see new blood in the comedy movie field, especially horror movies, and this writing and directing team should have a long and happy career ahead of them. “Zombieland” is a great calling card, not because it shows potential, but because it fulfills that potential. Laugh-out-loud is a good thing in a comedy and this one has plenty.